"Clean" star Adrien Brody talks "Succession" & daily injustice: "There is a lot to be angry about"

The actor spoke to Salon about making a character-driven revenge tale, for which he also created the music 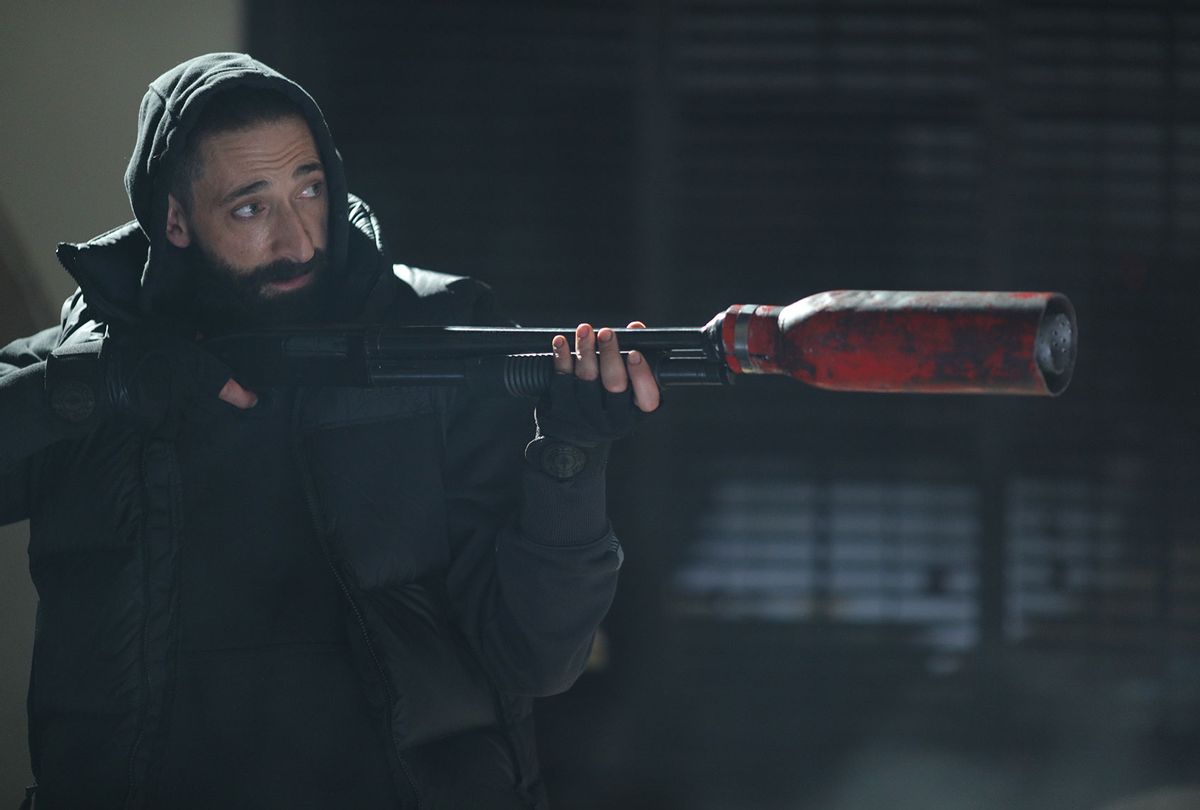 Adrien Brody has a great hangdog expression and it seen throughout "Clean," an intense revenge drama that he cowrote. The Oscar-winning actor stars as the title character in this flinty character study about a garbage man who is seeking redemption and salvation. Clean is "working on" being good; his past — which he "can't wash away" — is revealed over the course of this story. The film takes an interesting turn as Clean's efforts to protect his teenage neighbor, Diandra (Chandler DuPont), lead him down a violent path. Clean also crosses paths with Michael (Glenn Fleshler), a drug kingpin, whose troubled son Mikey (Richie Merritt) knows Diandra.

The gritty film is a passion project for the actor, who also produced and even composed the music and score. It is a change of pace from his recent deadpan work as an art dealer in "The French Dispatch," or as Josh Aaronson, a potential investor in the hit HBO series "Succession." "Clean" allows Brody to go deep and burrow into a character who can fix an Electrolux vacuum, with the same dexterity he employs to build a powerful shotgun. Brody's appearance looks as haunted as Clean is, and yet he is extremely protective of Diandra who gets in a series of dangerous situations.

RELATED: Treated like trash: An immigrant meets a terrible end in the Bronx

The actor spoke with Salon about "Clean" and creating its title character as well as the film's music.

"Clean" is a passion project for you. How did you develop the character? He has interesting physicality and psychology.

I have been wanting to make a film of this nature for many, many years. I love the genre, and I love many aspects of that type of filmmaking. I really wanted to incorporate a real flawed human being at the core of that. Personally, as an actor, I find it is challenging to find the two merged together — you can find a wonderful character piece and you can find a great action role — and I wanted to create that connection between the two and give audiences something meaningful and artistic and relevant to all that is wrong in our society that isn't superficially a revenge story. It is about a man who has failed essentially, and in spite of those failures has persevered and managed to help a younger person, and society as a whole, defend themselves against oppressive forces that bring us all down. It was a wonderful, creative endeavor for me. I've been acting for a lifetime and worked with wonderful filmmakers. I have collaborated in writing, but never have I brought something to fruition that stemmed from an idea of mine. It is ultimately an amalgamation of many things in my life and encounters — things I witnessed growing up in Queens, New York, and films that have influenced me, and filmmakers who have influenced me, and actors and people that I admire. Music influences. It's a remarkable thing to weave them together and share that with people. It's been a long time coming and I'm excited to share that in a theatrical release amidst this difficult time we're all facing.

I like that Clean's kindness is matched by his capacity for violence. He is both hero and antihero, a victim and a vigilante. What can you say about the film's ideas of his recovery, feeling "stained" and "dirty," as well as how one character suggests Clean is a "good man"?

No one is all good or all bad. No one. Real heroes are people who in spite of all they that have done wrong, and all of their failures — or feelings of failure or low self-esteem or regret — are able to surmount those feelings and do good and contribute to good in the world. All that Clean is struggling with — he's in recovery not for past drug use, but to quell this violence within him, He finds purpose with that, and in a way, he is fighting fire with fire.

You dedicate "Clean" to your father, and you have previously told me "having a positive father figure is crucial for our development." Clean is a kindly father figure for Diandra whereas Michael is an imposing father towards his son. I know your father was an inspiration for you. What observations do you have about fatherhood?

Well, I wouldn't be here, and I have the ability to represent all of the things I tried to care for in this world without the thoughtfulness of my own father, and his awareness of the world around him and imparting that sensitivity in me. I did grow up in a rough environment and many of my friends who were wonderful and creative were unable to pursue their calling or their dreams partially because it is just so challenging. Having the support of my mother and my father has given me firm footing. It's not something I take lightly, and I try to honor that gratitude every day and do my best. Again, it's about doing what you can and with the means you have. That's what Clean really became aware of later in life through his failings. He just worked towards being a better man.

What can you say about your own evolution as a man? Ten years ago, you told me of your efforts to step outside yourself and address pressures, to adapt and accept things "the conflict within us is resistance." The world has changed considerably since then, with the #MeToo and Black Lives Matter movements. What observations do you have about responsibility and despair?

I think we are all able to see that there is a new level of despair that has permeated with multiple factors — COVID, and us as a nation witnessing how injustice is still prevalent. Part of the storytelling of this film is to represent injustice and it is something I struggle with daily. There is a lot of inequality in this world and that effects every race and every people. We have to work together to surmount that.

You just talked about inequality and that makes me want to ask you about "Succession" and if you anticipate a return to that show? Viewers seemed to demand more of you. 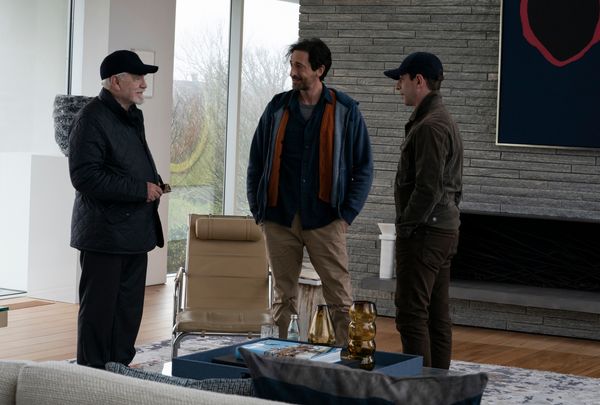 [Laughs] Everything that is wrong with America is represented in that show! [Laughs] That was a whole different turn. That's the beauty of being an actor, you get to explore so much and be able to play people from all walks of life and see different perspectives. I feel blessed to be able to understand that.

You lean towards playing intense characters. I think of your role as a substitute teacher in "Detachment," as well as, of course, your work in "The Pianist," among other films. Clean tamps down his emotions, but we can feel, from your performance, the rage simmering underneath his poker face. Can you talk about why you gravitate toward dark roles?

[Laughs] Most actors are probably pretty complicated people. [Laughs] I'm grateful to have the ability to [act]; I'm drawn to understanding. I strive to understand ambivalence about things and there is a lot to be angry about, and a lot of moments of isolation, and those are common feelings for many of us. Those characters are the most interesting to me, frankly. Someone who is flawed and real. "Detachment" is a similar story in many ways. He's a guy who deals with great turmoil internally, lots of trauma and things that are keeping him back, and yet in spite of that, he manages to lift up these children and give them a sense of hope and a sense of self-awareness of where they are in society and the importance of education and not let forces further oppress them. They have to have a presence of mind and body and gain self-esteem through the work and become their own leaders. They are going to be our leaders. That's all meaningful.

What prompted you to create the music for this film? Was that part of creating the film's vibe? How did that help you flex your creative muscle?

I didn't intend to initially. I did a film many years ago before "The Pianist" where I was going to score the film. I have been making music since I was 19. I haven't done anything with it cohesively. I make beats, I sequence music, and I compose with digital music making equipment and it's a collage of sounds. What I understand about myself and the music that comes out of me is a similar melancholy longing as some of the characters I gravitate towards. As I was filming, I would come home and as a meditation, I would make music, and that haunted yet driving rhythmic structure is within me and my work. I'm a painter as well. It's in my artwork. It felt very right emotionally, and it felt like it would enhance the storytelling. So, I came up with a theme for "Clean" and started making moments and feelings and ultimately felt that this was the perfect opportunity for my music.

It was amazing thing to collaborate with an orchestra and have someone playing French horns over a synth horn that I constructed a melody, and have it come to life being mixed and mastered. I created not only this cohesive, elaborate piece of music but also a soundscape that further tells the story of this cacophony of oppressiveness that is everywhere — sirens and the fighting outside your door, and urban life and the pressures of that on people. I grew up in that, so I was able to weave that in in a very authentic manner. I didn't want to turn that over to someone else. That's why I handled that. It was very exciting, and it was a real breakthrough for me. I'm very proud of the project as a whole as a creative endeavor and I am excited to share music after all these years.

"Clean" is in theaters and VOD on Friday, Jan. 28. Watch a trailer for it below, via YouTube.