The ousted CNN Worldwide head saw the show potential in the news, which made him a character people loved to hate 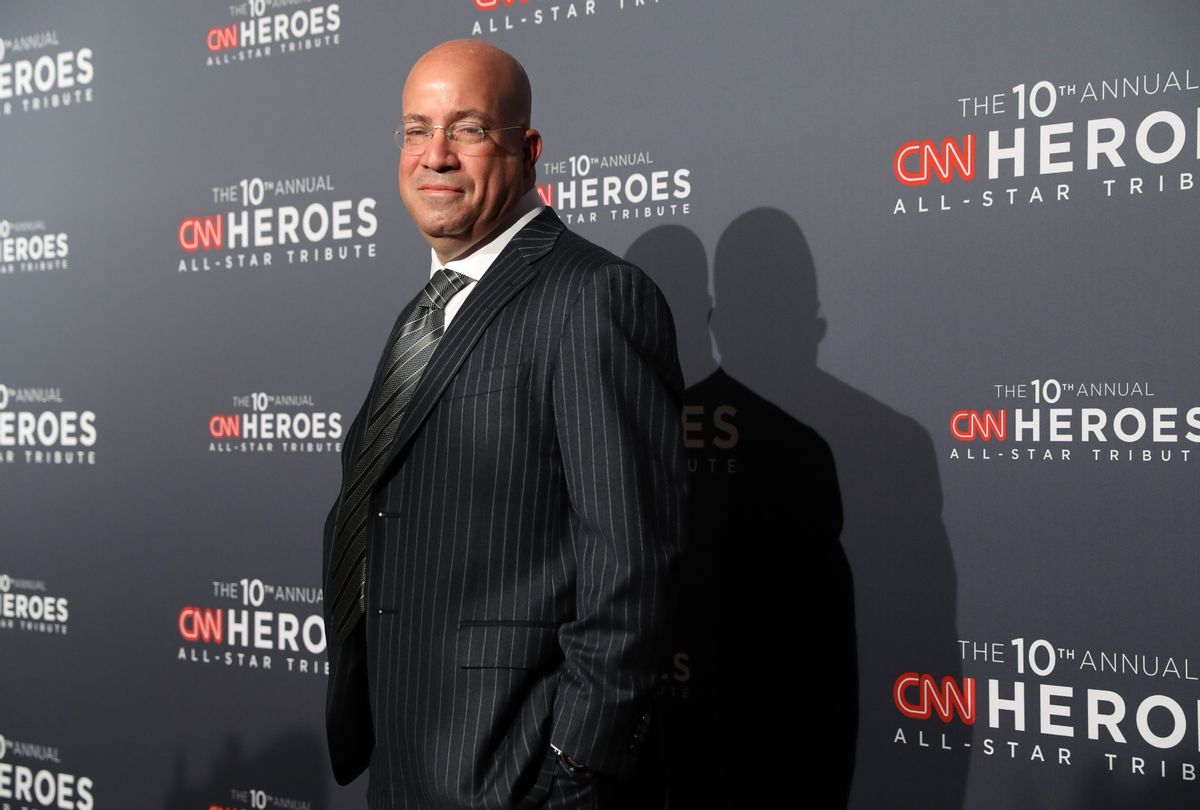 Jeff Zucker has a yen for viewing humans as TV characters. In theory, this should have made him an excellent network executive.

In practice, he proved to be a terrible programmer.

We got that clue when he became NBC's entertainment president in 2000 and drove it from first place to fourth by, among other sins, betting on Emeril Lagasse's appeal as a sitcom star.

We've reaped the results of that paradigm during Donald Trump's political career – the former host of "The Apprentice" being one of Zucker's greatest character development stories at NBC. As the chief of CNN Worldwide, Zucker enabled Trump's rise from his candidacy through a presidency which was in part (but not entirely) delivered to him via an estimated billions of dollars' worth free media coverage on CNN and other 24-hour news channels.

None of that is the reason that Zucker was suddenly pushed out of his position as the president of CNN Worldwide after nine years. Zucker's official statement is that he resigned, but according to CNN's Brian Stelter and Oliver Darcy's sources, he would have been terminated if he hadn't tendered his resignation.

The official reason is Zucker's failure to disclose his romantic relationship with executive vice president and chief marketing officer Allison Gollust, one of his first hires at CNN and one of his closest lieutenants. However, Zucker and Gollust's relationship has been an open secret for years, with none other than former "Today" show host Katie Couric dropping hints about it in her 2021 memoir.

In any event, the fact that the average person knows anything about Zucker at all is because he has styled himself to become a character. Zucker probably does not see that as a negative estimation. What he might debate, however, is the nature of his role.

He likely envisions himself as a Cory Ellison, the handsome president of the fictional network news division on "The Morning Show." Ellison's character is in part modeled on Zucker, the man who made his bones by becoming the youngest executive producer of NBC's "Today" and steering it from near-irrelevance into dominance.

But Cory, for all his ruthlessness, is somewhat likable. The real world's audience doesn't see Zucker that way. To the public, Zucker is the one- or two-season guest star who joins the workplace drama ensemble and mucks up the joint. He's the guy who screwed over Conan O'Brien and thought, wrongly, that America was craving more Jay Leno in prime time, at a time when the host's popularity had tumbled.

He's the man who saw the end of "Friends" on the horizon and thought "Joey" would solve that problem.

On the plus side, he's also the guy who was at NBC's helm when "30 Rock" and "The Office" were on. But he is more Michael Scott than Jack Donaghy, a man whose name is synonymous with the phrase "failing upward. "

Nobody bloviates his way into ever-greater positions of power without having the alliances to make that possible. And this has worked for Zucker, a guy who moves forward and selects a few co-stars to bring him without substantially improving the company he's been put in charge of.

This may be why the reaction within CNN to his ouster is mixed.

Zucker may not have done wonders for the integrity of the CNN brand as a news organization, but he did elevate a few careers. Don Lemon told Variety "I just think so highly of Jeff, and he is the best boss we have ever had, and one of the best things that has ever happened to CNN."

One expects Lemon to feel this way, since Zucker plucked him from his weekend anchor post and gave him his own weeknight show in prime time. In doing so he transformed Lemon from a punchline into an officer in network's prime time Trump opposition forces – a terrific hero role, all told.

Another was Lemon's prime time partner until very recently. Chris Cuomo came to CNN from ABC at the same time that Zucker arrived, in January 2013, as a morning anchor, bumping out award-winning journalist Soledad O'Brien, among others, in the process. (It's also worth noting that before Gollust joined CNN she worked for a brief time as former New York Gov. Andrew Cuomo's communications director.)

Zucker likely recognized that Cuomo had a following for reasons having little to do with his fact-finding skills. To wit, while he hosted "Cuomo Prime Time" he maintained a steady Instagram presence featuring his workouts, including shirtless shots.

CNN already had plenty of personalities in its stable before Zucker arrived, including Wolf Blitzer and Anderson Cooper. The latter has proven over the years that he's an effective journalist on top of being a magnetic screen presence. The same is true of Jake Tapper, who also joined CNN in 2013 and remains one of the network's most respected anchors.

Nevertheless, the onset of the Trump era inspired Zucker to transform the network into a stage for screaming matches between liberal commentators and Trumpian wingnuts, presented as covering both sides with its hosts frequently playing the part of referees as opposed to offering context and adequate fact checking.

Zucker is portrayed as being very hands-on with the news operation, transforming a network whose bread and butter was once its wall-to-wall coverage of world news into a pundit farm whose main crop was false equivalency.

In a 2017 New York Times story Zucker likened his legitimization of lie-peddling right-win surrogates such as Kayleigh McEnany and Corey Lewandowsky to casting  "'characters in a drama,' members of CNN's extended ensemble cast."

This compromised the network's best talents despite their efforts to produce useful journalism, which we saw far less of during his tenure. Trump painted CNN's White House correspondent Jim Acosta as a fake news peddler and his enemy, ensuring that fans and foes adore or hate him for reasons having little to do with his actual skills. Still, it made him a central player on this stage, giving him a level of public recognition that he didn't previously have.

The oddly poetic coincidence within Zucker's various defenestrations, first at NBC and now at CNN, is his reliance on the wrong friends and his extreme underestimation of their loyalty.

Making Trump a star earned him the reward of backstabbing and public humiliation, both courted for the sake of ratings.

A surreptitiously recorded 2016 phone conversation between Zucker and former Trump lackey Michael Cohen revealed that on the same day as a Republican primary debate that CNN hosted, Zucker was still referring to Trump as "the boss" and saying, "I want to do a weekly show with him and all this stuff." This received very little coverage because the person who obtained the recording was Fox News' Tucker Carlson.

This was before Trump was elected, remember. When Trump was a candidate, CNN devoted outsized amounts of uninterrupted airtime to his campaign rallies, including shots that lingered on empty lecterns with chyrons hailing his imminent arrival.

When Trump was president, he painted CNN as the enemy and insulted Zucker regularly even as the network placed his liars on the payroll.

As for Chris Cuomo, Zucker encouraged his on-air playtime with Andrew despite the ethically questionable nature of it. He also protected Chris after it came out that he helped coach Andrew on how to respond to the multiple sexual harassment allegations brought against him . . . that is, until he couldn't.

According to an analysis in The Wrap, the network gained ground in the Trump era but lost a substantial slice of the adults ages 25-54 demographic in prime time over the last nine years – to the tune of 29%.  During the same period, the top-rated Fox News Channel's audience in that demo rose 23% from January 2013.

This brings us to the lasting effect of what Zucker has wrought at CNN. In transforming its newsroom from a breaking news destination into an infotainment generator, he brought a pugilistic energy to the place but never figured out how to keep whatever ground CNN won.

As usual, the ultimate losers were, and are, news consumers. This is how Samantha Bee breaks it down during 2017's "Not the White House Correspondents' Dinner" telecast.

Zucker's greatest success since 'The Apprentice' – which by the way, thanks for that – is filling the airtime between car crashes with a reality show loosely based on the news. Where loyal partisan hacks make us measurably dumber by spewing mendacious nonsense, while a hologram of Anderson Cooper stands by counting the seconds to the commercials for all the pharmaceuticals he probably wishes he could gulp down to sedate himself . . .

Zucker's reign wasn't a complete loser. Similar to how he succeeded in expanding NBC Universal's cable channels while allowing the Peacock to molt, Zucker correctly surmised that digital platforms will be where future audiences will gravitate to get their news. CNN+ launches in late March, with a number of star journalists already on board, including former NPR co-host Audie Cornish and former Fox News anchor Chris Wallace.

He will not be there to oversee that launch although he expected to be, and likely expected a promotion once the merger between Discovery, Inc. and Warner completed. Zucker has a close relationship with Discovery's chief executive David M. Zaslav, according to the New York Times.

Once again, he was watching the wrong show. WarnerMedia's chief executive Jason Kilar, who was perceived as less powerful as Zucker, ended up being the one to demand his resignation. That's not a "Friends" episode. That's going all "Game of Thrones" on your enemy's ass.

But what is dead may never die, which is why this is not a career obituary for Zucker. You can bet he'll pop up someplace that desperate for a temporary ratings win, that isn't too concerned about the long term loss in that overhaul.

More difficult to estimate is whether CNN can recover from their third-place position among cable news networks, which is where they were when Zucker came aboard. But the news and information business is another beast than what it was nine years ago.

Everything analysts say organizations such as CNN should be doing, such as in-depth, thoughtful longform journalism and reporting, hasn't proven to be a successful business model, as shuttered outfits such as Current and Al Jazeera America show us. Propagandizing and outrage drive the business now, and trying to steal a piece of that stream while claiming the middle hasn't done CNN any favors.

As for Zucker, maybe he'll glean some tips from his brother from another fictional mother. The second season finale of "The Morning Show" depicts Cory Ellison on the brink of losing his position after betting it all on a digital streaming service and losing, and backing a star TV personality who lied about her relationship with a sexual predator. Cory also declared his love for that host's co-worker, a woman he hired and championed. Without a control booth to rule, maybe his best bet is to call that writers' room and lend his expertise by suggesting what a man like Cory would do next to yank success out of the deep, stinking bowels of failure.

Now there's something he would be great at.