Lest one forget the tensions lurking beneath the Games, the panda provides an object lesson in shattered illusions 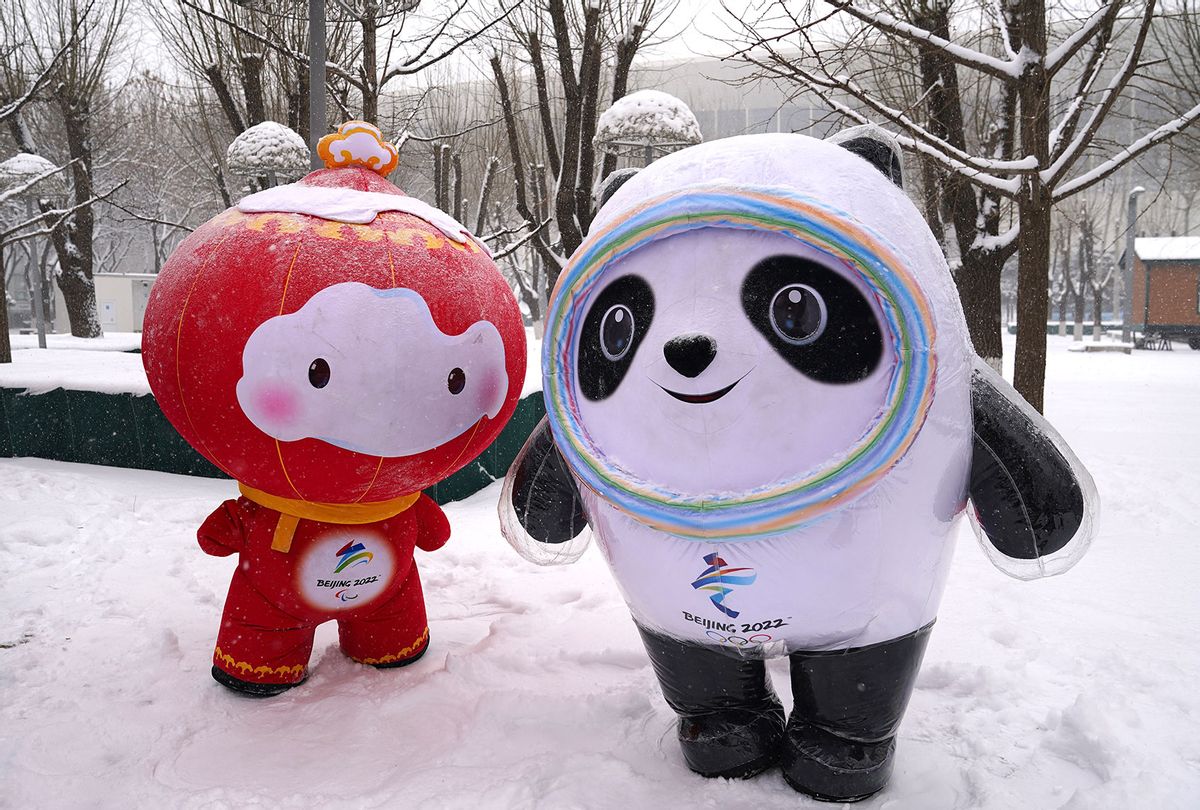 A comet hurtles towards earth while an oblivious panda grasps at a stalk of bamboo. It sounds like the setup for another "fiddling while Rome burns" joke, but we are actually a few seconds into the two-minute ad introducing the official Beijing Olympic mascot. Bing Dwen Dwen, whose name roughly translates to "chubby ice child," is an improbably cute bear: a round panda with raccoonish eyes and a ready smile.

The comet turns out not to be an extinction event but a portal to the Winter Olympics. It conveys Bing Dwen Dwen down a slope, which inadvertently summons Plato's allegory of the cave. Except in this scenario, our panda does not ascend toward enlightenment but descends to a mysterious light source. Landing with a soft thump, Bing Dwen Dwen finds itself surrounded by shadowy silhouettes of athletes snowboarding and skiing. The bear is then sucked into the vortex of the iridescent comet. No sooner is it transported into another dimension than it is encased in a transparent astronaut suit with a rainbow ringing its face.

This is no ordinary suit, however: it endows the panda with lightning speed. We see it effortlessly glide through the air, eat up miles on magically materializing skis, and wield a hockey stick like a pro. It also propels itself to outer space and high-fives an astronaut. The ad stops just short of suggesting the bear has a direct line to the heavens: it advocates a firmly secularized celebration of athleticism.

The official line from the Beijing 2022 Organizing Committee is that the panda's spacesuit — a shell of ice — is meant to be a "tribute to new technologies for a future with infinite possibilities." Yet it also suggests something more insidious: a cryogenically preserved baby. While the animated panda moves around in an infinitely labile suit, plush versions of the toy, which have fueled supply shortages, are all but immovable: one paw is raised in greeting (or is it a salute?) while its entire body is swaddled in a silicone shell.

One option is to liberate the panda from its suit. At this point, though, we are so used to seeing the panda in its obligatory suit in video after video that to see it sans armor delivers a jolt, like seeing a nun without her habit. Yet why should this unsettle us? Isn't the alternative spookier? Who wants to see the potential of children frozen in amber?

RELATED: The etymology of 15 weird and wonderful Olympic words

The two versions of the mascot cancel each other out — or otherwise induce cognitive dissonance when one tries to make space for dual realities. The effect is especially eerie when one compares Bing Dwen Dwen to Jingjing, the panda mascot for the 2008 Olympic Games, also held in Beijing. One of five official mascots for the 2008 Games, JingJing bears a lotus flower on its head, symbolizing the forest. None of the 2008 mascots takes on superpowers — their aesthetic leans more traditional and you get the sense that the mascots would be perfectly content to chase each other around endless loops and nap the day away. Even the ads promoting the 2008 Games are more subdued: one such ad featuring all five mascots is more patriotic tone-poem than paean to technological innovation. In the intervening 14 years, China has secured its status as a global superpower, which it seems eager to reinforce in its determinedly forward-looking promo videos for the 2022 Games.

When the Bing Dwen Dwen ad first premiered ahead of the Winter Olympics, its creator, a professor at Guangzhou Academy of Fine Arts, could hardly have predicted the stratospheric popularity of the mascot. It was panned as "out of this world ugly" and compared to a "sesame ball with its filling leaking out" when it was first unveiled. An aggressive campaign of "targeted promotion," orchestrated by the Chinese government, contributed to its soaring popularity. Twitter — a platform that is not accessible in China — has seen an unusual outpouring of love for the panda. Some of the hype, it turns out, was manufactured. As one news source reported, up to 20% of Twitter accounts expressing fondness for Bing Dwen Dwen were created by the Chinese government in January alone.

That hasn't stopped hordes of consumers from lining up to acquire panda tchotchkes. Its likeness appears on key chains, snow globes, pillows and even an airplane. Facing a supply shortage, many stores have capped the number of plush pandas each customer can buy. It is not uncommon to see hundreds of people camped outside Olympic memorabilia stores in Beijing in the hopes of snagging one of the fluffy toys. Only three factories are authorized to make Bing Dwen Dwen toys, with production being limited to 4,000 toys per day in one of those factories. Replicas of the mascot normally retail for around $30, but in the UK, souvenirs are being resold for up to £317. (The Winter Olympics has another mascot: Shuey Rhon Rhon, an anthropomorphized lantern child who is the ambassador for the Paralympics. So far, there has been no analogous social media craze for Shuey, whom many have derided as "ugly.") Everywhere one looks in Beijing, one sees Bing Dwen Dwen. Eight-foot-tall mascots are especially telegenic: they enthusiastically jump up and down in the stands, cheering on athletes who compete for the chance to win miniature replicas of the panda wreathed in gold.

Then, one day on Feb. 8, all of China's shrewdly banked sympathy for its mascot started to collapse. The incident played out like a gender reveal party from hell. Flouting Olympic protocol, a life-sized panda approached Chinese freestyle skier Yang Shuorui and spoke — in the gravelly voice of a middle-aged man. The offender was a reporter, who had donned an inflatable suit to interview the athlete. In an instant, the widely shared illusion that Bing Dwen Dwen was a loveable baby panda was shattered.

If reality is "nothing but a collective hunch," to quote Lily Tomlin, the imagination is a more seditious bunch — but only up to a point. Many Chinese citizens who took to Weibo, China's Twitter-like platform, to complain agreed upon one thing: the panda should not sound like a 50-year-old man.

"I don't want to hear the avuncular voice of Bing Dwen Dwen. It's just a little cute panda," commented one person. Another also testified to feeling betrayed: "When I went to buy a Bing Dwen Dwen key ring, I could only hear the voice of a middle-aged man." One post critiquing Bing Dwen Dwen's "disgusting" voice received more than 20,000 reposts. The cumulative sense was that a nation had been grievously wronged, as if it had woken up to find a relative donning a Santa Claus costume. All this furor prompted CCTV, which had aired the program featuring the now-notorious interview, to quickly pull it from its website. (For good measure, censors also banned hashtags like "Bing Dwen Dwen talking" in hopes of quelling the controversy.)

It made for an ironic plot twist. The mascot, as some have alleged, was heavily publicized in order to distract the world from China's treatment of Uyghurs. Bowen Yang, impersonating Chinese trade minister and Olympic Games organizer Chen Biao on a recent "SNL" skit, rhetorically asked about an image of Bing Dwen Dwen: "Is this the face of a country that would violate human rights?" A week into the Games, the shoe was suddenly on the other foot: the panda was being condemned for speaking tout court and was even repudiated as a "fake Bing Dwen Dwen" by government officials hoping to dispel this as an adventitious incident.

The panda's media snafu, of course, changes nothing materially for the Uyghurs and other Muslim minorities who are warehoused in Xinjiang province and who face rape, torture, and other acts of violence. Several countries, including the U.S., Canada, and Britain, have imposed a diplomatic boycott of the Games over China's campaign of genocide against Uyghurs. In its opening ceremony in February, China attempted to put up a façade of a peaceable, welcoming nation of diverse ethnicities: it chose Dinigeer Yilamujiang, a 20-year-old athlete of Uyghur descent, to kindle the Olympic flame in Beijing's Bird's Nest stadium — a choice that was met with cries of gaslighting from critics of the Chinese government.

Yet the mascot's Icarian fall hints at something endogenous: the coiled contempt that many nationalist Chinese are ready to spring at the merest whiff of waywardness. There's a distorted sense of scale at work in both China's oppression of 1 million Uyghurs and Muslims and its censorship of an outspoken mascot. That one can mention both in the same breath — that both can be accounted an apotheosis of intolerance — points to a sublimated malaise. China's sanctions in both situations form a pernicious pattern. Just last year, Chinese tennis phenom Peng Shuai mysteriously disappeared after claiming that a former Beijing official had sexually assaulted her. China has also banned foreign athletes at the Olympics Games from making political statements, on pain of facing punishment. Perhaps this should come as no surprise in a country that demands obedience to its national creed and cultural orthodoxy, encapsulated in "Xi Jingping Thought." A habit of self-censorship, to misquote Beckett, "is the ballast that chains a dog to his vomit."

RELATED: "It's not worth it": Karolyis' ruthless gymnastics empire

The case of the vocal bear is not all that it seems. As has been pointed out on social media — with all the post hoc bumptiousness of reply guys — International Olympic Committee rules dictate that mascots are not supposed to speak at all. The idea is to foster the illusion of gender-neutral mascots. Yet one can safely chalk up the "panda-monium" to something more visceral: not the fact that the mascot had run afoul of rules, but that its deep masculine voice was at incongruous, obliterating odds with its youthful visage.

Having heard the deep voice from one Bing Dwen Dwen, one can't unhear it. It's unlikely there would have been such a hullabaloo had it spoken in dulcet tones more befitting a child. The Chinese journalist probably did not anticipate the intensity of the media crackdown. For a splinter of a few seconds, a nation watched as a fantasy of its beloved national animal — as a vivacious child, as an ethereal ambassador for sports, as hospitality incarnate — was brought to its knees. Reality was being reconstituted on the hoof. Instead of silence, there was sound.