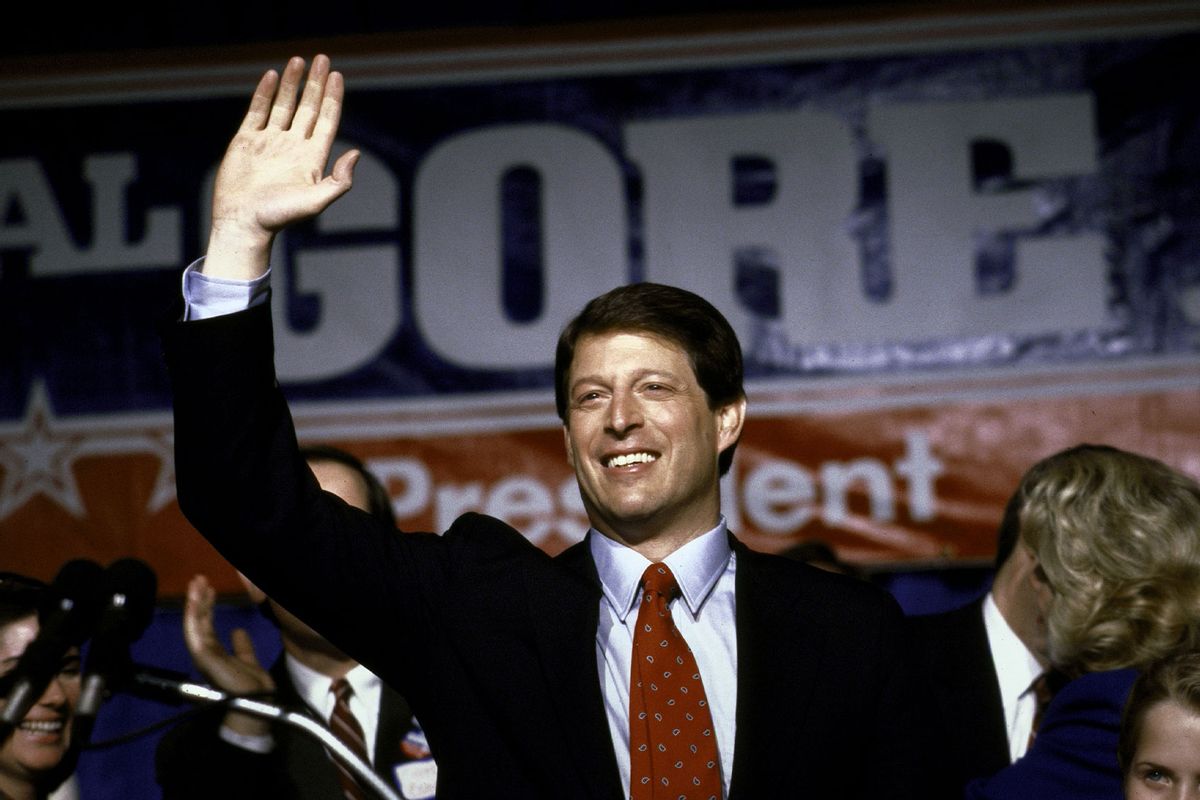 For decades, climate scientists have known this is the case: there is no comparable debate happening in their field over whether climate change is "real"; they have known it is real and consider it established fact. For the rest of us, however, it seems that the confluence of bad natural disasters, extreme weather events, and droughts and floods have slowly changed our minds. Nowadays, it is normal for politicians on both sides of the aisle to speak of fighting climate change. In other words, it is a major (and normal) political issue to talk about.

So it is perhaps hard to remember that wasn't always the case. As recently as 30 years ago, making climate change the centerpiece of your political campaign — much less a major issue — was not necessarily a politically prudent move. Case in point: the first presidential campaign of Al Gore.

Jay Inslee is calling out the Democratic Party on climate change

The year was 1988, and Gore was a 39-year-old freshman senator from Tennessee with a reputation as a technology nerd. (Among other things, he was one of the main sponsors of the 1991 High Performance Computing and Communications Act, which opened up the internet to the general public.) It would be inaccurate to characterize Gore as a progressive during this time; during one of the Democratic primary debates, he insisted that he had a more hawkish foreign policy record than his Democratic colleagues. What's more, as the Democratic field whittled down from more than a dozen candidates to just three — Gore, Massachusetts Gov. Michael Dukakis and Rev. Jesse Jackson — Gore branded himself as a centrist alternative to the liberal Dukakis and left-wing Jackson.

"I made hundreds of speeches about the greenhouse effect, the ozone problem, that were almost never reported at all," Gore later recalled.

This effort failed, and he ultimately did so poorly that he dropped out and endorsed the eventual nominee, Dukakis. In any other scenario, this story would be little more than a footnote in Gore's career. Yet there was one issue in 1988 in which Gore stood out from the pack — not because he was more liberal, mind you, but simply because no one else was discussing it at all. That issue, of course, was climate change.

"I made hundreds of speeches about the greenhouse effect, the ozone problem, that were almost never reported at all," Gore later recalled. "There were several occasions where I prepared the ground in advance, released advanced texts, chose the place for the speech with symbolic care — and then nothing, nothing."

On each of those occasions, Gore drew attention to the same basic problems that he would later highlight in thousands of speeches and two acclaimed documentaries: Since the Industrial Revolution, human civilization has been pumping so-called "greenhouse gases" like carbon dioxide, methane and water vapor into the atmosphere, trapping heat and radically altering the planet's climate. If humanity did not collectively act to limit this type of pollution, Gore warned in 1988, future generations would inhabit a planet much different and worse than their own: More extreme weather like hurricanes, floods and wildfires; massive refugee crises; and a break down in the economy as vital resources become more scarce.

If humanity had listened to Gore in 1988, it would have had a massive head start in grappling with climate change, and may have even been able to avert its most severe consequences.

"I made hundreds of speeches about the greenhouse effect, the ozone problem, that were almost never reported at all. There were several occasions where I prepared the ground in advance, released advanced texts, chose the place for the speech with symbolic care — and then nothing, nothing."

"While I think he did garner some attention for the issue back then (I can still remember), I think there were at least two factors that limited his ability to get the message out as widely as it deserved," explained Dr. Michael E. Mann, a distinguished professor of atmospheric science at Penn State University, who wrote a book on this topic.

Why didn't Gore's message stick? Mann has a few theories.

The first problem was that "the fossil fuel industry disinformation campaign was ramping up their efforts, and the media were very much engaged in false balance, where climate denialism was often granted undeserved prominence," he opines. In addition, the scientific community had yet to reach a consensus that humans were impacting the climate as dramatically as was later discovered to be the case.

"Some scientists, like [Columbia University climate science professor] James Hansen — who was ahead of his time — were speaking out, but the IPCC [Intergovernmental Panel on Climate Change] didn't reach a consensus that there was a discernible human influence on climate until the mid-1990s," Mann pointed out.

In 1988, Gore was preaching to a choir that had not yet been assembled.

Dr. Kevin Trenberth of the National Center for Atmospheric Research worked on a report by the Intergovernmental Panel on Climate Change which, when released in 1995, famously made it clear to the world that global warming was indisputably linked to human activities. Trenberth also described Gore as being ahead of his time — and that this was precisely the reason why his attempts to run for president on that issue belly-flopped.

"In 1988 there was little or no public sentiment toward the idea that climate change was becoming a crisis," Trenberth wrote to Salon. From a geopolitical perspective, humanity was not ready to start having that conversation — major milestones like the United Nations Framework Convention on Climate Change (signed in 1992), the Conference of Parties (set up in 1995) and the Kyoto Protocol (signed in 1997 and implemented starting in 2005) were years in the future. In addition, the scientific research had not yet been completed, with Trenberth writing that he and others had to produce papers on various aspects of climate change in the 1990s to garner more attention to the problem.

"Global warming was seen as a threat, but it was not till 1998 (a paper of mine) and subsequently that changes in precipitation with climate change were properly dealt with," Trenberth recalled. "Prior to then precipitation was just precipitation amount."

"Gore was really out in front on this issue. People didn't really understand what needed to be done."

Dr. Ken Caldeira, senior scientist (Emeritus) at the Carnegie Institution for Science, recalled 1988 as a year "when barges couldn't run down the Mississippi" due to an infamous river drought.

"Gore was really out in front on this issue. People didn't really understand what needed to be done," Caldeira said.

Like Trenberth, Caldeira cited a peer-reviewed paper of his from 1998 as an important one in advancing the frontiers of climate science, one that "looked at what stabilizing atmospheric CO2 content meant for the energy system." Yet that, too, had not yet been released during Gore's ill-fated first White House bid. In 1988, Gore was preaching to a choir that had not yet been assembled.

"We can thank the fossil fuel industry for costly decades of relative inaction. They are the villains in this story. But we can still be the heroes."

"As I argue in the book, they've turned to other tactics in their efforts to keep us addicted to fossil fuels and prevent the needed transition to renewable energy—these tactics include delay, deflection, division, and despair-mongering," Mann argued. "They don't care about the path we take to inaction, they just care about the destination. They want us on the sidelines rather than the frontlines, and the New Climate War is all about how they seek to accomplish that."

Trenberth was more blunt in his assessment: "The politics are a mess. The COPs [Conferences of Parties] are unruly at best and the focus is not present."

This makes one wonder: What if Gore had actually won the presidency in 1988? Or, what if he hadn't won, but his message had at least gotten through? How might history be different today if whoever America put in the White House that year — George H. W. Bush (the eventual winner), Dukakis, Bob Dole, Gary Hart, anyone — had listened to Gore?

"No Trump!" Trenberth remarked. "America might still have real leadership in the world. As it stands that has been lost and is why I am in New Zealand. I could imagine a much more nature-friendly USA and the world, more biodiversity, and less strife."

"We wouldn't be in the mess we're in," Mann wrote to Salon. "We can thank the fossil fuel industry for costly decades of relative inaction. They are the villains in this story. But we can still be the heroes."