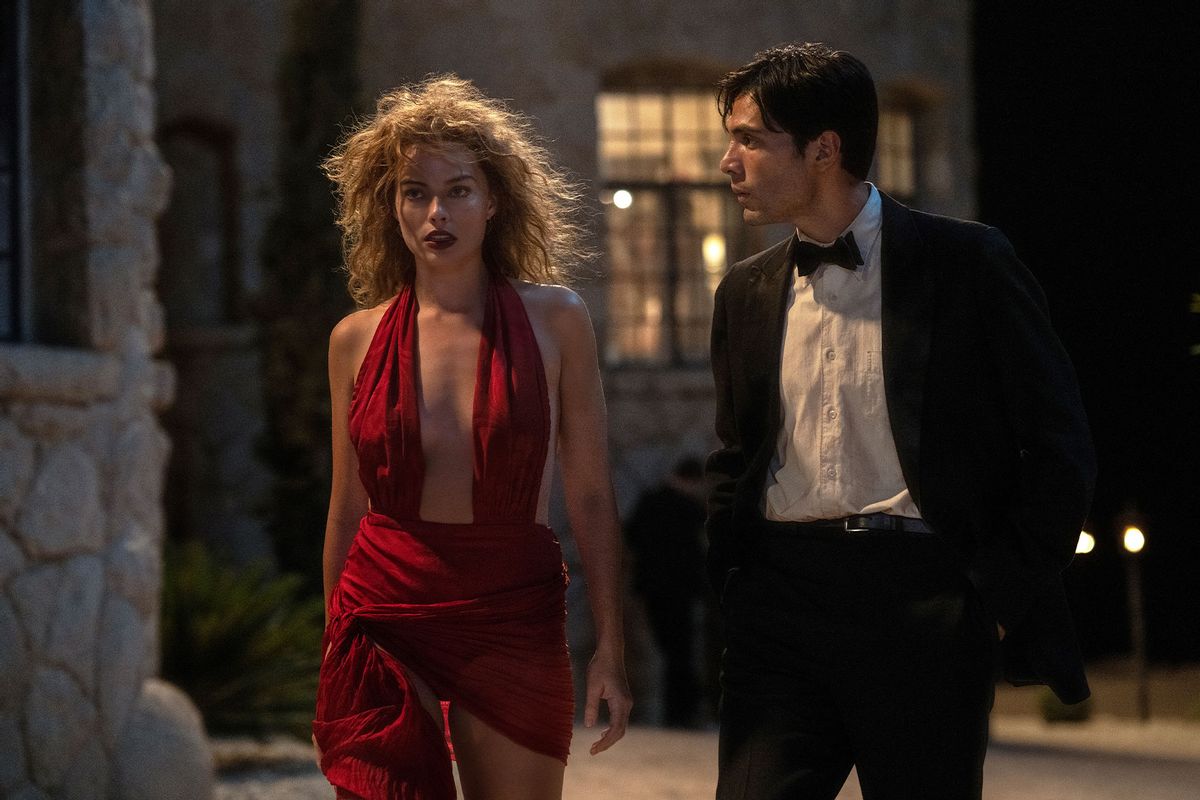 Chazelle's big swing is mediocre at best. In the first eight minutes, an elephant poops all over a man, a woman urinates all over another man, and there are still three hours of excessiveness to go. The elephant and the woman are both "attending" a party in 1926 Bel Air, California where a giant penis almost the size of the little person wielding it, shoots a white substance out onto the adoring, disoriented crowd. It's busy, bawdy, and bad, and it proves the theory that you can have too much decadence on display. Chazelle's direction is in overdrive here, and viewers may suffer, ahem, whiplash.

The worst film performances of 2022

The party is where the film's five main protagonists are first introduced. Manny (Diego Calva) is the elephant wrangler and "fixer" character who solves everyone else's problems —like removing a dead girl during the party without being seen. His finesse also helps Nellie LeRoy (Margot Robbie) crash the party — after she crashes the car she is driving into a statue in the driveway. Nellie aspires to be in movies, and Manny aspires to be with Nellie, as well as work in pictures. Nellie gets her big break when she's chosen to replace the aforementioned dead girl on set the next day. Manny also ends up on set. After being asked to drive the drunk star Jack Conrad (Brad Pitt) home, Jack brings Manny along as his assistant on his latest silent feature for Kinoscope.

The film's two other main characters are Lady Fay Zhu (Li Jun Li), a lesbian singer who also writes the intertitles for Kinoscope's films, and Sidney Palmer (Jovan Adepo), a Black musician. Fay and Sidney each get their own storylines, but Chazelle shortchanges them, just as Hollywood does, by giving them very little to do other than be lesbian/Asian, and Black, and keeping them mostly on the sidelines. Palmer gets a not insignificant storyline, but it feels uninspired.

The initial party sequence lasts about a half hour and when it ends, the title "Babylon" appears on screen signaling the film is only just beginning and it is off to the next "dazzling" vignette. "Babylon" is episodic — it would have played better as a miniseries — and that is part of the film's problem. There is one good idea in each storyline, but it is the same one: Hollywood is a soulless dream factory. It is neither original nor profound. The characters are one-trick ponies who barely get to develop over time — and the film covers almost a decade in their lives (plus a coda).

"Babylon" flickers to life during its second episode starting with a fabulous tracking shot through the moviemaking process which includes dozens of spectacles in the foreground and background. It's a bravura set piece, and one of several vignettes that may have viewers wishing Paul Thomas Anderson had directed the film. (A sequence late in the film which involves a character intermittently spitting, a jump scare and a grotesquerie, echoes a nervy, bravura episode from "Boogie Nights.")

Meanwhile, parallel stories involving Manny having to help save Jack's film by getting a camera in time, and Nellie wowing her initially unimpressed director, Ruth Adler (Olivia Hamilton), with a gutsy performance, unfold. Elinor St. John (Jean Smart), a reporter, dryly observes things from a distance.

Elinor makes witty comments about knowing Proust, while in contrast, Jack drops an unprintable line that begins "Frankly, Scarlett . . ." Such is the film's mix of class and crass as Chazelle rubs viewers noses in both, with a "Look at me, aren't I clever? Aren't you impressed?" smugness that stinks. He has the air of a privileged idiot who wastes his valuable possessions.

Chazelle is mixing highbrow and lowbrow here — there is an extended discussion of theater being art and films being artifice, and there is a vulgar sequence where Nellie disrupts a party first by telling an off-color joke, and then by making a grand mess of things. It is one of the more cringe-inducing moments, not because of the point its making, but because Chazelle goes overboard in making it.

Nothing "Babylon" says is very deep, and Chazelle takes his time to say nothing. A scene in which Ruth is trying to direct a scene with Nellie requires eight long takes with everything possible going wrong until they get it done. It is meant to show the difficulties of capturing the magic, but the scene isn't as magical as the earlier ones with Jack and Nellie. Yes, the stars start to fade as sound changes everything, but viewers' interest in them fades as well because they are not interesting. Perhaps Chazelle's greatest accomplishment here is to make Margot Robbie and Brad Pitt boring.

It is, however, easy to care about Manny, who works his way up to a studio executive position, but that job, which is as thankless as dealing with the elephant, involves having to fire Fay, whose gal palling with Nellie is raising the wrong eyebrows. Manny also has to ask Sidney to make a dehumanizing compromise that is rather offensive. Chazelle cudgels viewers with his obvious points about race, class and sexuality in 1920s-1930s America and there is little emotional impact. 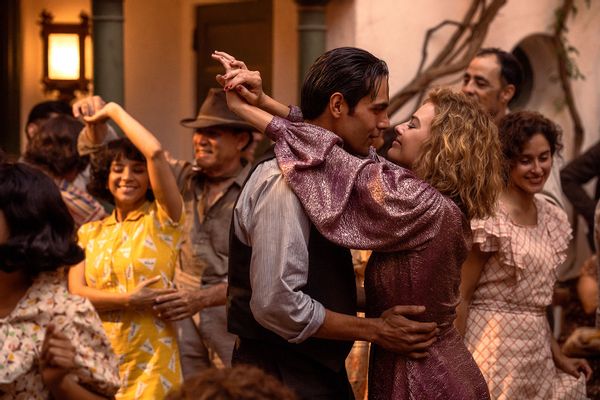 "Bablyon" lumbers along until there is a fantastic scene between Elinor and Jack where they talk honestly. The message here about the legacy of movie stars is wistful and affectionate enough that it engenders some good will. But then Chazelle pulls out all the stops with an irritating extended sequence involving a giddy James McKay (Tobey Maguire) who leads Manny and The Count (Rory Scovel) to a "sight" that has to be seen to be believed. The episode is overwrought in many ways, with Chazelle trying too hard to shock and create tension and unease. But his efforts fail, because even if the "sight" is disturbing, it, along with one character's death or another's downfall, feel predictable.

There is nothing very surprising in "Babylon." Chazelle just lets his flop sweat fly as he spins plates and pays homage to various classic films and one film in particular, but it feels strained. His head-spinning coda is meant to emphasize the magic of the film audiences have just seen (read: endured), and movies in general, but it comes off as misguided as it is well-intentioned.

The actors certainly try, with Robbie working overtime to make Nellie more outrageous than lovable. Manny's attraction to her should be palpable, but Robbie and Calva's chemistry peaks too early. An inane sequence where she tries to wrestle a snake — because her dad (Eric Roberts) couldn't — may be her lowest point, and that is saying something given her crude misbehavior at a snooty party. Brad Pitt plays his typical laconic self, and there are sight gags that seem to have been recycled from his role in "The Lost City" earlier this year. Pitt looks movie star handsome here, which helps, but his character's loss of passion may mirror how the star felt about the script, which saddles him with despair for at least its last hour.

Manny has the biggest character arc, and the appealing Calva, who sounds like Javier Bardem and looks like a taller Gael Garcia Bernal, does his best, but while Manny can fix many things, Calva cannot fix this hot mess. The actor never gets to flesh out his character, who briefly talks about coming to America from Mexico when he was 12, and later passes himself off as Spaniard to codeswitch at a critical moment. It is interesting to see him climb the ranks and not suffer the extent of the racism Fay and Sidney do, but more could have been done with character, who largely remains an enigma. It hard to get invested in his issues of integrity.

In support, Li Jun Li and Jovan Adepo, both get moments where they are magnetic, and Jean Smart steals the film whenever she is on screen. Even Eric Roberts gets to shine in his few scenes as Nellie's no-good father. Alas, Toby Maguire's deliberately off-putting appearance is meant to be uncomfortable, and his scenes are mostly exasperating.

"Babylon" is also exasperating. It tries to do too much but ends up doing not saying very little. Less would have been more.