Have hope: The coming year brings the return of many great shows. Here are the ones we're highly anticipating 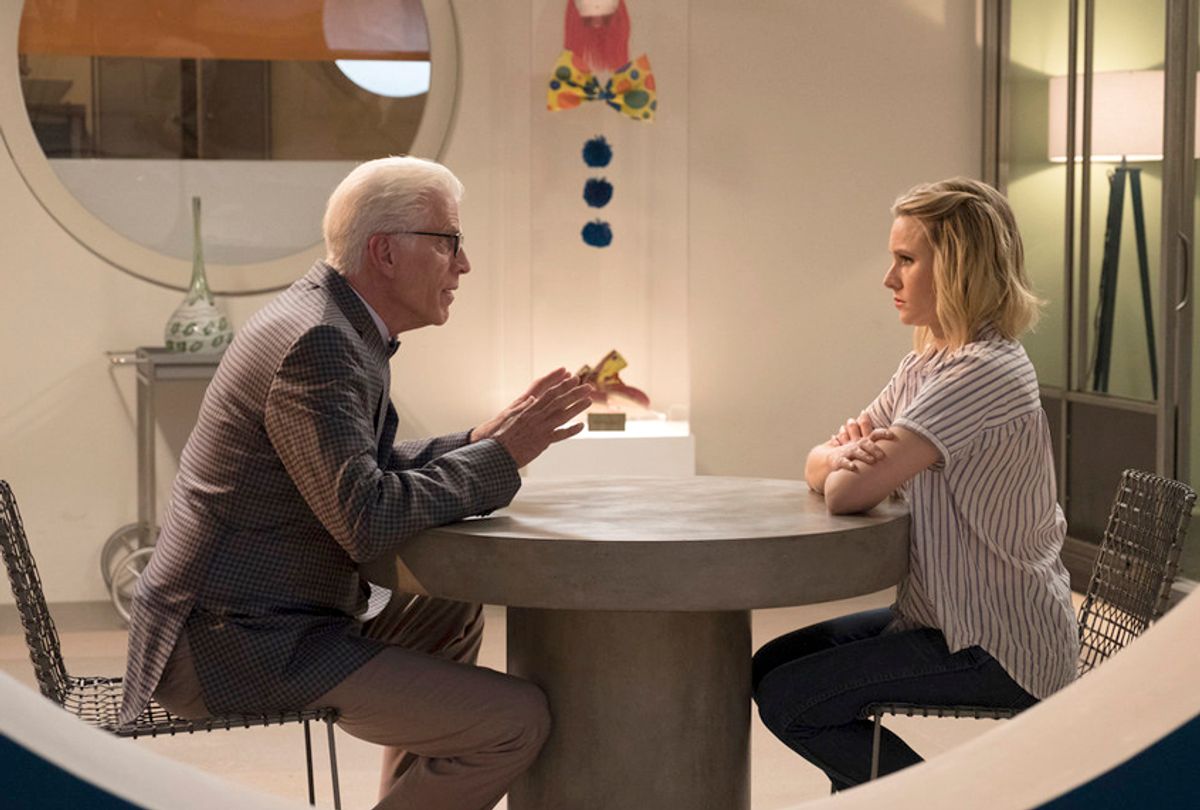 Ted Danson and Kristen in "The Good Place" (NBC)
--

Coming down from the holiday haze can be bummer. No getting around that. Fortunately, a number of top-shelf TV series make their return over the coming weeks and months, including one that’s been off the air for nearly 21 years. Plenty of new series are on their way too, but for now we compiled this list of premiere schedule information of 13 returning favorites. Hopefully having them back can help to ease our collective glide down to the usual state of midwinter (ab)normalcy.

The initial installments of Chris Carter’s resurrected genre classic received mixed reviews and ended in a bewildering, disappointing place. Or so some say. True believers who still TrustNo1, especially grumpy critics, will be delighted to see Mulder and Scully back “out there” yet again. 8 p.m. Wednesday, Jan. 3 on Fox.

The funniest, brainiest and most ethically sound comedy on television has been missed all these long holiday weeks, and its return during the post-holiday doldrums should be just the thing to cut through our midwinter blues. Head toward the light, people! 8:30 p.m. Thursday, Jan. 4 on NBC.

Although it has taken knocks for resembling the tone of “Battlestar Galactica” as opposed to classic “Trek,” “Discovery” hasn’t aired a new episode since the second week of November, and nerds like yours truly have felt its absence. Better to have around, nicks and all, then be without it altogether. 5:30 p.m. Sunday, Jan. 7 on CBS All Access.

One of those TV pleasures for which there should be no guilt, the TV version of Lev Grossman’s novels is a winning blend of wonder and snark. And it’s a light urban fantasy series about young adults navigating a world of magic that has been able to escape the long shadow cast by a certain British boy wizard to establish its own identity. 9 p.m Wednesday, Jan. 10 on Syfy.

This lofty, multi-faceted anthology series explores the intoxicating nature of the private lives and concerns of city dwellers from very different walks of life, united only in their adoration for cannabis and their reliance on the delivery man, known only as The Guy, who brings their high right to their doorstep. 11 p.m. Friday, Jan. 19 on HBO.

At this point we’ve established that we’re leaving behind an abnormally, alarmingly substandard year. This series regularly reminds us that we’ve been through such abnormal and alarming times before and come out in one piece on the other side. Receiving that reminder from a series of wasted storytellers make the lesson go down a lot easier. 10 p.m. Tuesday, Jan. 23 on Comedy Central.

Some truly talented runners up from previous seasons grace the third season’s “All Stars” line-up, and unlike last time, this round doesn’t have any clear favorites to win. Except, maybe, Shangela, this franchise’s equivalent of a post-nuclear cockroach. That’s a compliment, honey – no matter what they do to her, she just keeps on coming back. 8 p.m. Thursday, Jan. 25 on VH1.

This round of new episodes premieres at the same time as the return of “The Walking Dead” on AMC. In previous years, one might call Starz’s decision to compete foolish. But where “The Walking Dead” degenerated into a joyless slaughterhouse years ago, Bruce Campbell and the gang do everything in their power to make sure Ash’s continued battles against the Dead-ites are a hilarious, gory slaughterhouse. That may not make a horror fan’s choice completely clear, but as to the question of which one’s groovier, there’s no contest: our love belongs to the king. 9 p.m. Sunday, Feb. 25 on Starz.

One of TV’s unsung gems about lasting partnership and loyalty, the new season is an adaptation of Joe Lansdale’s novel “The Two-Bear Mambo” and features Louis Gossett Jr., Corbin Bernsen and Andrew Dice Clay. We’ll forgive the producers on that last one. 10 p.m. Wednesday, March 7 on Sundance TV.

Forgive a person for anticipating the return of Ms. Jones with a sense of cautious enthusiasm. The first season was incredible, one of the best Marvel series to run on Netflix so far. But the second season of its “Defenders” cohort, “Daredevil,” was scatterbrained and suffered from a slack energy at times; it had too much going on and didn’t go enough with it. That doesn’t necessarily mean the writers of this action series will fall into the same trap, however, so . . . it’s OK to have hope. 12:01 a.m. PT Thursday, March 8 on Netflix.

The successful return of “Will & Grace” proves that it’s possible for an old show to return with a few new tricks — but mostly a lot of old ones we love — and reap the rewards of nostalgic affection. This revival has even higher stakes, given the original’s legendary status in TV history’s pantheon. Its take on working class issues, however, could prove to be an apt fit with our times. And we’re curious to see whether the writers plausibly manage to raise Dan Conner (John Goodman) from the grave. 8 p.m. Tuesday, March 27 on ABC.

Already worth anticipating, given the excellence of season 1, the second season takes the plot off-book, which could free the writers to explore dangerous, heady territory, or . . . well, you saw the seventh season of “Game of Thrones,” yes? Here’s hoping it’s better than that. Returning sometime in April on Hulu.

Donald Glover’s provocative, boundary-blurring comedy has been off the air for far too long, but for a very good reason: The “Star Wars” universe tapped him to play a young Lando Calrissian in the upcoming standalone movie “Solo.” Now that he’s re-entered our atmosphere, we can’t wait to reconnect with Earn, Van, Alfred and Darius to find out how life’s treated them since the first season finale. Returning sometime in 2018 on FX.