From David Bossie to Jared Kushner: Who could replace John Kelly as White House chief of staff 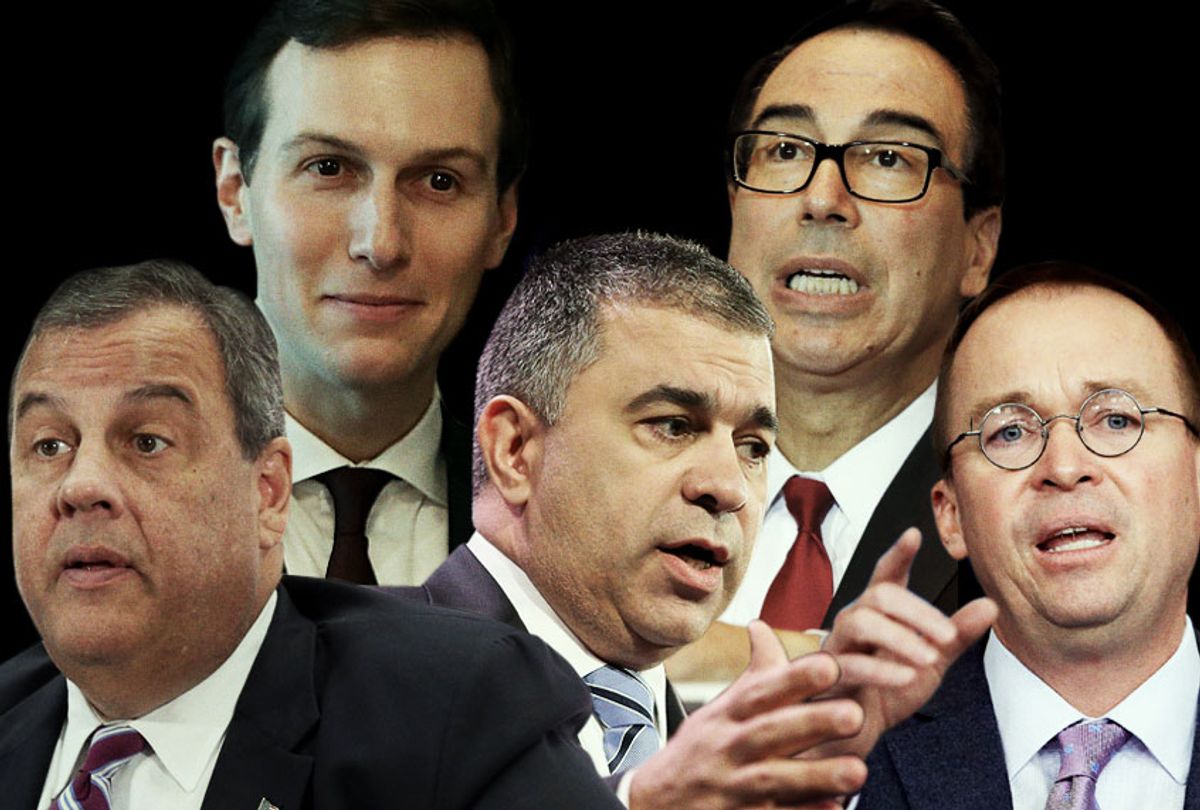 John Kelly, President Donald Trump's chief of staff, is expected to exit the White House at the end of the year – a mere 16 months after he first started the coveted job at 1600 Pennsylvania Ave.

Kelly, the retired four-star Marine general who replaced Trump's first chief of staff, the former RNC Chairman Reince Priebus, was said to have been tapped to use his military experience to bring a sense of order to a White House mired by staff infighting and power struggles. That never occurred, and "many of the storms in which Kelly became embroiled were by his own making," according to CNN.

As Kelly prepares to leave the West Wing, the president must choose his replacement. Here are five people that Trump is reportedly considering for the gig.

The former New Jersey governor, who was once a rising star in the Republican Party until he fizzled out on the national stage, was spotted meeting with Trump about the chief of staff role at 1600 Pennsylvania Ave. on Thursday, CNN reports.

Christie ran a failed presidential campaign in 2016 and endorsed Trump three weeks after throwing in the towel on his Oval Office ambitions. He was reportedly even offered the vice presidential nomination before Trump rescinded his offer because of Christie's "Bridgegate troubles," in turn choosing Mike Pence. Christie was then demoted to co-vice chairman and replaced by Mike Pence as head of Trump's transition team. He was later pushed out, because "Trump got annoyed" that Christie tried to hog his spotlight. To add insult to injury, Trump hired a former Christie aide, who federal prosecutors suggested helped create the culture that led to the Bridgegate scandal, to lead the White House's political operation. Christie previously blamed his wife for Trump's decision not to hire him. He is reportedly loathed by Trump's trusted son-in-law and senior White House adviser Jared Kushner, whose father was sent to prison by Christie when he was a U.S. Attorney in 2004.

Christie was previously shunned by Bruce Springsteen and escorted by state police when he tried to circumvent a TSA checkpoint at Newark Liberty International Airport. He left office as the most unpopular governor in New Jersey's history with an approval rating of just 15 percent. Despite a tumultuous relationship, Christie reportedly found his way back to Trump's heart and could revive his political career as the next White House chief of staff.

On Friday, Christie took himself out of the running. In a statement, he said, "It's an honor to have the president consider me as he looks to choose a new White House chief of staff. However, I've told the president that now is not the time for me or my family to undertake this assignment. As a result, I have asked him to no longer keep me in any of his considerations for this post."

The husband of the president's eldest daughter, Ivanka, and a White House staffer met with Trump on Wednesday about the job, HuffPost reports. Kushner and the first daughter, notably known as "Javanka," are known to wield significant clout in the West Wing by having the president's ear like literally no one else. They recently came under fire for reportedly pushing "very hard" for a federal program that could benefit them financially. The couple has also come under intense scrutiny from both inside and outside the White House for allegedly upholding the institution of nepotism, as well as concerns about their business dealings.

Since joining the White House, Kushner has had to make repeated changes to his financial disclosure forms, because he failed to reveal all of his financial ties, especially with foreign countries. His repeated refusal to officially log all of his foreign contacts has kept him from obtaining a permanent security clearance and even led to his interim security clearance being downgraded from top-secret to the secret level.

Most recently, Kushner faced criticism for allegedly "covering up" for the crown prince of Saudi Arabia, Mohammed bin Salman, who U.S. intelligence agencies concluded directed the assassination of U.S. resident and journalist Jamal Khashoggi after luring him to the Saudi Consulate in Istanbul in October.

The Office of Management and Budget director is also a contender for the chief of staff position. Mulvaney has experience working on Capitol Hill, where he represented South Carolina in Congress from 2011 to 2017. He espouses hardline conservative positions and is a founding member of the right-wing House Freedom Caucus. He was confirmed in February 2017 by the Senate in a 51-49 vote. Every Democrat in the Senate voted against confirming Mulvaney, as well as the late Sen. John McCain (R-Ariz.), who did not like his position on cutting the defense budget.

Mulvaney is reportedly not interested in the job and would rather transition to Commerce or Treasury secretary if needed, according to the Associated Press.

Another reported finalist for the position includes Secretary of the Treasury Steven Mnuchin. The former Goldman Sachs banker has come under fire for reportedly spending more than $1 million on air travel on government planes and after he and his wife Louise Linton posed with sheets of cash that featured Mnuchin's signature as Treasury Secretary.

Before working for Trump, Mnuchin also worked as a movie financier, helping fund some of Hollywood's biggest blockbusters like "Avatar" and "The Devil Wears Prada." He has dozens of producer credits on IMDB and is listed as an executive producer on major films, including "American Sniper," "The Lego Movie" and "Suicide Squad."

The right-wing operative formerly served as Trump's former deputy campaign manager during the 2016 presidential election before landing a gig at Fox News as a contributor in February 2017. He was suspended from the network earlier this year for making a racist remark and has a documented history of employing dirty tricks and smears. Bossie, 53, is the president of the archconservative nonprofit group, Citizens United.