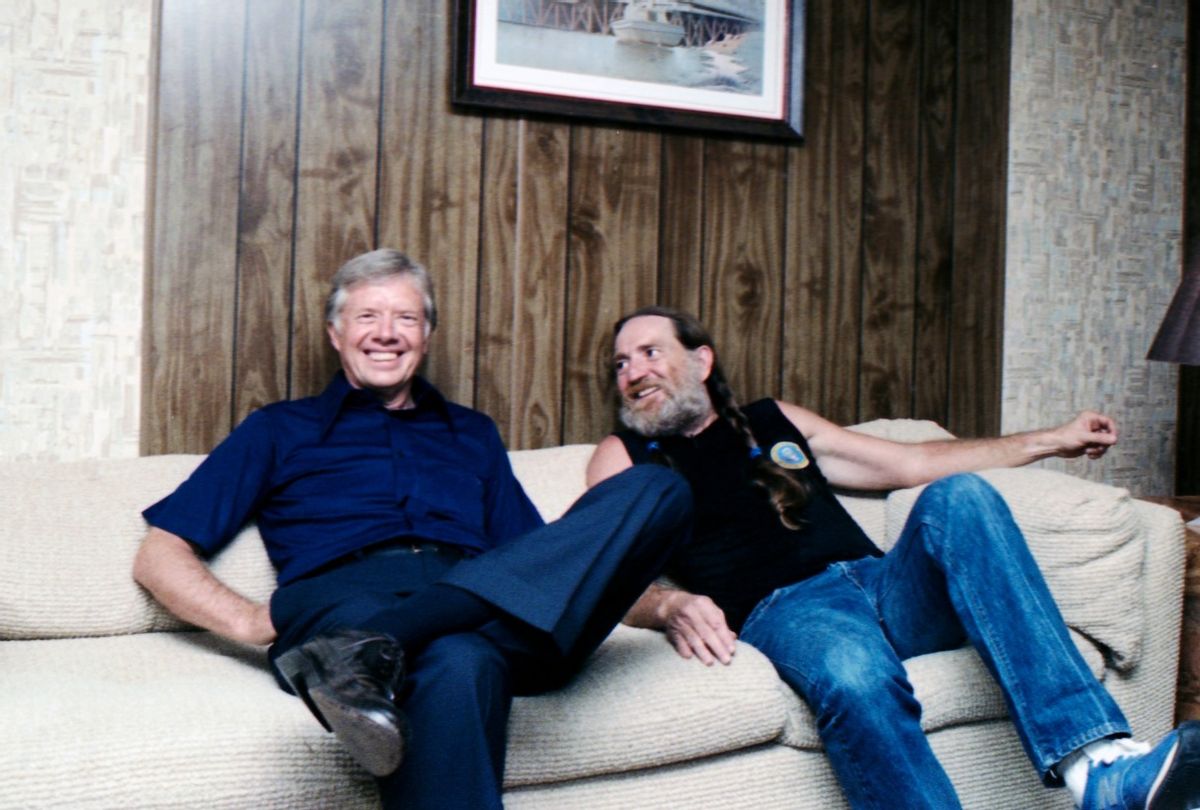 "Jimmy Carter: Rock and Roll President" is director Mary Wharton's delightful documentary that pays tribute to the 39th (and most peaceful) American president. The film opens in Plains, Georgia, 2018, with Carter smiling and listening to Bob Dylan's "Mr. Tambourine Man." The film shows how Dylan, along with Carter's friends Greg Allman, Willie Nelson, Johnny Cash, Jimmy Buffett, and Charlie Daniels were instrumental in helping him get elected. It was not just that concerts that doubled as fundraisers could help buy political advertising, Carter appealed to younger voters who were tired of Nixon and Ford. Hell, even Hunter S. Thompson was impressed enough to follow and endorse Carter.

This may not be a groundbreaking concept, but Wharton's film explores how music reflects society, and how Carter's efforts as a civil rights leader made him an appealing candidate who used soft power — music — to win hearts and minds.

Wharton's film is chock-full of anecdotes by Carter and his famous musical friends. In addition to Dylan, Allman, Buffett and Nelson, interviewees include Nile Rodgers, Rosanne Cash, Garth Brooks and Tricia Yearwood, and, inexplicably, Bono. But equally enjoyable are the concert scenes that range from Aretha Franklin performing "America the Beautiful" at Carter's inauguration to Loretta Lynn singing "Coal Miner's Daughter" for Deng Xiaoping, to Carter himself performing "Salt Peanuts" with Dizzy Gillespie.

"Jimmy Carter: Rock & Roll President" isn't just about music, but does touch on the Iran hostage situation, but also Carter's Peace Treaty with Anwar Sadat and Menachem Begin. The film also includes his post-Presidential life and his work with the Carter Center and for Habitat for Humanity.

Wharton along with producer Chris Farrell, spoke with Salon about this wonderful documentary and showing a different side of President Carter.

What sparked your interest in this particular aspect of Carter and his presidency?

Chris Farrell: When I was researching an Allman Brothers project, I was told to talk with folks at the Carter Center. I did, and I was told stories about how they helped Carter get in the White House. Then they told me stories about Carter and Bob Dylan. And Carter and Willie Nelson. It completely shifted my focus of what I wanted to do and the story I wanted to pursue. We were not looking to tell the traditional story of Jimmy Carter. We wanted to show his love of music and how he used it. We thought by doing it this way, the messages we wanted to get across would resonate.

Mary Wharton: My background is in making documentaries about music. If Chris said, "I wanted to make a documentary about Jimmy Carter," I'd say "That's cool. Why tell me about that?" I don't think of myself as a presidential documentarian. But when he came to me about the idea of Jimmy Carter and his relationship with music, I thought that was an interesting opportunity to utilize this aspect of Carter's life that is not well known, and show a different side of him. This idea that he's a lot hipper than most people ever gave him credit for was so appealing to both of us. You think of his cardigan sweaters and having this persona of being grandfatherly and, quite frankly, pretty square. And here he is the whole time hanging out with pot-smoking Willie Nelson and Bob Dylan and the Allman Brothers. It's a head-spinner! We hope that making people look twice with that fun aspect of his life would make them reconsider a lot of what they think about Jimmy Carter.

What can you say about securing the interview with Carter? Barbara Kopple told me recently that he was not an easy interview to get!

Wharton: It was clear that Carter wanted to talk about this aspect of his life. When you see his smile in the interview, he was enjoying this conversation. When he talked about music, his face would light up. For a guy who has done thousands of interviews, we don't think anyone has asked him about this music taste and love of music.

Farrell: Even though they believed us, and signed the contract, he could be pretty stern and intimidating, but to Mary's point, within 3-5 minutes, he realized the line of questioning wasn't about the current political environment or the 1980 election. He realized what we were there for, and it was a joy.

Did you talk about specific performers with Carter, or have talk Carter and fill in the anecdotes?

Wharton: We had not done the research on a lot of the performance footage we used in the film when we did the first interview with Carter. Once it became clear we were moving forward we jumped at the first date they offered for an interview. We fished around to tell us his stories and then we went back to do the second interview, we had done the research and knew more specific things we wanted to ask him about. We got two one-hour interviews. They said, "You can use it however you want, but you literally have an hour." We were focused on judiciously spending time with him. We were given a special opportunity to have that much time with Carter, and we took it very seriously.

Do you think his associations with these musicians were appropriate? There is some discussion that it was a political risk to associate with pot smokers; they are radical. But at the same time, he leveraged his campaign on their backs. And you show in the film Jerry Brown followed suit, albeit less successfully.

Wharton: There were a number of articles and press and archival news pieces that I saw where people were suspicious at that time — whether it was a good or bad thing for a presidential candidate to associate with pop stars and what effect this might have on our politics in America. At the time, America wasn't quite as celebrity-obsessed as we are now. There weren't people who were famous just for being famous, influencers, or what have you. Other politicians have asked musicians to perform at their rallies. Bernie Sanders was doing that before he dropped out of the race. But there is an organic relationship Jimmy Carter has with these musicians that doesn't feel forced.

Farrell: Nixon tried to associate himself with Elvis but people didn't see it as authentic. It's marketing. This was genuine. Carter invited Dylan and Greg Allman to the Governor's mansion. He didn't ask them there to campaign for him for president. These were relationships he genuinely had and built, and it was fortuitous that he could use them. It was less celebrity-focused; it was his genuine love of music and how it connects with the people.

On that same note, what observations do you have about music and politics and how they go hand in hand? There is a line in the film about music reflecting society.

Wharton: I think that any good politician is going to understand that music is played at football games and pep rallies and political events to excite people and get them riled up. But I think that there's a fine line between using music as a soundtrack and actually having a real endorsement from a musician. You see where musicians object when certain politicians use their music because they object to the politics.

Farrell: Carter cuts through all that. He cuts through politics. He liked gospel, country, classical, rock, R&B and jazz. It wasn't that it was 1976 and this is the mood of the country. He tapped into things of the times. It was about the music.

Wharton: I think he showed that he had a really deep understanding of the meaning behind the music that he was signaling to people. When he quotes Dylan at 1976 Nation Convention, it was a 7-year-old song; it wasn't a song of the moment. There was a huge divide between the establishment and adult world of politicians, and the youth culture who knew Dylan and the Allman Brothers. That he quotes Dylan lyrics shows he is not grasping at cool and hip but he's showing he understands the meaning behind Dylan and how it resonates to him in that moment. This is coming out of Watergate and he's talking that he's never had more hope in America when many people felt disillusioned. He used Dylan's lyrics that he sees American is busy being born, not busy dying.

Farrell: Even the jazz on the White House lawn — he brought those musicians there and honored them. It was about the messaging. The powerful thing is the President acknowledges that in an art form, and he used that to convey the racism — that Black and white musicians couldn't play together historically.

What about securing the musicians, which is a long list of greats? How did you get them to appear and did you review what they would discuss?

Wharton: To be honest, a lot of it was because of Jimmy Carter. Carter has a relationship with a number of these artists, so it was, "You're doing something. Where do you need me to show up?"

You incorporate interviews, archival footage and performance clips for the film. Can you describe how you assembled the documentary and finding footage of Carter at an Allman Brother's show, or performing "Salt Peanuts"?

Wharton: It was really quite Herculean task, the research and archival materials. Everything he did was documented for years by multiple outlets. It was a lot to sift through. We have a little road map because we knew about certain interviews we'd done, like Jimmy Buffett playing at a camp rally in Portland. We'd look into that, and while we didn't know the exact date, we could figure it was sometime around the Oregon primary. And then go to the ABC news archive. We dug around in databases and found stuff that had never been labeled properly or never been transferred. His "Salt Peanuts" performance aired on TV, but those tapes were sitting unseen for 40 years. We wound up with hundreds of hours of footage and thousands of photos.

I appreciate that you touch on Carter's civil rights and human rights efforts. What did you learn about his work in making the doc?

Wharton: One thing that surprised me was how strong and true his moral compass is. I guess I always thought he was a good man, but I didn't realize to what length he was willing to go to remain true to his moral compass. Some of the stories that we learned making this film were in regard to the Iranian hostage crisis. I didn't know that he knew to get U.S. public on side was send in bombers and bomb Iran. That's what his political advisers said he needed to do to win the election, and he refused because the hostages would die if he had done that. At risk to his own political fortune, he did the right thing. He did the same standing by Allman who was arrested on cocaine charges. It was said to be political suicide to associate with someone on trial for drug charges. He saw his friend was going through a difficult time and needed help, and he was there for him.

That was surprising, because you don't meet people like that very often.

Farrell: The strength. This perception that came out of Iran hostage crisis, that people think he's a nice sweet guy, but he's a strong-willed person. He has the strength of conviction and putting that into action is pretty incredible.

"Jimmy Carter: Rock & Roll President" is available in theaters and virtual cinemas on Wednesday, Sept. 9 and on home entertainment release on Oct. 9.