This Japanese action-thriller is brutal. It also asks us to think about how we want to live, not just survive 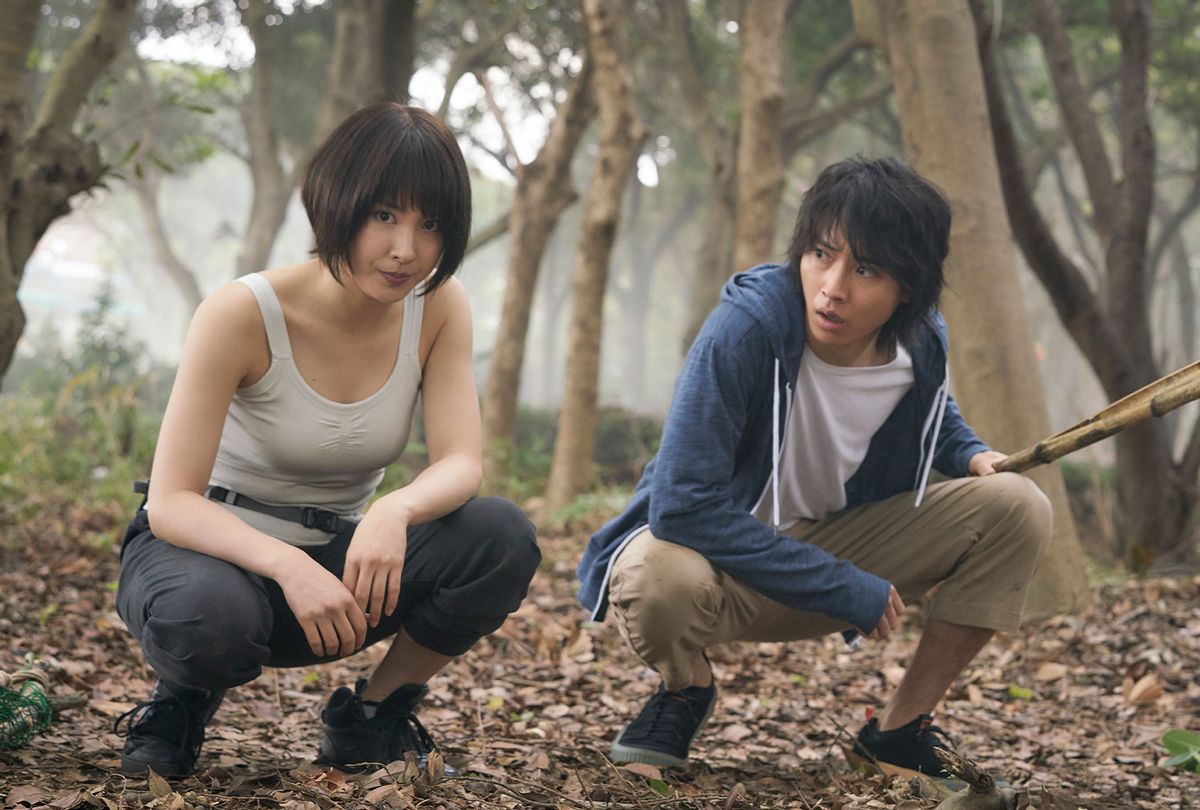 Dystopia became our reality in 2020, and it feels nothing like so many movies and TV shows predicted. Zombies haven't overrun our cities. Roving marauders have been in short supply, relatively speaking. An airborne plague is the source of our woes, but the atmosphere is otherwise breathable. Mostly.

Those fortunate enough to ride this out at home watch the nation come apart on TV screens, marveling at how slowly time moves when everything cracks. This is part of the reason depictions of the COVID age left us wanting. Shows designed to reflect our new Zoom existence – "Connecting," "Love in the Time of Corona," "Social Distance" – arrived, and nobody cared.

Movies like "Outbreak" and "World War Z" surged in popularity at the beginning of the pandemic, but more than half a year later and with no end in sight to quarantine living, Amazon failed to successful tap into our anxiety with "Utopia, " a show set in the midst of pandemic. AMC's long-running post-apocalypse soap "The Walking Dead" returned to close out its season and netted its lowest ratings ever.

And a week ago, CBS All Access debuted its highly anticipated, star-studded updated version of "The Stand" to a resounding "meh."

Evidently we'd rather tune out reminders of the ways the world as we know it is falling down. Then again, maybe the issue is with how these stories are filtering our current reality. The "distanced" series failed to consider the audience's Zoom fatigue into the equation. "Utopia" is too messy and convoluted. Whether "The Stand" is a hit or miss depends heavily on the depth of a viewer's love for all or most things Stephen King, but its central conflict between light and darkness plays out onscreen as banal.

Thus I was utterly surprised to be drawn in by "Alice in Borderland," Netflix's recently released eight-episode suspense thriller directed by Shinsuke Sato and based on a manga series. This description automatically eliminates a vast swath of America from its potential viewership. For some reason we'd rather not deal with subtitles unless it's attached to a show featuring Klingons, Jawas, dragons, barbarians or Danish detectives.

To make direct comparison with "The Stand," "Alice in Borderland" handles the mechanics of introducing its characters more effectively and it doesn't throw off the audience by leaning heavily on flashbacks. What glimpses it shows of its characters' pasts are solely presented to contextualize their action in the present. Knowing the type of people they were before they tumbled into its dystopia is important, but unlike "The Stand," the "before" profiles aren't extensive to the point of dragging on the story's progress.

On the other hand, "The Stand" is a gentler story, which says plenty about the vicious nature of "Alice in Borderland" and may further narrow its appeal.

Unless, I should say, you're a fan of the 2000 cinematic cult classic "Battle Royale," the story of a busload of schoolkids who are knocked out and wake up on an island, at which point they are informed that by law they must now hunt and kill each other until only one of them remains. This Netflix show hints at what a series adaptation of that film could look like, albeit one influenced by "Ready Player One" and  sprinkles of "Lost" thrown in for good measure.

"Alice in Borderland" doesn't flow like some simple pop culture mash-up or behave expressly as an eight-hour, end of days action blast. The slaughter is over the top, yes. Lots of rooms and buildings explode, and the bullets fly freely. By no means is it a culture-shifting epic, either; the script makes the same dumb missteps other shows like it trip over. (I was especially irritated by a scene threatening sexual violence against a main female character in order to highlight Arisu's impotence. Surely Sato watched "Game of Thrones," right?)

"Alice in Borderland" also endeavors to say something about the conditions that lead to a society losing its humanity, eventually asking its protagonists, and the audience by proxy, how they want to live once they've made it through whatever nightmares they have to survive.

That's the question posted to Arisu, this story's Alice (Kento Yamazaki) and an avid gamer who refuses to get a job or contribute to society in any meaningful way. "If only we could reset reality," Arisu sighs after his father kicks him out, which happens at the same time his friends Karube (Keita Machida) and Chota (Yuki Morinaga) suffer misfortunes of their own making. They meet up, blow off steam by goofing off and eventually dash into a train station toilet.

When they emerge, the city streets are inexplicably empty and without power. Not even their phones work. Then a digital sign suddenly appears on the side of a nearby skyscraper that directs them to their first game where they quickly learn by doing and barely surviving.

That Arisu doesn't believe in his own cleverness and worth is central to the first couple of episodes until circumstances force him to find some purpose in this violent world. To make it out of this world alive, he has to use his wits.

None of the rules in this upside-down hellscape are negotiable. Giving up is not an option, because refusal to participate means game over by way of laser execution.

Why would anyone living amid an era defined by a senseless death watch something like this? For the same reasons we flock to Suzanne Collins' "Hunger Games" series, "Logan's Run," "The Running Man" or any grim vision of humankind's tendency to be inhumane to other people. Watching under-resourced  and outgunned heroes overcome the odds is eternally satisfying – and as Arisu insists, every game has a solution.

In the same way "Battle Royale" was not expressly about cruel violence for diversion's sake, "Alice in Borderland" runs on a mystery hiding a critique of societal divisions enabled by technology and expanded as a result of other systemic failings.

Before "Borderland" Arisu spent most of his time in online battle royale games, the kind that foster thriving virtual economies and attract millions of player who use the space to socialize. (Think "Fortnite.")  You can spend the majority of your waking life in these virtual spaces without physically engaging with real people and the world around you. Most gamers don't do that, but enough do to make it a culturewide problem.

Such games became massively popular in recent years and not for nothing.  On Dec. 10, the same day "Alice in Borderland" debuted on Netflix, the Los Angeles Review of Books published an essay by writer Brendan Mackie that spells out why such games appeal to hundreds of millions of players, the majority of whom are under 25 years old.

In his estimation, they are the result of the broken promise of supposed neoliberal meritocracy. A good education no longer guarantees that a person will secure an income that helps build wealth, let alone pay the bills. Hard work does not necessarily equal economic advancement either, not in a society whose decks are stacked to favor the one percent. Hence Mackie's thesis:

"Battle royale games are the stories kids tell themselves about this culture of cutthroat competition. Just like the real world, in battle royale games only the one percent win. But these games are a fantasy in which this unequal outcome is produced transparently and equitably, albeit violently, a fairy tale about how the meritocracy should really work. Though it is tough, brutal, and difficult, it is fair; and though you have only a small chance of winning, the forces that oppress you are not unseen — they are clear and distinct. The decks are not stacked: everyone has the same health, the same armor, the same access to weapons and upgrades. You'll probably die. But you will live and die on your skills alone."

The writer goes on to explain that even this is an illusion. Games and rules are constantly expanding shifting, and there are always bigger and more powerful weapons to find and buy.

The "Alice in Borderland" plot draws upon this concept, in that there is no obvious pathway to the ultimate goal when Arisu, Karube and Chota first set out on their journey. Eventually we discover that players don't necessarily share a common goal. Most of whom they encounter are only focused on survival, and more than a few are dressed like salarymen, corporate drones slogging through dead-end careers.

Several also wonder aloud what's the point of surviving if there isn't anything else to live for beside earning free time in an empty, lawless city.

This is where this show endeavors to do something beyond plying the audience with spectacles of violence. A strain of pondering the difference between survival and living hums throughout the first eight episodes that clicks with conversations lots of people are having right now: Who do we want to be when this is all over? How will society change?

"Survive" and "survival" are said so frequently throughout "Alice in Borderland" that when someone mentions "living," it stands out, and that's probably intentional.

Arisu's chance meeting and eventual alliance with an athlete named Usagi (Tao Tsuchiya) firms up this notion; one of the first questions she asks of him is, "Do you want to live?" They're not inside of a life-or-death contest when she asks it; he's collapsed on the ground and professes he wants to die, and she has just picked up a copy of Henry David Thoreau's "Life in the Woods."

In a former life Usagi climbed mountains with her father, a famous pro who vanished after a scandal and is presumed dead. Through Usagi's refusal to let Arisu give up, she shows a determination to live within this world as she survives each trial. This may also increase her odds of "winning," whatever that means.

Watch closely and you may notice that she and other players who clear impossible games and navigate dangerous alliances share a drive to move forward as opposed to being motivated by the chance to return to their old lives.

Nearly every poor soul drawn into this terrible place is motivated to return to the original world, but only the ones who think like a game master as opposed to a powerless gamer have a chance. They win because they focus, determinedly, on the value of existing as opposed to surrendering to paralysis by fear which, in this scenario, is death. And the way this plays out here is dark, and wild, but also bizarrely thrilling.

"How will you live in this world that's full of despair?" asks someone who happens to be one of the smarter and more skilled players in the game. We could, and should, be asking that of ourselves in this reality and more to the point, be determined to solve that puzzle.

"Alice in Borderland" is currently streaming on Netflix.