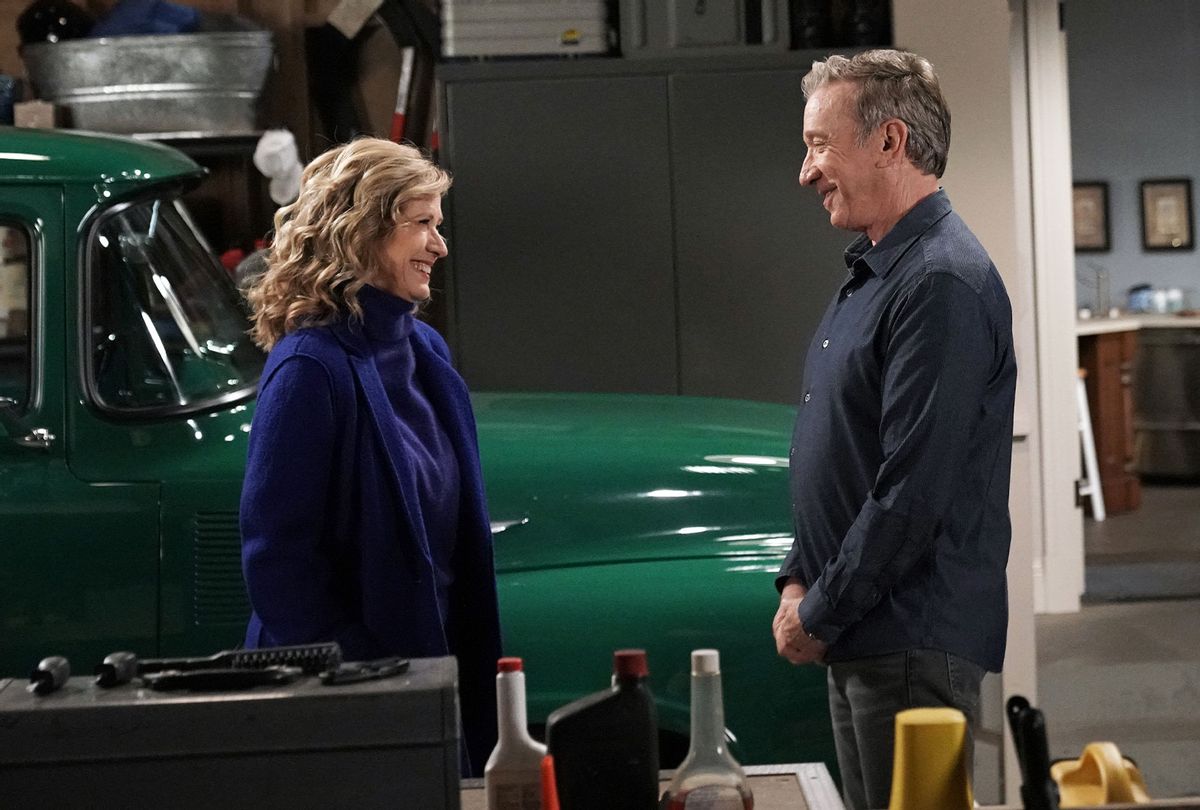 The final half hour of "Last Man Standing" finds the Baxter family mourning the theft of Mike Baxter's classic pickup. Mike, played by Tim Allen, spent 10 years restoring that truck, and he loved it so much that the family organizes a wake in its honor.  One by one family and friends share tributes that grow increasingly warmer and heartfelt, and the viewer understands it's not about the truck, or the Baxters. What we're really watching is the actors holding a wake for their departing show. The welled-up tears in their eyes, especially Allen's, are real.

Conflating Allen's persona with that of Mike Baxter has been the show's selling point and, depending on who you are, its drawback. Allen is one of Hollywood's most unabashed Trump supporters. Mike Baxter is conservative too, but Kevin Abbott, the final showrunner in a line of them spanning back to the show's creator Jack Burditt, has long insisted that he's a centrist.

Nevertheless, Mike's final entry in his confessional Outdoor Man vlog was anything but. "I've been thinking a lot about makers and takers, you know, because I had something very valuable taken from me: Somebody took my truck. Ten years of attention to detail, and then, poof, gone! It's an empty feeling," he – nominally, Mike – tells his followers.

From there Allen erases the pretense of separation between himself and his character. "I loved every moment of that show, er, truck. It was a classic, simpler, happier time. You know…the truck. And that's something that can't be stolen from me. What kind of punks steal other people's stuff? Make something yourself!"

"Last Man Standing" was never going to depart without circling back to its 2011 beginnings, but Allen's choice to sign off with these right-wing dog-whistles shows he's looking to infinity and beyond, and betting that this show's legacy will be to vindicate the version of reality he shares with his base.

In this interpretation, car theft isn't some random misfortune suffered by a wealthy man, but a symptom, somehow, of the undeserving reaping the fruit of honest people's labor. "Makers and takers" was one of former Republican congressman Paul Ryan's favorite phrases; it's also white grievance terminology dating back to the pre-Civil War era. It rolls off the tongue so easily, this shorthand for the myth that tax-funded government assistance programs that help the needy also make them more indolent.

But shucks, maybe I'm seeing something that isn't really there. Mike is only talking about his truck, and Allen is talking about his show; and in another interpretation the "taker" is 20th Television, now owned by Walt Disney, which also owns ABC, where "Last Man Standing" ran for six seasons.

I want to make it abundantly clear that its conservative skew doesn't make it a terrible sitcom. There's room on TV for all types of viewpoints, and certainly liberal creatives outnumber conservatives in Hollywood. Remove Allen from the mix, and "Last Man Standing" would be a harmless, decent family show demonstrating the ways that folks can hold different points of view, even quarrel, but still demonstrate loving kindness toward one another. This is how its fans would describe it and will remember it.

What's concerning is Allen's choosing to top off his show's overall veneer of homespun sweetness with such direct shout-outs to white male resentment, expecting that somehow we are supposed to laugh it off.  It's not as if these concepts aren't normal family sitcom fare, but they're presented like harmless quips when they're not. If anything, they make the show's centrism look disingenuous.

Over the years, the show has been mischaracterized as a working class comedy, which it never was. That was abundantly clear when "Roseanne" returned to TV in 2018 and depicted the Conners struggling with money and health problems in ways the Baxters, an upper-middle class family living in a spacious Denver home, never did.

But where that show's storylines attempted with varying degrees of success to wrestle with Trump-era politics related to such topics as race, immigration and gender identity, "Last Man Standing" generally shoots for the middle.

Mike, for all of his he-man grumbling, is balanced by his wife Vanessa (Nancy Travis), a geologist who voiced support for Hillary Clinton, and his daughters Eve (Kaitlyn Dever), Kristin (Amanda Fuller) and Mandy (Molly McCook). Eve, his youngest, aligns the most closely with Mike while Kris and Mandy skew liberal.

Conflicts arise all the time, as they do in families, but their arguments stem from culture war talking points as opposed to matters of impactful policy. The ninth and final season avoids the most divisive issues of the day entirely, in fact, by jumping the story a few years ahead to a happier time when there's no need to get into pandemic-era tensions about mask-wearing and lockdowns.

This is in keeping with the show's reflection of America as your Fox News–loving family member perceives it: a country where everyone is equal, where hard work and ingenuity are always rewarded with a good and easy life, and where racial and social strife are manufactured by and happening to other people.

Don't get me wrong, some measure of escapism has long been the essence of the network sitcom's duty. Broadcast comedies are designed to comfort and entertain, and whatever conflicts humming behind the smiles and the laugh tracks are usually solvable in around 22 minutes, and almost always bearable over the long term. Hence when a show like "Black-ish" or "The Conners" gently and intelligently guides the audience through topics like police brutality or transgender visibility, it is a real accomplishment.

But this show's version of such field trips takes the form of conversations right-leaning families may have that don't typically turn up on broadcast TV.  Some of them are actually quite uplifting and hopeful, such as the conversations Mandy's husband Kyle (Christoph Sanders) has with Mike's business partner Ed (Hector Elizondo), a staunch atheist, about his studies at seminary college.

Neither man converts the other, but the pair sustains a mutually affectionate understanding that comes across as totally genuine. Threads like these are quite typical in this series, where Mike or someone else airs their spin on a conversation starter and everyone travels through the topic in their own way until they reach middle ground.

In the wider and real world, middle ground might as well be the lost empire of Atlantis. Maybe it was accessible at some point, but not anymore. We're wrestling with a bevy of ills and in some respects TV is responding to that.

"Last Man Standing" premiered on ABC as part of a reactionary slate of shows catering to the false fear that the nation was suffering from a widespread affliction of low testosterone, a so-called "man-cession."

It was flanked by "Man Up!" and briefly joined by a disaster called "Work It," in which two men dressed as women thinking that they'd advance their careers in doing so – something like "Bosom Buddies," but with an eighth of the charm and no Tom Hanks to speak of.

"Man Up!" failed as well, but "Last Man Standing" survived to see nine seasons – six on ABC, until the network cancelled it despite it being the second highest-rated comedy on the network. Fans accused ABC of penalizing the show for Allen's Trump support, although executives maintained, and a number of journalists have researched and affirmed, that its dismissal had more to do with financial and demographic reasons. (Translation: the show wasn't produced by ABC, it was getting more expensive; and its audience is older.)

On Fox, its viewership held steady during the 2016-2017 season, when Trump first entered office, only to decline in its eighth. Giving "Last Man Standing" enough notice to give fans a farewell, then, is a courtesy not every show gets, even those that earn it. How this translates to Allen's show being "stolen" is baffling…unless it's not about the show, or the truck, but partisan politics.

Looking back from that perspective, then, the toothless punchlines take on another dimension. Lots of people have examined the sharpening of partisanship in parallel with the coarsening of culture, a reaction to the "wokeness" that in previous eras was called political correctness. That term was as terrible as "woke" is when it drools out of Tucker Carlson's mouth, but both are born of noble intentions that have been co-opted and twisted.

Where liberal comedians skewered political correctness as a release valve – correctly or wrongly – right-wing figures turned it into a process of attack and retreat. Cable news pundits, radio jocks, politicians and their followers honed a practice of lobbing vicious insults at their political adversaries and then, when called on crossing whatever imaginary line their might have been, throwing up their hands with an insistence that it's all just jokes. Can't you liberal snowflakes take a joke?

Allen wasn't so sinister in his stand up, particularly after he discovered the magic formula of speaking to conservatives with a wink and a goofy smile. This is why the Baxters never had to be an overtly MAGA-tribe, and Mike didn't have to prevail in his arguments or even follow through on cracks about Obamacare or gun control with cogent arguments. Acknowledging that a segment of the show's audience – the dominant portion – thinks like Mike and discusses such topics with their families is enough.

Mike's truck was stolen, no doubt about that. Allen's show was not, though. A more realistic interpretation is that TV chose to drop him off and keep on rolling. Not just him or "Last Man Standing," either. Sitcoms in general are entering a broadcast dry spell, indicated by the fall schedules NBC, ABC, CBS and Fox revealed this week.

Indeed, Fox's fall schedule is utterly devoid of live-action comedy half-hours, saving its new sitcoms "Pivoting" (about three women) and "Welcome to Flatch" (about small-town life) for midseason. ABC, the first home of "Last Man Standing," is corralling its sitcoms to one night, and all of them feature families that are working class or solidly middle class. Its remake of "The Wonder Years," the quintessential show about a "classic, simpler, happier time," shows how such an era was lived from a Black family's perspective.

NBC is also saving its comedies for midseason; no half-hours grace its fall schedule as it currently stands, although its streaming service Peacock has a few outstanding new ones. The exception is CBS, but its comedy block has been consistently successful for years. Many of the ones returning to its schedule are produced by Chuck Lorre, the king of imperfectly empathetic comedy that means well.

Viewing this as a sign of social progress is optimistic, but it's not entirely realistic. Television may influence changes of heart, and that's crucial. But it's tough to look at what's happening to our democracy and society, and not be disheartened.

At the pinnacle of Mike's speech, he shares the Thomas Moore–penned verse Reagan uttered when he lost the Republican nomination in 1976: "'Though I am hurt, I am not slain. I lay me down to bleed awhile. Then I'll rise and fight again.'"

That series-ending diatribe, served with Allen's signature grin, reminds us that the show's alleged centrism was always camouflage. It was never about the truck with "Last Man Standing," but figuring out what was really lurking underneath the hood.

The series finale of "Last Man Standing" aired on Thursday, May 20. All episodes are streaming on Hulu.