Was this Barack Obama's finest hour? His 2011 roast of Donald Trump warned us what was coming

Ten years ago, Obama ridiculed Trump in front of the D.C. press corps. Trump has proved him right over and over 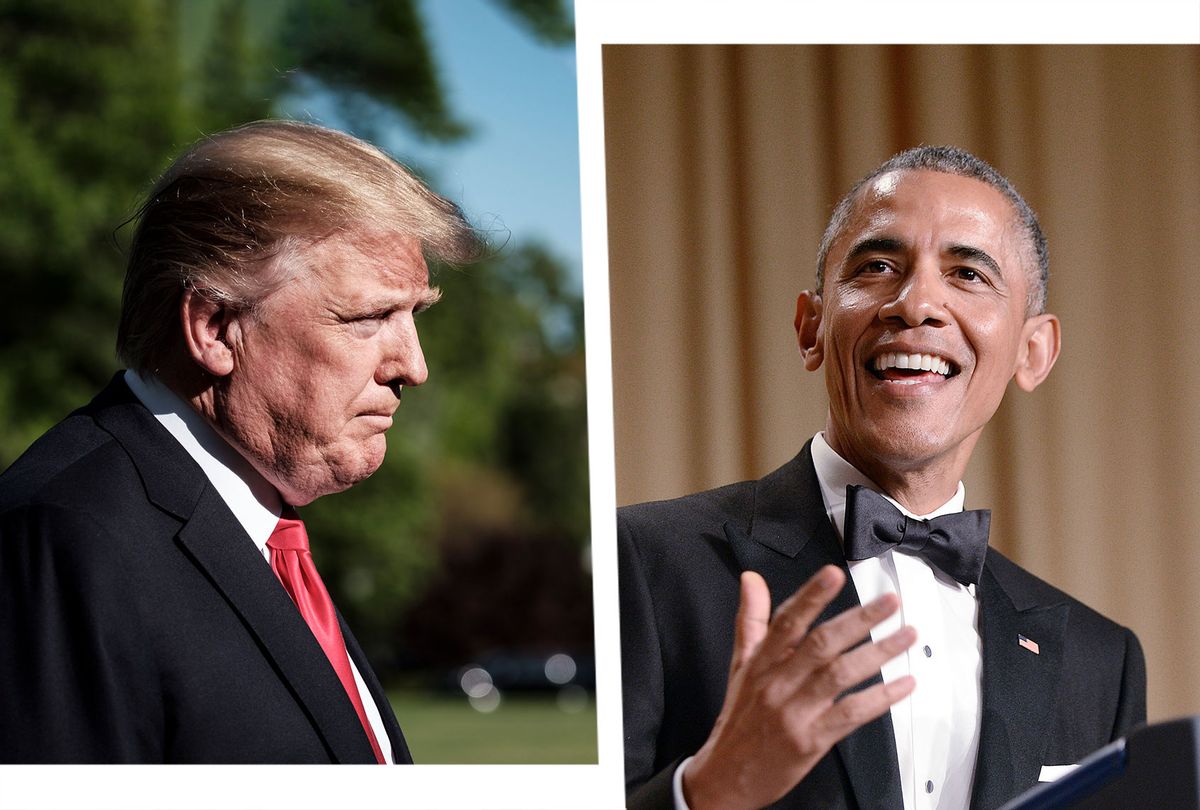 As legendary quarterback Tom Brady celebrated the Tampa Bay Buccaneers' 2021 Super Bowl victory with President Joe Biden, Brady cracked some jokes at the expense of a guy widely perceived as his friend — at least until now. Along with ridiculing one of Donald Trump's disparaging nicknames for Biden, Brady also mocked Trump's claims that he didn't really lose the 2020 election by quipping, "Not a lot of people think that we could have won. In fact, I think about 40% of the people still don't think we won."

It's not likely that Trump enjoyed being mocked as a sore loser by one of America's most famous sports winners. Brady, who had not visited the White House to celebrate a Super Bowl victory since 2005, may have very well put the final nail in his controversial relationship with Trump. He also reminded us of one of the most underrated speeches in American political history — the one delivered 10 years ago by Barack Obama at Trump's expense.

There were many moments in Obama's historic presidency that could be described as his "finest hour," but my personal favorite has always been Obama's roasting of Trump during the 2011 White House Correspondents' Dinner. Not just because Obama was funny (although he was), but because he wound up foreshadowing Trump's ensuing presidency with uncanny accuracy. The history surrounding that speech also imbues it with deeper meaning. And since Obama got in his digs at Trump while retaining his dignity and basic courtesy, his words come across not so much as insults but wry meditations about the sensibilities that could catapult the unlikeliest of all presidents into the White House.

Before Obama's speech, Trump had been working the media to promote the debunked conspiracy theory that America's first black president had not actually been born in the United States. Then a mere reality TV star, Trump was testing the waters for a 2012 presidential campaign and thought "birtherism" might be a winning issue. Not only did it none-too-subtly play on racist fears of a nonwhite president, it also sent the message that Obama was somehow disloyal to American interests.

This was the backdrop to April 30, 2011, when Obama and Trump wound up in the same room for a night of unflinching comedy. The other was that as Obama skewered Trump in front of the world, he was also secretly working on the raid that would achieve what Republicans President George W. Bush had not — killing al-Qaida leader and 9/11 mastermind Osama bin Laden.

Obama couldn't say that to the audience, of course, but he did throw his American bona fides in Trump's face. He opened the evening by displaying a copy of his birth certificate against a montage of hyper-America iconography, all as the Hulk Hogan theme song "Real American" played in the background. After that, he showed the opening scene from "The Lion King" while joking that it was his own birth video. (The most prominent conspiracy theory held that Obama had been born in Kenya, as his father unquestionably had been.) All of this took on the birther issue directly, deflating what Trump hoped might be his signature talking point for the 2012 election cycle.

But Obama didn't stop there. He moved on to ribbing other public figures at the event, but eventually returned to Trump with an even sharper wit. Pivoting with a joke about how Trump could work to discredit Mitt Romney, then the future 2012 Republican presidential nominee (and later, coincidentally, Trump's most high profile Republican critic), Obama landed a devastating blow by mocking the six-times-bankrupt businessman for embracing ludicrous conspiracy theories:

Now, I know that he's taken some flak lately, but no one is happier, no one is prouder to put this birth certificate matter to rest than the Donald. And that's because he can finally get back to focusing on the issues that matter — like, did we fake the moon landing? What really happened in Roswell? And where are Biggie and Tupac?

This section of the speech is the most prescient because it anticipated Trump's greatest shortcoming as president. Despite his numerous scandals and policy failures, Trump was reasonably well positioned to be re-elected in 2020 because he had inherited Obama's booming economy. His downfall, from a strategic standpoint, was in failing to listen to scientists about the COVID-19 pandemic and embracing pseudoscience instead. If he had heeded early warnings and embraced bold policies to help Americans get through this traumatic period, he could have saved many thousands of lives, done less damage to the economy intact and quite likely cruised to a second term. Instead he played down the pandemic, ignored basic science and even got sick himself. Americans suffered far more than they had to, turning his policy failure into an inevitable political one. And all that could have been avoided had he not been exactly the type of person Obama described in 2011 — a fool.

But all kidding aside, obviously, we all know about your credentials and breadth of experience.  For example — no, seriously, just recently, in an episode of "Celebrity Apprentice" — at the steakhouse, the men's cooking team did not impress the judges from Omaha Steaks. And there was a lot of blame to go around. But you, Mr. Trump, recognized that the real problem was a lack of leadership. And so ultimately, you didn't blame Lil' Jon or Meat Loaf. You fired Gary Busey. And these are the kind of decisions that would keep me up at night. Well handled, sir. Well handled.

There's a lot to unpack in those sentences. It is easy enough to see that in Obama's sarcastic praise for Trump's "credentials and breadth of experience," he was referring to the fact that Trump had no political or military experience. (He became the only president elected without at least one of the two.) Historical context, however, reminds us that Obama was himself accused of being too inexperienced to serve as president when he ran in 2008, even though he had served as an Illinois state senator and then a U.S. senator for nearly a dozen years. It seems almost certain that this double standard — which would become only more conspicuous after Trump was elected in 2016 — wasn't on Obama's mind.

Then there is Obama's quip about Trump's main job at the time, hosting the reality show "The Celebrity Apprentice." Once again, there was obvious commentary on Trump being held to a different standard than Obama, who was dismissively compared to a celebrity throughout his political career even though Trump literally was a celebrity, with no visible professional or political qualifications. There is also deeper meaning in the way Obama singled out Trump's fetish for firing people. The man had built his brand around the TV catch phrase, "You're fired!" As president, Trump got in trouble for the circumstances around his firing of FBI Director James Comey and his willingness to turn on or terminate even the most loyal aides if they wouldn't break the law for him (Secretary of State Rex Tillerson, Vice President Mike Pence and Attorneys General Jeff Sessions and Bill Barr come to mind).

After his fear of losing to Joe Biden turned to reality, Trump became the first president to lose an election and refuse to accept the result, assaulting George Washington's legacy in the process. Indeed, he had telegraphed his willingness to be a historic sore loser before that election, making clear that he would never accept being fired by the American people. No other president has reacted as badly to electoral disappointment, with the possible exception of James Buchanan, who allowed the Civil War to break out after the 1860 election didn't go his way — but he wasn't even on the ballot that year.

Obama wrapped up that section of his speech with the one lame joke in his repertoire against Trump (a visual gag about Trump's tacky architectural aesthetic that simply didn't land). He moved on, but the world of comedy fondly remembers his performance.

"Every time a politician cracks a few easy jokes they didn't even write, headline writers will rush to call them a 'comedian' which diminishes what we do," comedian Steve Hofstetter told Salon via Twitter. "That's like calling someone the president because they voted once. But Obama had something I've never seen from another president: He had timing. When most politicians deliver a joke, they seem surprised when it gets a laugh. But Obama was familiar with the material and he knew how to deliver it. While I'm sure he had writers, he executed as if he'd written the jokes himself."

It was a speech reporters would later claim left Trump fuming — but that seems to be a legend invented after the fact. If you watch the actual video of the event, you see that Trump went along with Obama's jokes cheerfully enough, even waving at the crowd. Whether or not he was just putting on a polite show, he didn't act like a man whose ego had been severely stung. His reactions are, dare I say, even a little humanizing: He appears for all the world like he's having a good time, smiling and enjoying himself like he did during a Comedy Central roast a few weeks earlier. Indeed, he later directed his anger not at Obama but at comedian Seth Meyers (whose barbs were much more pointed). Trump said he'd had a "great time" listening to Obama, was "honored" to be singled out by him and thought he had delivered his jokes well. Meyers, by contrast, he described as "too nasty, out of order."

This matters because it showed that if Obama drew blood, the target didn't realize he had been pricked. Obama had deftly struck a balance, drawing attention to the ways Trump is ridiculous while also remaining respectful. It wasn't until after the dust had settled that Trump began to feel aggrieved, eventually refusing as president to attend the annual correspondents' dinners.

Obama certainly made other negative remarks concerning Trump, but his 2011 monologue stands out because it feels like a prologue to the history we've been living since 2016. In that sense, it can be placed next to the "Economic Bill of Rights" section of Franklin D. Roosevelt's 1944 State of the Union address or Jimmy Carter's 1979 "Crisis of Confidence" address as a prophetic work of oratory. It's also the only historically significant presidential speech that was primarily meant to be funny (and largely was).

Arguably, that's the one sense in which it was misguided. Ten years ago it was easy to laugh at Donald Trump. Now that his Big Lie about the 2020 election is fueling a fascist insurgency, it is a lot harder to find him funny.