Despite frequent airplay for select songs, "Ten" deserves to be recognized as more than classic rock wallpaper 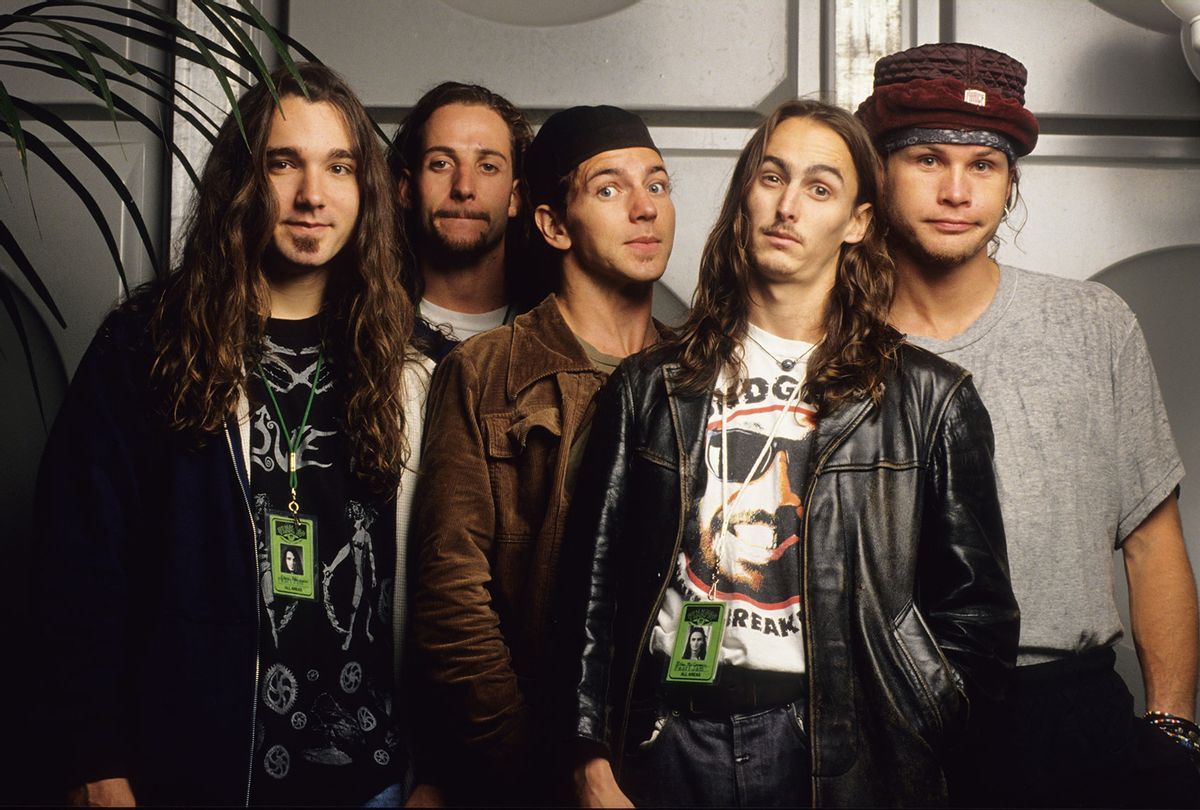 When I think of Pearl Jam circa "Ten," many things come to mind. Vocalist Eddie Vedder pulling a Spider-Man during shows and climbing up stage gear from which he'd dangle before somehow getting back down safely via crowd dives or precarious jumps. The arresting Mark Pellington video for "Jeremy," which illustrates the song's lyrics, about a school shooting.

However, a smaller gesture from the band's 1992 MTV "Unplugged" episode looms largest in my mind. As happened during electric Pearl Jam shows, the stinging, punkish "Porch" turned into a raucous jam with a frenzied bridge and forceful vocals. As the band's acoustic guitars fray at the seams, driven by Dave Abbruzzese's kinetic drumming, Vedder takes a marker and scrawls out "PRO-CHOICE!!" in big letters on his arm. The cameras continued to linger on his arm occasionally for the rest of the song, making it clear the message was heard.

As a young kid, this moment stuck with me perhaps because it coincided with my own growing awakening to the social and political activism espoused by my favorite bands. In hindsight, however, it feels revolutionary and deeply moving that the figurehead of a major rock band so openly and unabashedly supported this cause.

Vedder wasn't alone, of course; Nirvana's Kurt Cobain and R.E.M.'s Michael Stipe were also vocal about many social issues at this time. But at this early stage, Pearl Jam leaned heavier than both of those bands, both sonically and emotionally. The quintet's debut album, "Ten," is all raw nerve endings, a collection of songs about navigating grief and mourning changes and endings. At times, these feelings are expressed via frustration; at other times, they manifest as anguish and despair.

"Ten," of course, is also considered one of the major albums of the grunge era, alongside another 1991 LP, Nirvana's "Nevermind." Pearl Jam had a head start on Nirvana — their album arrived in August 1991, a month before "Nevermind" detonated in stores — but "Ten" took longer to take off: It was certified platinum on May 5, 1992, while "Nevermind" was certified four times platinum on June 12, 1992. Like many musical movements, grunge was always more of a press-driven construction than an organic scene.

However, a descriptor like grunge distanced bands from their '70s arena rock lineage, an era out of fashion at the time. (It's why Nirvana's love of bands such as The Cars and Cheap Trick wasn't stressed as prominently, either.) But grunge was never a monolith. Soundgarden and Alice In Chains were inspired by '70s psychedelic stoner rock and heavy metal bands such as Deep Purple and Black Sabbath. Nirvana, in contrast, took subtle cues from '80s college rock (Pixies, Smithereens) as well as hardcore punk and melodic new wave pop.

About the only common grunge inspiration across the bands was Led Zeppelin and their mix of heavy blues, pastoral folk and hard rock. The British group was certainly a prominent influence on "Ten," although the musicians who penned the foundational music — bassist Jeff Ament and guitarists Stone Gossard and Mike McCready — brought eclectic backgrounds to the album. Ament and Gossard were in the influential Seattle band Green River but were most recently in Mother Love Bone, which had glam rock and alternative metal overtones. (Tragically, the band's vocalist, Andrew Wood, passed away from a drug overdose in 1990.) Vedder, meanwhile, was a fan of not just R.E.M. but artists such as Neil Finn, Ramones, Bruce Springsteen, Talking Heads, and The Who.

"Ten" does boast energy, jettisoning the turgid and self-indulgent tempos of classic rock acts in favor of languid grooves — a song like "Alive" stretches and zones out, with dynamics offering respite from the heaviness — and crisp psychedelic boogie ("Deep"). Elsewhere, the album boasts surging punk ("Porch"), and hard rock that's both exuberant ("Even Flow") and elegiac ("Garden"), as well as intricate atmospherics, as on the opening of "Once," that sounds like water dripping magnified 100 times.

Time tends to flatten context around bands, which can be a good thing (old biases falling away often leads to a more open-minded listening audience) or a negative (important nuances around songs are lost). Pearl Jam often falls into the latter camp. "Alive" and "Even Flow" have been played into the ground on the radio, making them sound more like classic rock wallpaper rather than deep, meaningful songs.

But "Ten" deserves better. It's an album that's the result of musicians and lyricists wrestling with deep loss. "Once upon a time I could control myself" Vedder wails on "Once." Later in the song, he changes his tone slightly: "Once upon a time I could love myself." The haunted "Black," long a fan favorite, can be read as a song about finality: a death, perhaps, or a relationship that's irrevocably severed. "All five horizons revolved around her soul as the earth to the sun," Vedder songs.

"The song is about letting go," he noted in the "Pearl Jam 20" documentary. "It's very rare for a relationship to withstand the Earth's gravitational pull and where it's going to take people and how they're going to grow. I've heard it said that you can't really have a true love unless it was a love unrequited. It's a harsh one because then your truest one is the one you can't have forever."

Much of "Ten" is focused on absence. Vedder wrote a song trilogy — "Alive," "Once" and "Footsteps" — he called "Momma-son," centered on a young man whose mental health deteriorates after he learns the identity of his real father. Elements of "Alive" drew from his own life: As a teenager, Vedder learned his stepfather wasn't his biological father — and, sadly, the latter had passed away, so he never had a chance to know him. However, Vedder fictionalized his experience into lyrics that touched on incest, murder, abuse, and incarceration; together, the songs read like a short story. "Jeremy," meanwhile, was inspired by the true story of 15-year-old Jeremy Delle, who died by suicide in his English class. The song's narrator is one of his classmates left behind, remembering all the signs that pointed to (and his own complicity in) Jeremy's actions.

These are heavy topics, but Vedder's tone is empathetic and incisive. Even early on, his emotional generosity was already fully formed, as he dug into the heart of sensitive matters. "Release," a stream-of-conscious, primal song Vedder wrote about his reaction to finding out about his dad, is especially tender. Vedder is kind to himself as he sings, "Oh, dear Dad, can you see me now?/I am myself, like you somehow."

"Release" in particular meant a lot to Vedder. "Those words – I still refuse to write them down, even if they need them for publishing," he said in the book "Five Against One: The Pearl Jam Story." "I won't write 'em down. That was just something I hadn't experienced, it was so intense." He extended that same empathy to the protagonist of "Why Go," who is in the hospital against her will, and "Even Flow," written about someone experiencing homelessness. Vedder centers these characters in their own stories; it's their voices and perspectives we hear, rather than an outsider deciding the narrative shape.

That combination of honesty, empathy and intensity also made Vedder a formidable frontman. During Pearl Jam's April 1992 "Saturday Night Live" appearance, he repeated his pro-choice advocacy during "Porch." This time, Vedder was explicit: Wearing a tan shirt emblazoned with a coat hanger, he improvised some pointed commentary during the bridge. "A woman has every right to choose — to choose, to choose, to choose," he riffed. "Choose for herself." He didn't need to elaborate: His passion and message was clear, and underlined exactly why Pearl Jam and "Ten" became such enduring institutions.