"I love absurdist comedy": Ryan Phillippe on his career evolution and the fun of playing a rich jerk

The actor spoke to Salon about his latest film, the goofy comedy "Lady of the Manor" and how he chooses his roles 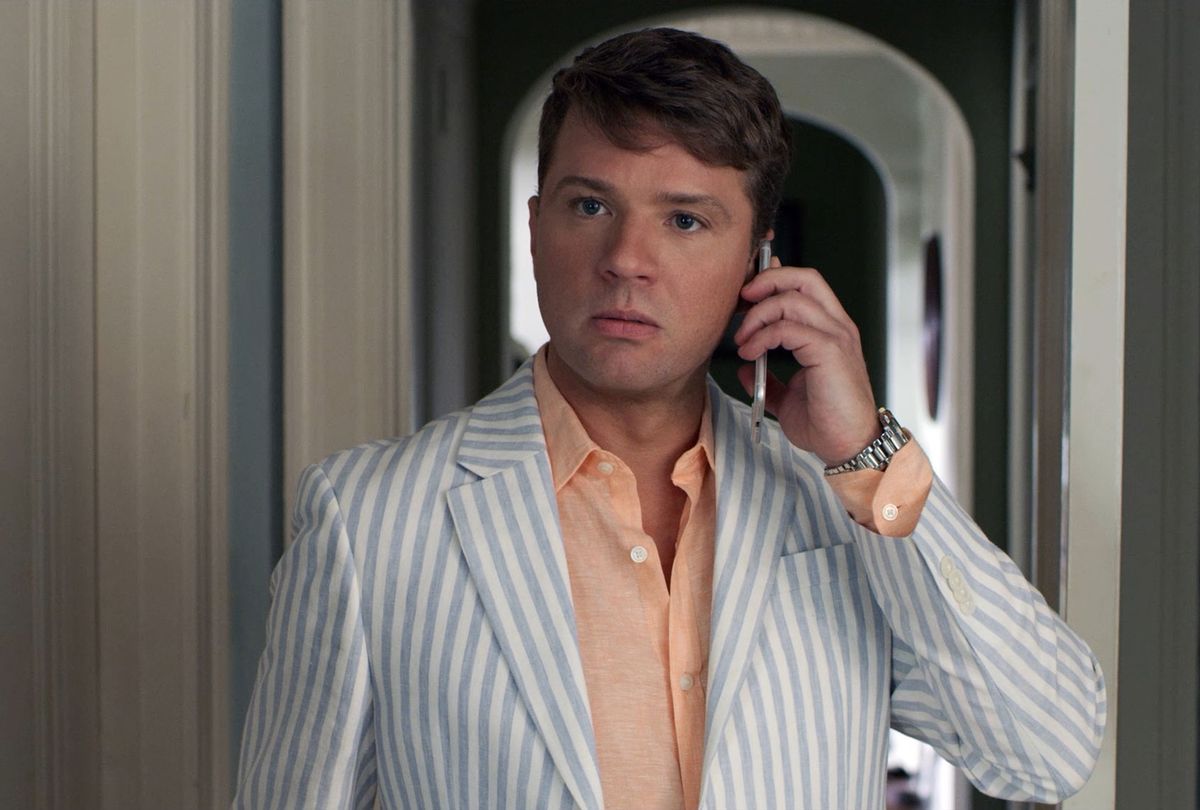 Ryan Phillippe in "Lady of the Manor" (Lionsgate)
--

Ryan Phillippe displays his comic chops in "Lady of the Manor," a touch of silliness about a Savannah estate where Lady Wadsworth (Judy Greer) once lived. Phillippe plays both Lady Wadsworth's husband (in a flashback) and her descendant, the lazy Tanner Wadsworth (his name also refers to his complexion) in the present day. When Tanner fires the estate's historic guide (because she won't sleep with him), he impulsively hires Hannah (Melanie Lynskey), a stoner who ends up being stalked by Lady Wadsworth's ghost.

"Lady of the Manor" offers Phillippe to play another rich, mischievous guy (think "Cruel Intentions," or "The Lincoln Lawyer"), and he is pretty amusing being cockblocked by the ghost of Lady Wadsworth, which prompts him to performs ungentlemanly acts.

The actor talked about his new film, his career as a whole, and his love of comedy.

You have some pretty amusing bits in "Lady of the Manor," from some brash, funny lines that talk down to people, to your comic reactions when Tanner is cockblocked. You have only made a handful of comedies in your career — "MacGruber" comes first to mind. What appeals to you about being funny and why don't you make more comedies?

Well, I'm not thought of that way, honestly, by very many people, so the offers don't come as frequently for drama and action. But I love it because it is such a completely different way to work, and there is something so freeing about playing a character that is ridiculous and kind of over the top. There is a license that comes with that. So often, when you're the protagonist in a feature, or the male lead, there are so many unspoken rules about behavior or the type of character you have to be for an audience to relate or connect. With this, you have the freedom to be silly and play and try different things. I had just finished the "MacGruber" series. So many times, when you are doing dramatic work, you are dreading certain scenes where you have to get really emotional, or angry, or dealing with the loss of someone you love, and that all ties into your own personal experience and becomes taxing emotionally at times. This is the complete opposite. I get to go and be a silly douchebag for the day, which is real fun.

You play, as even the proper Lady Wadsworth admits, "a real dick" in this film. You often get cast as spoiled, entitled characters in films, yet come from a modest background. What can you say about your penchant for playing rich douchebags?

I guess I was a little bit jealous, maybe, growing up with what some people had — when people would be pulling into the high school parking lot in a brand new BMW, and I was in my beat up Hyundai. So, it is a chance to get back at, or make fun of, some of the people I have come across in my life that had more than I did. It is an opportunity to make some sort of statement about privilege and wealth. I also think that playing something that is so far from yourself is liberating and fun. I love when I lose myself in a character, and the times I am happiest with the work I have done are in those roles where I don't see myself on screen anymore and I am watching a character. That's exciting for me.

Your character, Tanner, has a robust sex life. You've played many seducers in your career. You exude smarmy charm here, as when you dine with Hannah and get her drunk. This is awkwardly worded perhaps, but how do calibrate playing up or down your sex appeal when in a role?

It is something that I'm not terribly aware of or cognizant of when I am approaching a part. In that sense, it's a byproduct in a way. I don't see myself that way, personally. I don't think of myself in those terms, so it's really not something at the fore of my consciousness when I'm playing a part.

Tanner is lazy and does not have much of a work ethic. Yet as an actor, you seem to work frequently, and have recently started developing projects both as a producer ("Shooter," and "The 2nd") and even wrote and directed a feature ("Catch Hell"). What can you say about doing more work behind the camera?

It is something that I love, and I am getting more and more comfortable with as I age, the notion of being behind the camera. I've done this for 30 years now, and you just learn a lot I've been lucky to learn from Robert Altman, and Eastwood, and Kim Pierce, who have taught me a lot about filmmaking. It seems like a waste not to do something with that. I've worked on projects that have had a budget of $1 million and have had a budget of $100 million, and everything in between. You learn how to be efficient and maximize time on set and how to get the best out of your crew and the production at large. That comes from time you put in, and the number of projects you've done. You can work with a really talented director, but they have not had nearly the amount of time on set that you have. Working with Ridley Scott and Altman was an education. That was my collegiate experience, learning on set, and I want to do something with that knowledge. Actor-directors have different insight that maybe others for certain projects and certain material that can be really valuable and effective.

Your career seems to shift back and forth between films and TV. Do you prefer playing a role where you can develop a long arc (e.g., in a series like "Damages" or "Secrets and Lies") or do you prefer to move from character to character to do different things? Where do you think you do your best work?

I don't know. The industry has shifted so heavily. Everyone now does film and TV, or all the people who used to only do film are also doing television now. The business has changed so much from when I started and it [has evolved]. It comes down to the story you are trying to tell and [making it] enjoyable for the audience it is intended for and given them something worth watching, and I think that can happen in either medium. It does seem more today that the best writing and character development is happening in television. That will always be a lure for actors. You want the time to take a character from one point to another and not have it be within the confines of a 90-minute or two-hour movie. I found the experience of making "Shooter" really rewarding and getting to live with that character for three seasons and develop as it went. The difference between the two is not what it used to be. When you are on a TV set, it's shot like a film. That didn't use to be the case. TV has gotten a lot more cinematic. The line has been blurred.

You will probably be most remembered for your role in "Cruel Intentions," or for playing a gay teen in "One Life to Live," and turned in strong dramatic performances in films like "Breach" and "Stop-Loss." You have also worked with Robert Altman ("Gosford Park") and Clint Eastwood ("Flags of Our Fathers") and have appeared in an increasing number of action films. What observations do you have about your career and the opportunities you've had? "Lady of Manor" is so different from what I have seen you do.

You never want to get bored or complacent or stop challenging yourself. I'm glad I've not been typecast to any dramatic extent. Part of it is that I have to be interested in it to make it good or give a good performance. It has to be something that I want to see, or appeals to me, or connects with my sense of humor. As you get older, you just realize we all have a finite amount of time and are not guaranteed anything. You can only do so many projects. It does start to become about, "Well, who am I working with? Am I going to like them? And are we going to have a good time making this project? And how far away is it, and what is the commitment?" Because I have kids. There are so many things that factor into the choices you make when you are older that weren't relevant when you were younger. So, I do find myself evaluating things differently in terms of what I am going to give my time and effort to and take away my personal life for. That is something I wasn't nearly as focused on in the earlier part of my career, and now the experience matters a lot as well as material. You want to have an enjoyable experience and work with people you like.

How would you describe your sense of humor?

I love absurdist comedy. I have a dark sense of humor. But I like it to have elements of intelligence. I am a huge fan of Tim Heidecker — the whole "On Cinema" universe to me is one of my favorite things of the last 10 years. I like all comedy. I grew up idolizing the cast of "SNL," so getting to work with some of them now is so rewarding and fulfilling. I'm a comedy nerd. That hasn't been a large part of my career, but it's what I seek out in my personal time when I'm looking for something to watch.

"Lady of the Manor" is currently in select theaters and available on demand and digital.