I've spent the last year with ghosts – some family, some in bittersweet video games showing how it's hard to let go 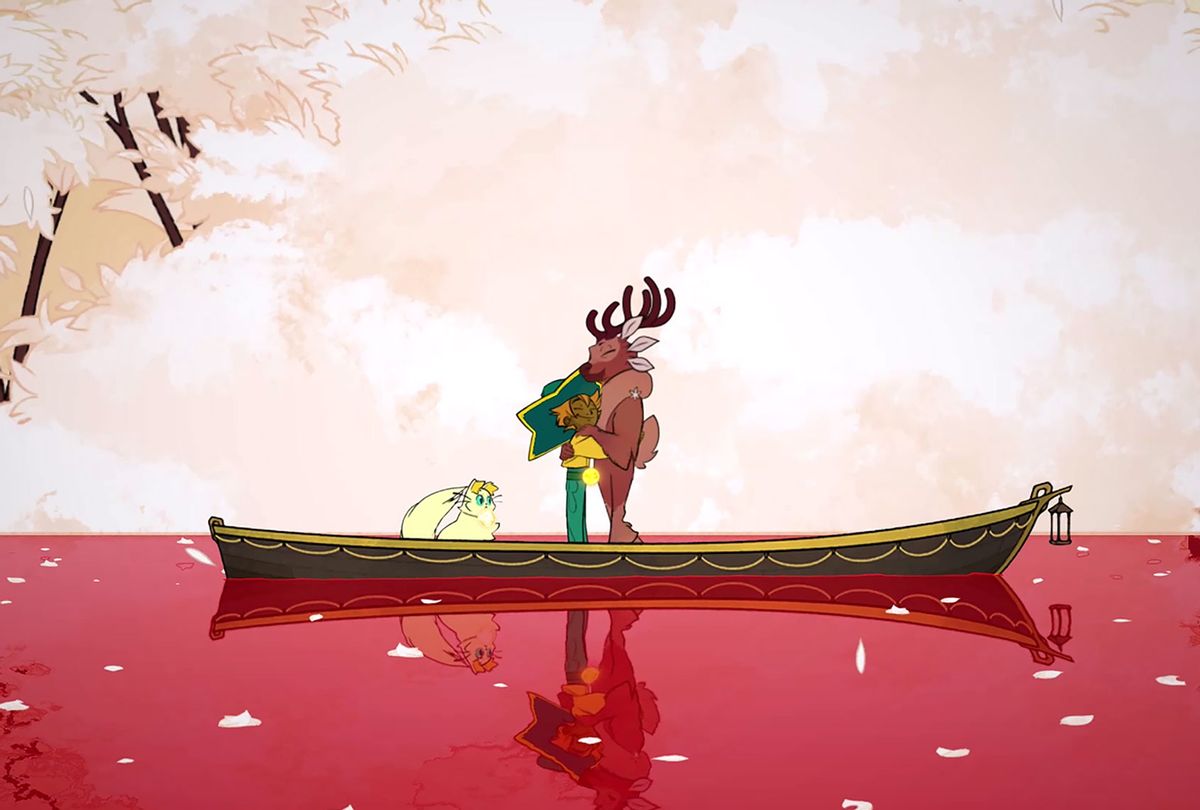 Stella in her boat in "Spiritfarer" (Thunder Lotus Games)
--

I've spent my year with ghosts.

First were the family ghosts, the scenes and snippets of stories that I found at the edges of my memory, as isolation stretched on and the rooms of the house grew more and more dull. Then curiosity got the best of me and I found myself down a 23&Me rabbit hole that ended with me staring at the livestream of a stranger's funeral, watching my dad's estranged father mourn his own. I imagined the ghost of the old man peering back at me from the tent set up in the middle of the graveyard — now, too, burdened with the secrets I'd been unraveling.

But I can't help his ghost. I've never learned to help people through their grief, or even to navigate my own. And in a year of widespread loss and grief en masse, I have struggled to feel like a good friend, a good partner, a good daughter. And then I found more ghosts, this time through a smaller screen.

From a cozy seat on my couch, I watch my best friend Gwen, in the form of a beautiful animated deer, take a drag from a cigarette as she reminisces with me about our youth shared in Europe, before turning solemn as she considers unresolved feelings about her family. She is, of course, not real.

I'm playing a Nintendo Switch game, "Spiritfarer," released in August 2020. In it, I am Gwen's friend Stella, come to ferry her soul through the afterlife. But before she's ready to cross through the final threshold, Gwen has to first confront the painful struggles of her life.

And the pain takes me by surprise, pinching in my chest as I read her dialogue, relating to a rift in her family, which seems to be her unfinished business.

"I've been thinking about Father recently," she tells me from her cabin on the ship, as the sound of waves plays in the background. "When he left with Doug, I didn't feel anything. No sorrow. No hate. No relief."

As she begins to work through it, we set sail back to her old haunts, her old home.

We pick up other spirits as we sail — my old mentor, a loving uncle, a neighbor suffering dementia, a pair of criminals looking to pull one last job. With them, they bring joy and love, but also regret. They bring challenges that I must help them with, by creating safe and cozy homes for them on my ship, taking them to places they used to visit, and helping to move their stories forward until they feel the pull of the Everdoor.

As I row Gwen through her final crossing, she reflects. On the way she thought people went through life without caring about each other; but she knows better now. On forgiveness.

"I still don't know about Father," she tells me as I row her through her final passage. "I should probably forgive him now. Find that last shred of strength left in me. Would that make me a better person?" she asks me as the game's quiet music lets me hear the splash of my oar, cutting through the red water.

As we approach the Everdoor, she tells me her questions no longer matter, because I'm there with her in the end. "I can't hold it any longer," she says and I ferry her through the last few feet. She crosses over, her spirit rising to become a constellation in the night sky.

Am I sad that Gwen has moved on? Am I happy for her? Gwen's departure leaves me melancholy and I wonder at the emotions I feel at a simple video game. Maybe this is how I'm channeling the collective feelings of loss that we've all been accumulating. But Gwen seemed real, her pain seemed real.

Gwen was real, in a way. She was shaped in part by stories shared by the game's development team. As were the other characters, says Nicolas Guérin, the game's creative director. His grandmother can be found in a lynx called Astrid, whose philandering husband Giovanni reflects the struggles in marriage that Guérin's own grandparents had. Another character, Buck, who stays with you through the end of the game, is an avatar for a friend who died when they were teenagers.

"When you talk about death, generally you want to do an apology. You want to talk about someone and only talk about the nice things they did. But of course, it's a bit of a hypocritical thing. It's [looking] with rosy glasses about someone's life," he explains over a Google Meet call from Quebec. Halloween decorations adorn the mantle behind him.

"Many people in their lives did terrible things, had s**tty behaviors. And we wanted to make sure that that also was portrayed in the characters in 'Spiritfarer.' For the example of Giovanni, being someone who can't, for the life of him, be faithful to his wife. And he still dies being unfaithful. And it's not nice, but it's what he did. And that's what his wife actually understood about him. Like, 'I loved him, but still, even at the end, he betrayed me, so f**k him,'" Guérin explains, conjuring images of Astrid's last moments in my rowboat.

In her monologue, she tells me that life is suffering,

"I don't think it's wise to live that long, Munchkin," she says as I pull on the oars. "And being this old is disappointing. You just end up being ugly on the outside. And rotten on the inside. And it hurts so much!"

But despite that, she has no regrets. "The world is cursed. But still, you find reasons to keep on living," Astrid continues. As the music swells, she tells me that amid the painful moments, she left behind ones that might make our world – and me, Stella – better.

"Some of them will live on forever. In you, in others."

Her words encapsulate a foundational belief of the game. "Death is something that can be celebrated, as weird as it sounds," Guérin told me. "One of the inspirations we had was in Mexican culture. Día de los Muertos, where they find solace in the continuum of lives and [do] not just think of [death] as a pure loss. There is a continuation of who we are, our legacy, our heritage, and how we go through life by knowing that we are part of something bigger than ourselves." 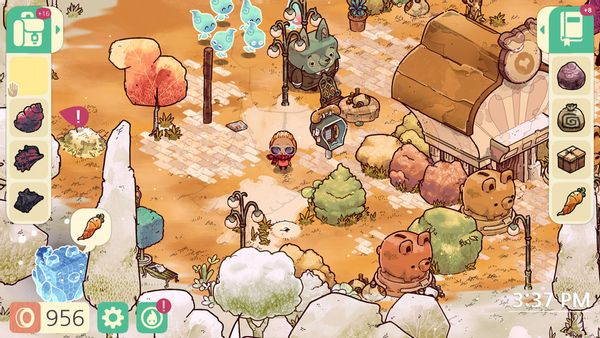 On another day, on the same couch, I downloaded another game that the Internet thinks I'll like. "Cozy Grove," released in March 2021, is full of ghosts, too. Instead of sailing with them, I am stranded with them on a deserted island. In another game, this might be terrifying — ghosts are often the enemy, capable of doing you harm. But in this game, the ghosts are as stranded as I, seeking answers and resolutions for distant memories.

The game takes inspiration from "Animal Crossing" and many of its mechanics will feel familiar — fishing, harvesting flowers, catching bugs, expanding your home and making improvements to the island, as well as the real-time clock — but the stories that you unfold as you help the inhabitants take "Cozy Grove" from a casual collector's game to an emotional allegory. The more you help these ghosts, the more they remember their lives, and the stronger a hold they seem to have on their corporeal forms. Each time you help a ghost, they reveal more of their story with you — sometimes dark memories, other times cheerful revelations — and the island around them is bathed in a warm glow that allows you to interact with more of your landscape.

"I want to do more for people than just entertain them when possible," David Edery told me via email. He's the co-founder and CEO of Spry Fox, the developer of "Cozy Grove." He says the main goal for the game was "to encourage empathy for others, and it's harder to feel empathy for others if you don't understand or have any appreciation for the sorts of challenges that they've struggled with in life. So we try to help the player see those challenges."

"So it's been incredibly meaningful and satisfying to me to receive messages from players who tell us, 'This game helped reduce my pandemic stress,' and 'This game helped me process a painful thing that I've been struggling with.'" Edery continues. "So many people have reached out to say that 'Cozy Grove' helped them process their troubled relationship with someone in their life, or that it has helped them manage their grief at the death of a loved one."

Guérin, too, has heard from players. "[We] received tons of mail from people telling us how good the game was for them and how they could cope with loss, and grieve their own way through the game. . . . The most touching ones were some people who were working in healthcare. They wrote saying that, 'Thanks to the game I could retain all my passion for the work.'"

Perhaps the biggest twist of "Spiritfarer" is that, despite having been completed before the onset of the global pandemic, Stella's story had already been laid out to reveal to players that she had spent her life as a healthcare worker, tending to patients in a palliative care ward. Now, fallen ill and at the end of her own life, she is tasked with shepherding the ghosts of people close to her before she, too, can cross over.

Immersed in these ghost stories, it's been difficult for me to see them as anything but a reflection of the time period. As real or metaphorical ghosts have continued to form as COVID-19 deaths have slowed but not stopped or even leveled off, the struggle to cope — with the unknown, with financial instability, with a barrage of bad news, political strife, our own grief and loss, and each others' — is continuous, neverending.

And as I play these games, it feels that maybe our pain and our struggle to make peace with ourselves will follow us well past the ends of our lives. Until it's finally time to move on.