Prakash spoke to Salon about "To the End," which tracks her efforts and that of AOC and two other eco-activists 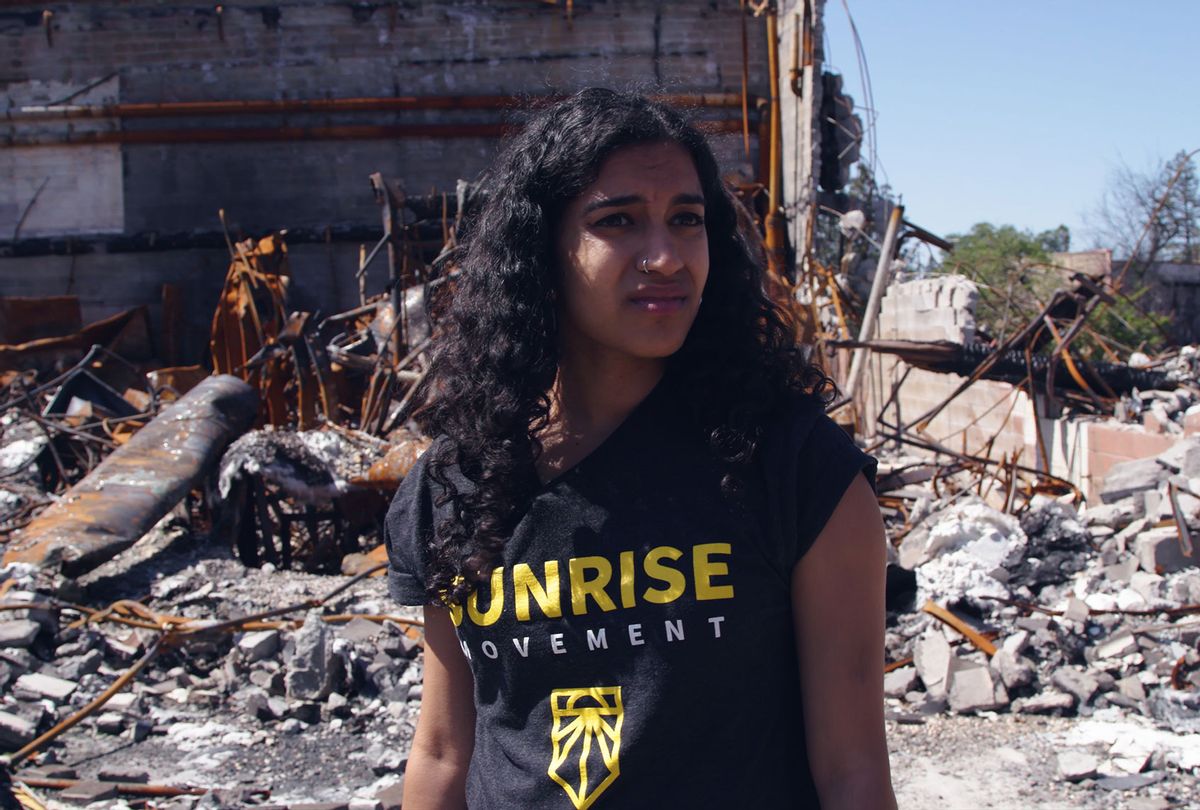 Varshini Prakash in "To the End" (Amber Fares)
--

The film traces these women's efforts to raise awareness and create change over a three-year period, starting in 2018, with the fires ravaging Paradise, CA, through the 2020 election cycle, up to the November 2021 vote on Biden's Build Back Better bill. They are all concerned that the climate crisis is not getting the attention and policy it needs. If the Green New Deal is adopted, jobs and enhancement to make life more sustainable are viable. Moreover, economic, social, and racial justice will also improve.

Varshini Prakash is particularly active in the campaign, staging a Sunrise Movement sit-in at Nancy Pelosi's office in 2018. This action is impactful; the organization mushrooms to 300 chapters. There is also optimism as youth activists support Bernie Sanders' in his 2020 Presidential run because he is advocating for the Green New Deal. When Biden is elected, Prakash becomes an adviser to his climate task force (along with AOC). Then, in October 2020, several Sunrise Movement activists staged a hunger strike to protest against Senator Manchin's stranglehold on the Build Back Better bill. These episodes, as well as other setbacks — such as Jessica Cisneros' failure to defeat U.S. representative Henry Cuellar — show the fight for change will not be quick or easy.

Prakash spoke with Salon about her efforts to create change and making "To the End."

How did you get involved in this documentary, and what do you hope your participation in the film would achieve?

Really, I was not expecting to get involved in the film. It was probably following the 2018 Pelosi action that Sunrise Movement did and representative Ocasio-Cortez participated in. That's how we got involved with each other. The movement and the visibility around the Green Deal exploded in that moment and it became this conversation that was really becoming a hot-button litmus test in the Democratic party and on the presidential trail. Rachel was paying close attention to it as she watched these women powerhouse candidates in the 2018 midterms and came across us through that process.

You couldn't have anticipated how you would be featured in the film. Can you describe the process?

I feel the first couple years of being filmed, the movement was exploding. At that time, we went from 10 chapters across the country to have 10,000 volunteers banging down our doors asking, "How do we get involved?" Dozens of congressional officials are paying attention to us. Thousands of articles are being written about us. I felt like all of 2019 and 2020 was drinking from the firehose.

For so much of it, I know Rachel was there, but I didn't process it was going to be made into a movie and tell a story of my life and those of other young people who had a vision and were experimenting and putting our hearts out in to the world. It's both exciting — because it is important that that story gets told — but it was also deeply nerve-wracking for me to see that happen, because it's a level of vulnerability I didn't anticipate. [Laughs] I just knew my friend Rachel was there at every event, and retreat, and meeting we had. I trusted her because I knew "Knock Down the House." She was very aware of the ways in which our work is sensitive and can be used against us and she built a lot of trust from the beginning.

You talk about hating the news as a child, but now you are making the news. What can you say about your politicization? How did you become active in this?

I'm not clear that I like politics now, either. [Laughs] But I think at a certain point you realize that everything that you care about — every value that I hold so dear — the need for people to experience equality when it came to food, water, and the air we breathe, and seeing the level of injustice that was perpetrated on communities that experienced the climate crisis. As I got older, I didn't feel politics was for me, but I knew that I would never have a seat at the table if I didn't fight for it. And this realization, that politics is not the end of the road, it is just a tool that we use to get there, and it is the way we govern societies and how power is distributed — whose life matters and whose doesn't. To me, it's not about wearing the suit and walking around Capitol Hill, playing the part of a powerful figure, it's about exerting yourself, and participating and being an active part of your democracy and making your world better and seeing that as the core purpose of your life every day. Politics doesn't have to be this thing that is inaccessible to all of us. It is what we make of it when we participate. A lot of ordinary kids who have a vision, a dream, a drive, and a passion and compassion for the world around them, is the ultimately motivating force that can change the world.

Mic drop! Can you talk about the impact of Sunrise Movement's activism?

We set out in 2017 to build a youth political force that could make climate change matter in our politics. It's incredible to remember just how much politicians would not touch it. It was the third rail in American politics and even in the Democratic party. We didn't necessarily play by the rules or do everything politely, but because we agitated, and organized, and were disruptive, and because we challenged the status quo – in the 2020 presidential cycle, we saw every major candidate release climate platforms, swear off oil and gas money, and set a precedent and a bar for policy that will have to be held up for every president that follows. We saw the real proliferation of a Green Deal, a decades-long social and economic mobilization that our country must undergo to solve the climate crisis. Economic and racial justice become how we understand climate action and solutions for the crises rather than silver bullet market solutions that may just be one piece of the puzzle.

What is most inspiring to me is to see the level of latent energy and the firecracker that is ready and willing to explode in youth energy that is freaked out and wants to do something about it and is just waiting to be ignited. That was the greatest victory of the last few years. People see the demonstrations, but they don't see the trainings, the collaboration, the artwork, the learning, and relationships and experimentations that happens. They see the efforts that succeed, but not the ones that fail and develop the young people. That piece keeps me inspired and activated — every time you see a 16-year-old discover their agency for the first time and feel powerful and that they can do something to impact the world.

You worked with Bernie Sanders, who advocates for the Green New Deal during his failed 2020 Presidential campaign. After Biden was elected, you became an adviser to his climate task force. His Build Back Better bill was actually more ambitious than Bernie's work with the Green New Deal. Can you talk about that and your work in that capacity?

We advised on the policy framework for Bernie's policies that he ran on. When he lost, one of the core concessions was this Bernie-Biden unity task force, and I served on that. It was a unique opportunity to bring so much of the vision that Bernie and Sunrise were fighting for on the campaign trail and bring it into the agenda Biden ran on and won. It was an opportunity. We knew we weren't going to end up with Bernie's climate platform, but we were able to improve on and add a whole host of different climate policies that, if passed in the languishing BBB sad landscape of today, would be huge. Like the civilian climate core that would employ potentially thousands of young people from disadvantaged communities to clean up our environment and advert a climate catastrophe. It was pretty scary to be on that task force, but also in those moments, you remember when you are in that room, you have opportunity as young people to bring our values and vision and policies that matter to us to the table.

It's honestly devastating. We were so close, and to see someone in party destroy it, it was extremely painful.

Can you describe the complexity of emotions you experience in your work? The film shows that you have a thick skin and resilient nature to do this work. How do you stay optimistic?

I find that the key to staying optimistic or having hope is – well, not spending too much time on Twitter – but also really allowing yourself and honoring the feeling grief, pain and fury and whatever is moving through you. In the climate movement, people can lose themselves in the gloom and doom or pretend everything is OK and not process the grief. So, a big thing for me is creating strategies to feel the full scope of the emotional intensity of work — journaling, meditation. We have a strong storytelling culture in our organization and ensuring that I am not letting myself numb or get subsumed by the emotional intensity of what I'm feeling. And having a strong spiritual practice of gratitude. There is something about being really intimate with the potential demise of the world that makes you almost ironically really intimate with the beauty of it and the immense gratitude we should feel to be here. Being able to hold both of those things at once is key to my ability to persevere.

It's mourning the loss before you have it. You talk about the numbness you felt reading the 2021 Intergovernmental Panel on Climate Change report from the climate change summit, and I share your terrifying fears that we are not doing enough to create a better, safer, more sustainable planet. We also need to combat social, economic and racial inequality. If our politicians aren't responding what can we do?

Organize better, organize smarter. We need to build power that can outweigh the power of these extremely corrupt organizations and corporations that are throwing our future into peril. The struggle that we have had to pass climate policy — or any policy that will help people — in this country is devastating, and it begs more questions not just for the climate crisis, but for the future of this country and where it is headed. But I'm positive that the only antidote to a very uncertain and chaotic future is for people to get involved. From my understanding, that is the only thing that has ever truly changed the course and direction of a country's history. There are these technological fixes and changes that might happen, but we have seen the ways in which organized money and power has resisted those shifts. Ultimately, it has to be organized masses of people that make it happen. There's still hope. I'm still here fighting. And I will be. That doesn't mean there aren't dark days, but the reason we call ourselves Sunrise is because we believe the sun is going to rise again and we believe that is on the horizon. We have to hold on to that hope even in the moments that feel the darkest. Because otherwise, how is anything going to change?

"To the End" premieres at the Sundance Film Festival.