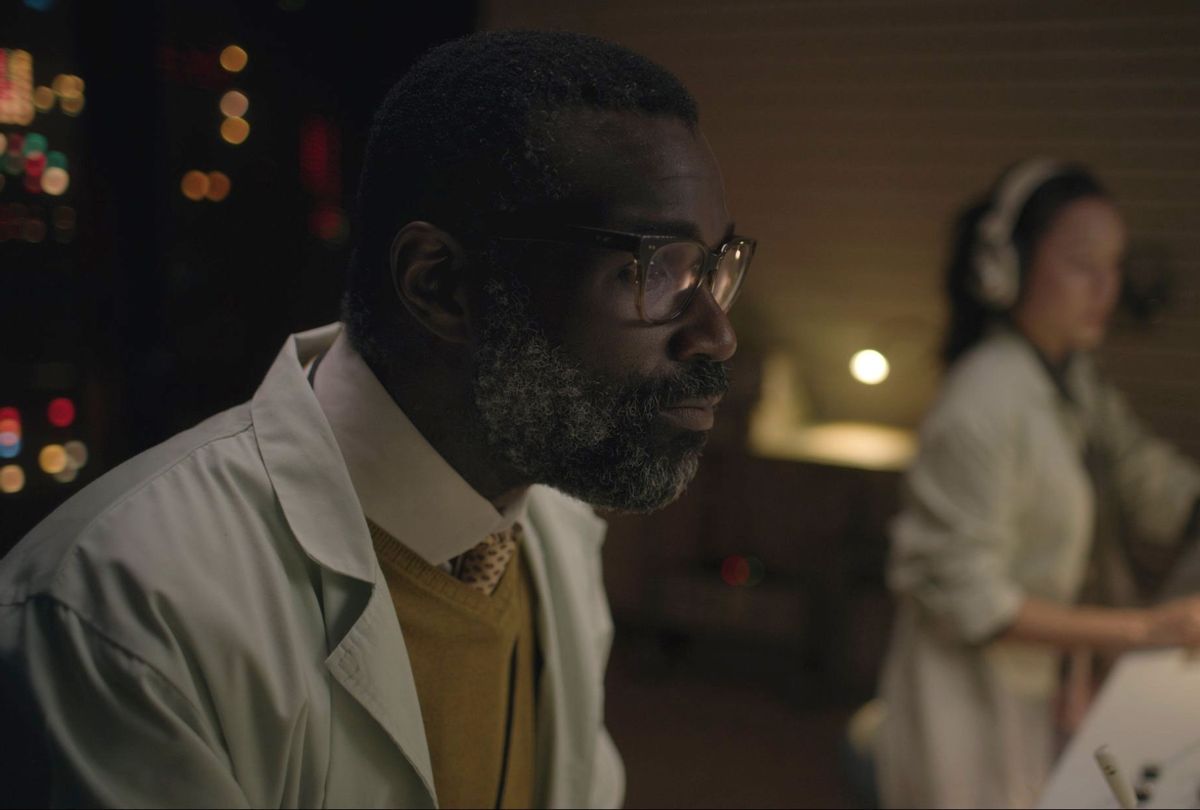 Tunde Adebimpe maybe best known as the lead singer of the band TV on the Radio, but for the past two-plus decades, he has been acting as well. (Check out his auspicious feature debut in "Jump Tomorrow.") He has often worked in ensemble casts in popular films such as "Rachel Getting Married," "Nasty Baby," and "Marriage Story," and has also had recurring roles on TV shows such as "The Girlfriend Experience." He is currently filming "The Idol" for HBO.

Adebimpe gets a plum part in the fabulous mindbender, "Ultrasound." He plays Dr. Connors, who heads an institution where Glen (Vincent Kartheiser) and Cyndi (Chelsea Lopez) are being treated by his colleague Shannon (Breeda Wool). It would be both complicated and criminal to explain how Glen and Cyndi — who first met at her house when his car broke down one rainy night — ended up in the facility. But what Dr. Connors is doing, which involves sounds and hypnosis, impresses a bunch of suits who attend his little demonstration.

This slow-burn sci-fi thriller takes a while to reveal what is going on, but viewers who give themselves over to "Ultrasound" will enjoy the ride. Watch an exclusive clip of Adebimpe from "Ultrasound" below, and then continue reading for the interview:

Adebimpe spoke with Salon about his new film, his career, performance, and power.

What fascinated me most about your performance in "Ultrasound" is how Dr. Connors is a voice of authority. He moderates and modulates his tone throughout. Can you talk about how you approached the character in general and his voice in particular?

Dr. Connors was very intuitive. When you are talking to corporate and giving a Power Point presentation and trying to get money out of someone, you are a bit of a car salesman or computer salesmen, going down the list of attractive qualities of the product. In this case, to use this new technique to enslave someone against their will or knowledge. The scene where he is talking to the military brass was my first day on set and that monologue was a thick block of text. It took me a second to get up to speed.

The voice he's using with Shannon, I saw it as almost as a therapist's voice or attitude — trying to get someone to do what you want them to do, but you want them to think it is their idea. That was the feeling I got from that interaction. It's very measured and almost conspiratorial. Once she questions it, it flips into an authoritative thing, which is a weird gaslighting technique. The modulation happened naturally with the situation and the person I was dealing with.

RELATED: How to watch this year's Oscar-nominated animated shorts, from cheeky birds to grisly torture

Likewise, there is a very performative aspect to your character, with the dialogue and the setting. I'm interested in how you see performance, be it in film, or on stage as a musician. Can you talk about that? We are both performing right now, trying to elicit what we want or not reveal too much.

Sure, or you hope you get your point across or not be misunderstood. You are picking from your toolbox. What are the things I have been doing that have worked, or what have I done to steer things in a direction that I learned from prior experience that doesn't yield the results or shift the situation in the way I want it to? All of us are kind of a mess, and what I love about acting is accessing parts of my own particular mess. It's like inflating a balloon — I can blow all of my anxiety into this character and express myself without any repercussions. I'm not going to be ostracized or judged unless that is how the story goes.

I've been fortunate to have music as an outlet. Performing on stage is a weird thing. If you were to ask me if I liked performing on stage, the immediate answer would be, "No, I don't." I don't like being in front of people, which is weird, because that is how I spent the last 18-20 years of my life. But I remember the first shows where I had to be in front of people, I had a noise rock band, and we hunched on the floor pushing guitar pedals and playing kids toys. The purpose was to drive everyone away. Whoever hung out we gave them a CD of what we made that day.

With TV on the Radio, the first couple of shows, I just had crazy stage fright, and I kept my eyes closed. A friend said you should open eyes to connect because no one else was looking at the audience. I'm up here without an instrument, I should be doing something and not wishing I wasn't here. Then I saw a videotape of a performance and I saw what they were talking about.

I would go to hardcore shows, and it would be mayhem. I decided, "You are in my room, and I'm about to show you that this is our room." The band kicks in, I jump into the audience. If I am up there, I have to do something. My personality is, if I were to anthropomorphize it, I'm an indoor cat not an outdoor cat. But when I am in a live situation, the trick is to jump. You will land somewhere. All you have to do is land. It doesn't matter what you do in the air, but if you can spit a bottle of water and do a pirouette, that's great too. That's a way to lose yourself. The best shows I've had are the ones I don't remember. If I don't recall what I've done I feel better about it.

That's why it's hard for me to watch a movie after I have made it. The first time I see anything I am in, I am convinced I am the worst part of it. Everyone is doing a better job. Is what I thought I was doing actually what I was doing? I don't feel that way with "Ultrasound," but it's hard to watch yourself and take yourself out of it.

I have been working on a book with a friend. We met when we were 19 in New York and were roommates for a while, and we both realized we had journals and wrote incessantly. It was pre-internet and cell phone. We cross-referenced to see what matched up and we were shaken by what we did. We have a reference point for things, and it's not who I am right now. Looking at something from 20 years ago, I'm like, "I don't know who that person is." There are glimmers of things you recognize. It's cool if you achieve that in acting. I am not seeing myself, but the balloon I have blown, this concern, or empathy, anxiety or anger for this situation. I launched something and it landed in a way that is close to how I thought it would land.

"Ultrasound" is cerebral sci-fi film that taps into ideas of hypnosis and "the state of sustained suggestion." We like to think we won't fall for tricks, but we all make simple errors. I'm curious about your thoughts on this topic, and how people are easily persuaded and seduced?

I feel with music, what has connected with me, is something I will automatically put on repeat, so that in itself is a hypnotic suggestion, like a spell being cast. The initial connection comes because you are hearing something musically that you are drawn to and haven't heard before. It shows up, and there's a familiarity that draws you in. Or you hear something lyrically that fills this space. Something you are trying to figure out and, as abstract as it may be, it gets answered in a song or a performance. If you have a lot of anger towards a system, or you feel like you are being shortchanged and someone rolls up and tells you, "This is how you can take back that power," it fills a very large gap in your lack and you suddenly belong.

"Ultrasound" sucked me in and seduced me. Is this film a cautionary tale with its themes of surveillance and manipulation?

[Laughs]. Part of me is like, I don't think it could ever happen — but that's how they get you!
I think it is cautionary in the sense that it is of the time — because there would have to be a massive movement to detach yourself from social media and any tendrils it had — but that movement could only be organized by social media! [Laughs] The thing is to have a very strong skepticism of things, and to realize that if you are breaking off from something, it might feel you are swimming out in the middle of the ocean, but you might be better off looking for another island.

Do you like playing morally ambiguous characters? I see you as being so affable.

I think a morally ambiguous character is the most interesting type of person to play. How can this person be like that? Well, this happened to them, and they no longer care how they are perceived, and they will do whatever it takes to get what they want. I have a lot of friends who are lovely, kind, considerate, and caring people. That is definitely a choice to make your life easier, but I know you are a f**king mess in there. I admire that you decide to walk into the world and try to make it [better]. There is a lot of horror, and anxiety, and calcified depression that can get weaponized. But you can realize it's a choice. I'm happy I have outlets: drawing, or painting, or writing, or making music, or acting. I am lucky I have that to process the universal human thing and the world around you. There is no way to do that if you are denying these emotions or feelings. Letting yourself getting too bogged down by it is just not productive in the sense I'd like to get on with my life and experience the good things. It a choice to be a nice person. Because just as easily, you can be firing off sparks based on what's happened to you. You fire off sparks, you start more fires you have to put out, so basically it is easier to be nice.

"Ultrasound" is now available in theaters and on VOD. Watch a trailer for it below, via YouTube.