"The White Lotus": When it comes to vacation, what does pleasure actually look like?

Is pleasure an illusion? Or can it be found in a "big plate of pasta with giant clams" and the right kind of sex? 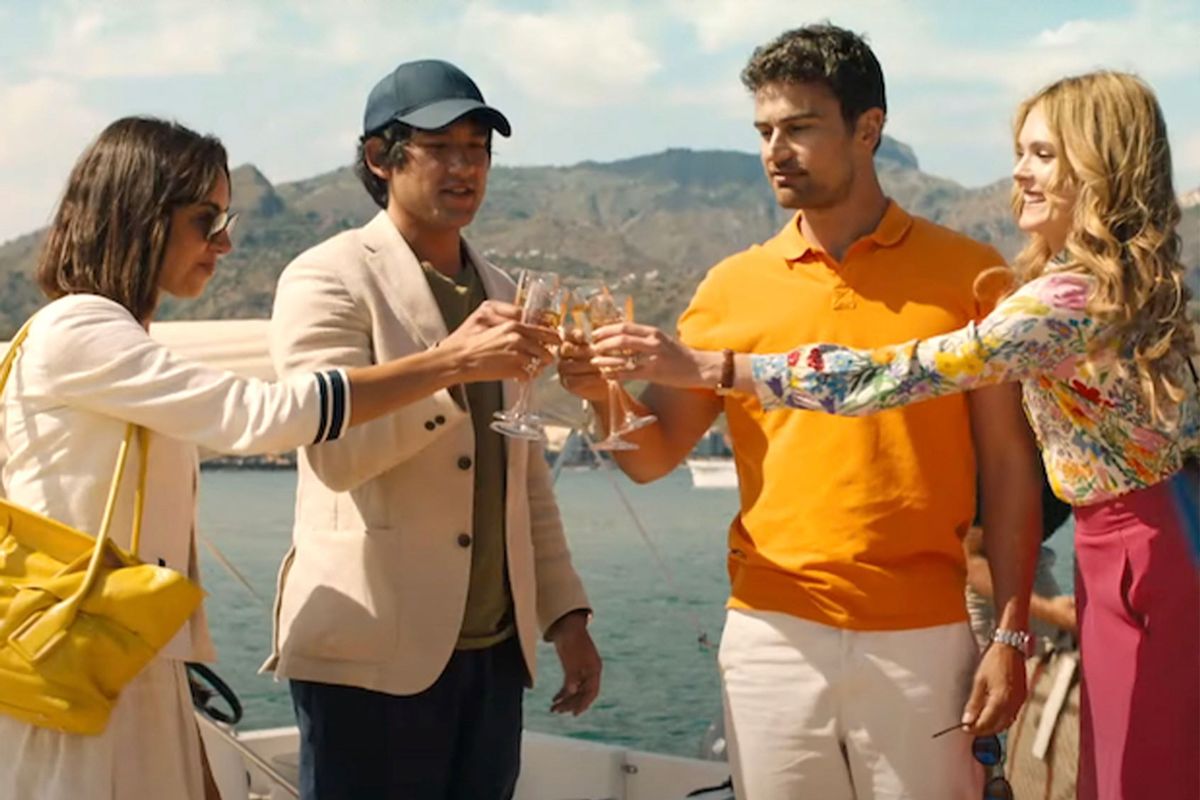 Several years ago, I was on a flight to Washington, D.C., alongside dozens of travel agents headed to the nation's capital for an industry conference. It was a weird mix of people and patterns: I spotted not one but two floral Tommy Bahama shirts layered under blazers.

My seatmate was a 65-year-old former preschool teacher, who had launched a small travel agency with her wife after retiring. The travel agent had brassy highlights and a Boston accent. The cautionary absolutes in which she spoke — like "Never get a tattoo after-hours in Tokyo," or "Palm Springs fortune tellers are the least skilled in their profession" — sounded as though they were grounded in uniquely personal experiences.

After we began descending, the conversation finally turned to me, and the travel agent asked about my line of work. I told her that I was a food writer, and she solemnly nodded as she tucked the in-flight magazine into her purse. She then told me that a big part of her vacation planning for couples was centered on two cultural clichés: first, that vacation sex is the best sex you're ever going to have, and second, that resort food is likely the blandest in the city.

Her job was to make sure that the former was true, while the latter was somewhat mitigated.

"In the end," she said. "It's about managing my clients' pleasure."

In the second season of "The White Lotus," both of these assumptions regarding sex and food are subverted as an overarching question emerges: When it comes to vacation, what does pleasure actually look like?

Sex is at the center of this Italian drama, more so than it was in the first season of Mike White's acclaimed HBO comedy-drama, which was set at the titular White Lotus resort in Hawaii. Early on, we're clued into who is having the kind of sex they want to be having and — more importantly for the plot — who isn't.

On the other side of their hotel wall are their "couple friends" — well, "friends" is exceedingly generous at this point — Cameron (Theo James) and his wife Daphne (Meghann Fahy), who have faced trauma surrounding their intimate lives following a near-deadly childbirth experience. However, their seemingly passionate sex life is fueled by resentment, infidelity and gutting power plays.

As James said in a recent conversation with The Daily Beast, with his character, "there's a possibility that he f**ks anything and everything walking on legs. That animalism isn't constrained by being straight — although he is, and he's married. He's got a hunger in him."

Down the hall are three generations of Italian-American men, who are on vacation together. There's Dominic Di Grasso (Michael Imperioli, who has aged like fine wine), his son Albie (Adam DiMarco) and his father Bert (F. Murray Abraham).

Put simply, Bert is an old-school misogynist who thinks affairs are fine as long as they're discreet. (Spoiler: His weren't discreet.) Dominic is a sex addict, which has ruined his marriage and frayed his relationship with college-aged Albie, who considers himself to be a "nice guy" and comes with his own sexual hangups.

Perhaps the two most interesting characters in this season, however, are escort Lucia (Simona Tabasco) and Jennifer Coolidge's Tanya (of course!).

Lucia has now slept with Dominic, Albie and Cameron, the latter of whom still owes her money. And while Lucia provides a certain kind of concrete fantasy for her clients — literally "managing their pleasure" as the travel agent I had met might say — Tanya is becoming increasingly unmoored as her concept of a fantasy vacation steadily dissipates.

Tanya came to Sicily to be with her husband, Greg (Jon Gries), who can't be bothered to show her any interest. Tanya puts forward her forward best efforts: She rents a Vespa, slips into lingerie and waxes poetic about the romantic dinner she wants to have with Greg.

"We drink lots of aperitifos, and we eat big plates of pasta with giant clams. We're just really chic and happy. We're beautiful."

"We drink lots of aperitifos, and we eat big plates of pasta with giant clams," she says. "We're just really chic and happy. We're beautiful."

Things don't always turn out according to plan, though, on a stay at the White Lotus.

The story told by food, meanwhile, is more understated than the one told by sex. Yet it's an ever-present fixture, even in its mundanity. As The Wall Street Journal's Jason Gay astutely pointed out a few days ago, the great mystery of this season thus far isn't who will be murdered, but rather the constant dining at the hotel. While the White Lotus is almost definitely an all-inclusive resort, these characters are certainly affluent enough to take a few culinary field trips.

"These decadent television characters can afford any meal, anywhere," Gay wrote. "Why do they stick with the same in-house menu?"

This highlights one of the central push-pull tensions that underscores many couples' vacations: the tension between novelty and routine, or perceived safety. This tension is actually built into how we talk about experiences while traveling, from "once-in-a-lifetime experiences" to "vacation flings." Novelty can provide us with both fleeting moments of pleasure and a way to self-actualize certain parts of who we are or want to become.

Food can, of course, serve as a conduit.

Tanya didn't want to just eat linguine alla vongole. She also wanted to feel chic and beautiful while sitting across from a husband who wants to have sex with her as much as she does with him.

Why is everyone drinking now-innumerable Aperol spritzes on the pool deck?

Why is everyone drinking now-innumerable Aperol spritzes on the pool deck? It's part of living out the Italian vacation fantasy; drinking one there hits differently than drinking one while looking through an apartment window that opens up to, say, a Chicago alleyway. This consumption both feeds into and helps perpetuate the myth-making inherent to any vacation planning.

The bland nature of hotel dining room dinners are why characters' attempts to move off-menu signal something greater. For example, when Tanya despondently scans the continental breakfast spread and flags down a waiter to inquire if she can have a slice of "OREO cookie cake," it's an overt sign that things aren't going well behind the hotel bedroom door.

Just as in airport bars, time on vacation is something of an illusion. This season of "White Lotus" seems to ask if, at least for these über-rich characters, true pleasure is, as well.

about "The White Lotus"