Does cinnamon belong in chili? The Midwest says yes (and so does Fran Lebowitz) 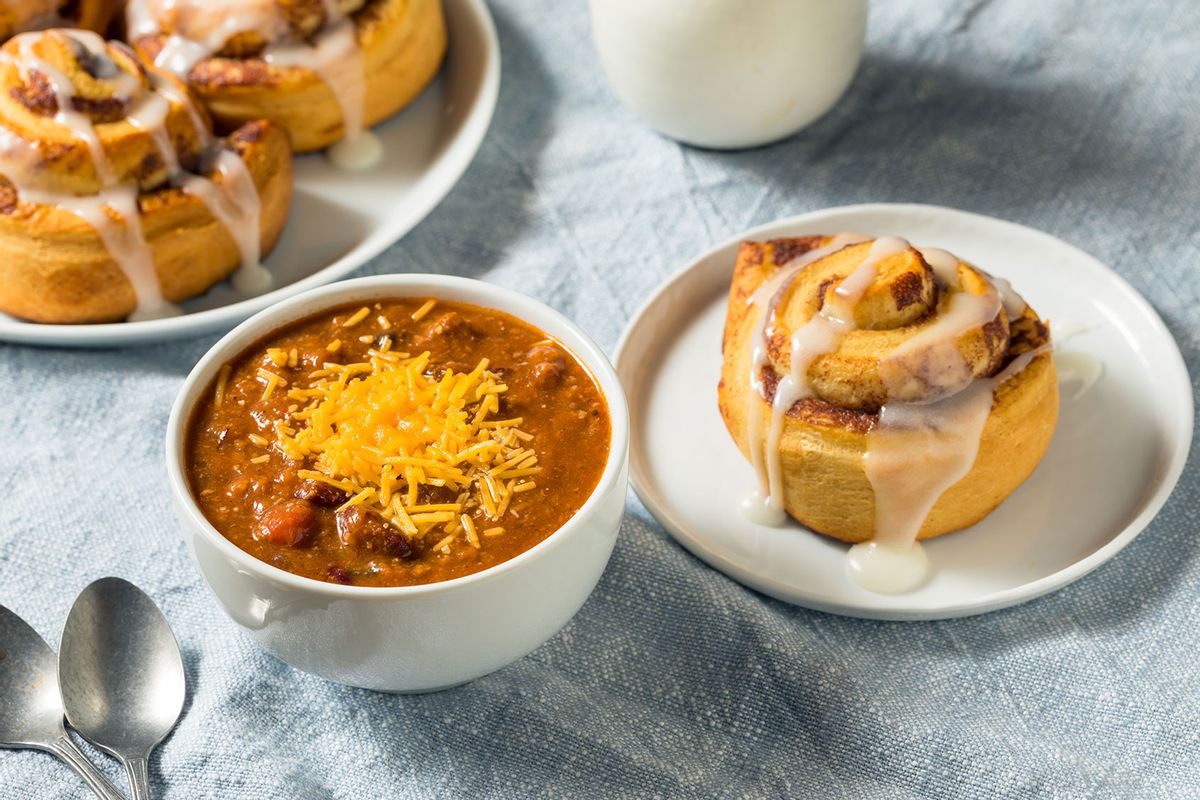 For $6.38, you can get a cup of chili, a medium Pepsi and a cinnamon roll from Runza, the Nebraska-based fast-food chain with 86 locations dotting its home state, Colorado, Iowa and Kansas. The brand's signature menu item is its namesake sandwich, the "Runza" — a yeasted bun filled with ground beef, cabbage and onions — but it acknowledges that its "Chili & Cinnamon Roll Meal" is a slightly more controversial regional delight.

Further east in Ohio, Cincinnati-style chili has many of the same ingredients as traditional red chili, such as cayenne, cumin and paprika. But it also skews sweeter with the addition of warm baking spices like allspice, nutmeg — and cinnamon.

This crispy, fried secret ingredient is the best way to upgrade homemade chili

Like bagels or pizza, chili is one of those foods that fosters rabid defenses of its regional variations. Should it have beans? Should the beef be ground or shredded? Should it be served with crackers, or in the case of Cincinnati again, spaghetti? Yet despite chili's inherent versatility, every year once the weather snaps cold, there seems to be renewed disbelief at the fact that a sizable swath of the U.S. prefers theirs served with cinnamon in some capacity.

So what's behind this Midwestern (and Mountain Western) pairing of sweetness and spice?

In the case of pairing cinnamon rolls with chili, it's a regional tradition that developed out of either logging camps or school cafeterias. Either way, the purpose was simple: to create a calorie-dense meal for cheap. As Laura Kiniry wrote for The Smithsonian, the combination found in school settings may have been a response to the establishment of the USDA National School Lunch Program in 1946.

"If you tell someone who's not from the Midwest that you like chili and cinnamon rolls together, they'll look at you like you have three heads."

"The United States Department of Agriculture (USDA) oversees the program nationally, though it's always been up to state agencies to determine what foods they'll be purchasing with the federal funds," Kiniry wrote. "However, purchases must adhere to the USDA's meal-pattern requirements, which includes a serving of milk, two servings of fruits and/or vegetables, a grain, and meat or a meat alternative per lunch for each student."

In rural farming communities, costs were tight and cafeteria workers were charged with stretching inexpensive ingredients like beans. "How do you make them appealing?" Kiniry wrote. "Toss them in a tomato sauce and pair them with something sweet."

By the 1960s, Kiniry reported, chili and cinnamon rolls were appearing on school cafeteria menus from Greeley, Colo., to Lake City, Iowa.

The origin of Cincinnati-style chili, meanwhile, has ties to Mediterranean cuisine. Tom and John Kiradjieff — brothers who were born in the town of Hrupishta, then in the Ottoman Empire, to Bulgarian parents — started a restaurant in the 1920s called The Empress Chili, named after the burlesque theater that was situated next to a hot dog stand they had previously run.

According to "The Authentic History of Cincinnati Chili," published in 2013 by Dann Woellert, the chili began as a "stew with traditional Mediterranean spices" that could be served on top of hot dogs. Tom Kiradjieff used the same sauce to modify a traditional dish — speculated to have been pastitsio, moussaka or saltsa kima — and "chili spaghetti" was born.

The success of Empress Chili led to other immigrants opening their own chili parlors, which served a variation of this spiced stew across the region, including enduring brands like Skyline Chili and Gold Star Chili.

"I think people recoil at the idea of cinnamon in a meat without realizing that it's common in many cuisines and reflects the backgrounds of the Greek and Macedonian immigrants who popularized it," Scott Hines, the author of the popular food newsletter The Action Cookbook Newsletter, told Salon Food. "It's not that different than Detroit-style coney sauce or things you see in Western New York. I grew up eating pastitsio and only recently realized how similar it is to Cincinnati chili, spice-wise."

This is one of the reasons that Cincinnati-style chili has found surprising success internationally — even if it hasn't necessarily enjoyed widespread critical popularity across the U.S. (The New York Times has described it as "watery," while Deadspin has called it "horrifying diarrhea sludge.") In 1985, one of the founders of Gold Star Chili, Fahid Daoud, returned to his home country of Jordan, where he opened his own chili parlor called Chili House. Outside of Jordan, there are Chili House locations in Iran, Iraq, Libya, Qatar, Oman, Palestine and Turkey.

Closer to home, however, the dish evokes deep nostalgia.

Lauren Mang is a University of Cincinnati alum who has lived in the city for nine years.

"Yes, cinnamon in chili sounds bizarre," she acknowledged in an email. "But it's such a nice departure from traditional in-your-face spicy chilis that everyone tends to make. It's not overly sweet — just rich and fragrant and always makes me think of Cincinnati in the fall."

And while the combination of spice and cinnamon may still seem counterintuitive, it's even managed to convert some chili enthusiasts from further west, such as Tony Aldaz.

"As a New Mexico native, I fancy my chili to be spicy," Aldaz told Salon Food via email. "My wife is from Cincinnati, and she introduced me to Cincinnati chili. The chili is sweet and spicy. The ingredients consist of cinnamon and chili powder. The chili is usually consumed on top of spaghetti with a chunk of cheese. It can also be used as a delicious dip. I make it at home in New Mexico at least once a week for my family, and we love it."

Even famed author Fran Lebowitz, who is known for her sardonic wit that occasionally borders on good-natured kvetching, declared herself a fan of the regional delicacy in an interview with The Cincinnati Enquirer.

When the interviewer, David Lyman, confirmed that Lebowitz actually liked it, she simply responded: "Oh, yes. Why isn't that catching on around the country?"

about our favorite comfort foods