The lesson of "Six Feet Under," 20 years later: "We're not really as in control as we all think"

Salon talks to Rachel Griffiths about how the HBO drama changed TV and how we think about life, then and now 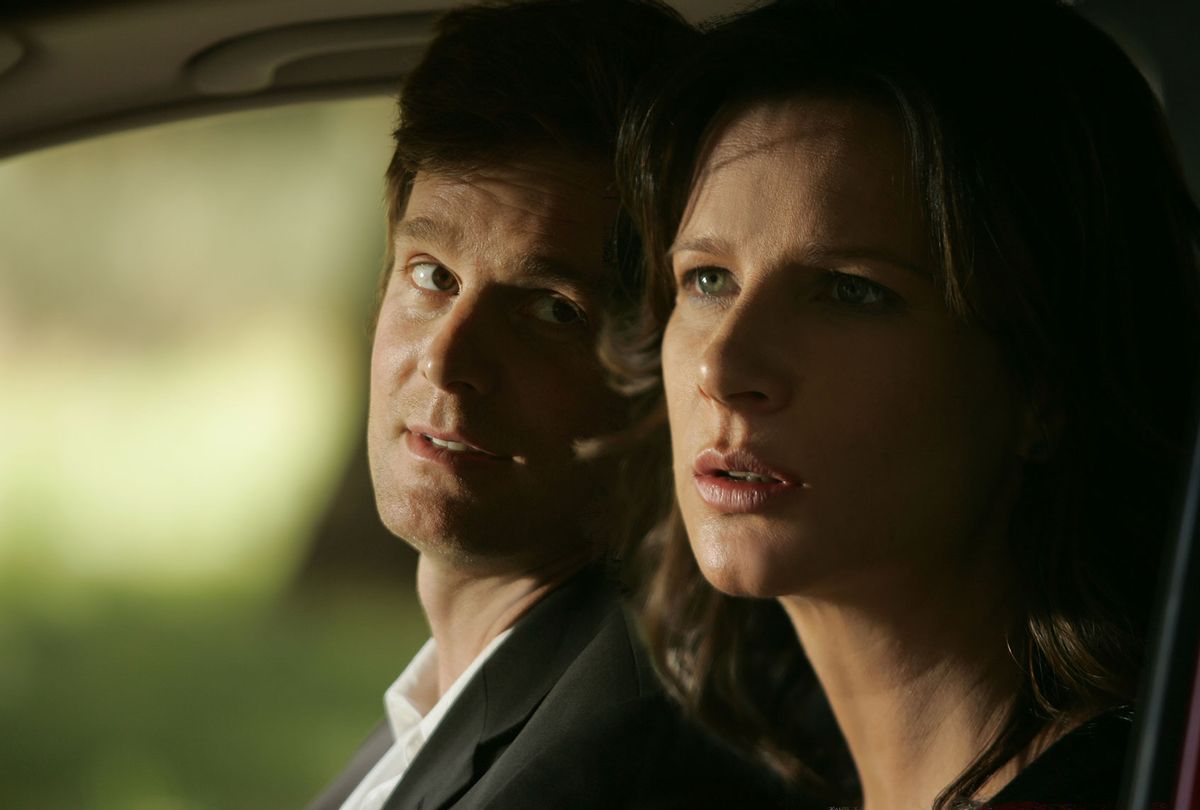 Twenty years after "Six Feet Under" premiered on HBO Rachel Griffiths hadn't read the obituary for her character Brenda Chenowith. She never knew one existed, actually, until I read a condensed version to her during a recent phone call.

"It says, 'Brenda Chenowith – '" I began, only to have Griffiths cut me off with a jokey stab at what came next, "'Achieved nothing? F**ked everything?'"

Happily Brenda lived a better life than Griffiths, speaking to Salon from Australia, expected of her. The short version is Brenda went on to earn her PhD and became one of the most distinguished scholars in her field, writing several books about a topic near and dear to her: the role of the gifted child in family development.

"What do you know?" the self-described overachiever said, her surprise adding an amused lilt to her voice. "Here I thought she was gonna wallow in that trust fund and in her existential despair for another 50 years."

It's easy to understand why the details of Brenda's later years might have escaped Griffiths if you've seen "Everyone's Waiting," hands down one of the best series finales ever made. For her and us, Brenda's story ended flawlessly in that 2005 episode with her slumping over as her brother Billy (Jeremy Sisto) talked her to death. One could say Brenda died as she lived, since she spent too much time putting up with Billy's logorrhea and bored easily.

Hers was one in a string of frames revealing how every major character in the show left this world, rendered in a dreamy seven-minute sequence. Where other shows exit in a fog of question marks or with the door cracked open enough to leave space for a return, "Six Feet Under" did not fade to black, but dissolved into peaceful white space and was gone. Two decades later we still love it for that reason.

When it debuted on June 3, 2001, series creator Alan Ball's notion of setting a family drama inside a funeral home was novel for several reasons, topmost among them being the death's constant presence in their lives. Mortality resides in the show not as mystery fodder or a device to amplify an antihero's complexity but as a simple fact of life. Frequently it was a random visitor, sometimes showing up in clown clothing.

"It was never a 'feel bad' show, and I think that's the kind of the miracle of Alan," Griffiths explained. "He does push towards the melodrama, right, push it towards the earnest, but ends on some devastatingly funny unexpected image or moment or line."

Season 1 also wrapped up prior to 9/11, a shock to America's system that reminded America's of life's unpredictability, which gave the show extra poignance watching it in hindsight.

"So many people came up to me then and said that they started watching 'Six Feet Under' or were re-watching the first season, and how differently it was landing then, " Griffiths recalled. "I feel like there was an obliviousness to how we were going about our business on Earth. I think we'd lost a degree of what one might call if it's not kind of spiritual thinking or theological reckoning with what we were doing here . . . perhaps a sense of vulnerability, economic and now in a pandemic, a very, very, very real reckoning with our human frailty."

"Of course, it was always there," she continued,  "but we seemed to have a long period of where we, I think, became somewhat separated from the central notion that we were in control. And I feel like Alan was making a show going, 'Hey, guys, we're not really as in control as we all think.' That really resonated for some people."

On the show, the Fishers lived in the rooms above their funeral parlor and mortuary, but taking in and sending off bodies never grew mundane. David (Michael C. Hall) takes over the running and management of Fisher & Sons Funeral Home when Nathaniel Fisher Sr. (Richard Jenkins) is killed in the pilot. David spends the years afterward forging his identity as a gay man, a partner to his boyfriend Keith (Mathew St. Patrick) and eventually a father.

Wife and mother Ruth Fisher (Frances Conroy) hastens down her path of self-actualization in the wake of losing her husband; youngest daughter Claire (Lauren Ambrose) wrestles with where she fits in the world as she contends with her grief. Nate Fisher (Peter Krause) is the prodigal son who ran away to Seattle and never intended to back, until family obligation forces him to.

Through the Fishers we also got to know resident restorative assistant Federico Diaz (Freddy Rodriguez) and his wife Vanessa (Justina Machado), whose story evolves and deepens alongside everyone else's.  And at the time, Federico and Vanessa represented a still-too-rare vision on TV, that of a Latin American family that was depicted as having parallel problems to everyone else, in the show and in the world.

"Six Feet Under" racked up nine Emmys over the course of its run and yet all these years later its presence tends to be muted in discussions about the Golden Age of Television that HBO is credited with ushering into reality.

Realizing that it was on the air at the same time and on the same network as "The Sopranos," "The Wire," "Deadwood" and on the comedy side of the spectrum, "Sex and the City," explains why that may be so.

In a medium that thrives on thematic imitation drawing lines to the overtly masculine themes of these dramas, and the defining femininity of "Sex and the City," is probably simpler than mapping the road of influence that begins at "Six Feet Under."

Wait, that's not quite it. Maybe in our minds we perceive the progeny of shows about difficult men to be more . . .  explosive. From the genetic pool originated by "The Sopranos," for example, leapt FX's "The Shield" and "Rescue Me" and later, AMC's "Breaking Bad."

But it is visibly present in shows such as "This Is Us," "Mad Men" and of course "Brothers and Sisters," Griffiths' next main cast role after putting Brenda to rest. The "Six Feet Under" writers' room, meanwhile, graduated creatives such as Joey Soloway, who went on to make the tonally and emotionally similar "Transparent."  Another, Craig Wright, created "Dirty Sexy Money" and the OWN drama "Greenleaf."

Every character enjoyed their cadre of supporters, but Brenda earned a special affection by inviting us along to witness her own tunnel-crawl through self-discovery. She meets Nate at the same time we do, exiting the plane where they enjoyed each other's company and screwing him in a utility closet minutes later.

It was supposed to be the briefest of flings, but that illicit interlude kicked off a cycle of attraction and repulsion lasting the entirety of the show's five seasons.

Griffiths also recalls being perplexed by Brenda given how little she has in common with her character. The actor has worked constantly since winning international acclaim in "Muriel's Wedding" and has several Emmy nominations under her belt along with an Oscar nod. Currently she's a series regular on Amazon's "The Wilds," which was recently picked up for a second season.

"It was always hard for me to just understand this girl's inability to get s**t done," she said. "I kept trying to find jobs for her where she could actually function in the world. To me, she just seemed like an anomaly. I didn't know many women in my life, young women, who were so talented and smart, and so trapped in their own neuroticism."

Now, Griffiths has more sympathy for this alter ego she once inhabited. She says she knows young people dealing with chronic anxiety and depression, who excel in school only to drift rudderless in their 20s. In that respect, she wonders if Brenda was a predictor or perhaps representative of a woman we hadn't yet seen.

Griffith explains that through her and the other women in on the show, Ball was breaking archetypes of what women are meant to look like or sound like. "You know, Nate's the guy and she's the girlfriend, and you use the girlfriend to explore different things about your main character," she said. "But with all Alan's women, he made them all 100% their own people who would intersect with other people. They were not subservient."

Griffiths then astutely and correctly observed that Jean Smart's "Mare of Easttown" character owes a debt to Ruth Fisher. Of course she does.

And it could be that we loved Brenda because she's the ultimate insider able to maintain some distance for most of the series, or because her family's dysfunction blended a form of ancient Greek tragedy with the exaggeration of an Aaron Spelling primetime soap. The Fishers may be quirky and difficult; the Chenowiths are borderline sociopaths. Brenda and her brother Billy were raised by mental health professionals who proudly allowed another psychiatrist to study Brenda, a kid with an I.Q. of 185, and write a book that would haunt her for the rest of her days.

Ball also wrote Brenda to be more likable than the other women Nate falls for in the series, mainly Lili Taylor's crunchy Lisa Kimmel, and  Tina Holmes' gentle and unexciting Maggie. And Brenda is but one example of the array of unique personalities Ball develops and complexifies over the four seasons "Six Feet Under" ran on HBO.

Through the Fishers, the Chenowiths and the array of people who passed through their lives, the show asked us to consider existential debates and conversations. There weren't many series on the air at that point that examined our culture's yearning for happiness and how that can differ from satisfaction, or played with the definitions of love and infidelity.

"Six Feet Under" concerned itself with issues beyond death, and we may have missed that the first time around because of the drama swirling around those larger questions. In 2021 we're still in a pandemic, and the world's shared mass grieving is ongoing. Sane and reasonable people would say they've had their fill of death and oddly enough, being in that headspace makes a person ripe for a re-watch.

It may be a series that kicked off with a major death, but it closes with a birth and that montage of endings, along with marriages, beautiful days and a cascade of life-affirming subplots. For all of us, Brenda included.

When asked what she imagined how Brenda would view our progression over the last 20 years – knowing what she knows now about her character, Griffiths was hopeful.

"From watching television, I think she would say, 'Thank Christ we are getting closer to actually far more accurate portrayals of what women feel like in themselves, and in their bodies, and what they struggle with and, and a more inclusive notion of what woman is, you know, including non-binary trends.' I think she would love this movement to self-definition," the actor said.

Thankfully "Six Feet Under" played a role in that.

All 63 episodes of "Six Feet Under" are streaming on HBO Max and can be purchased on digital and DVD.