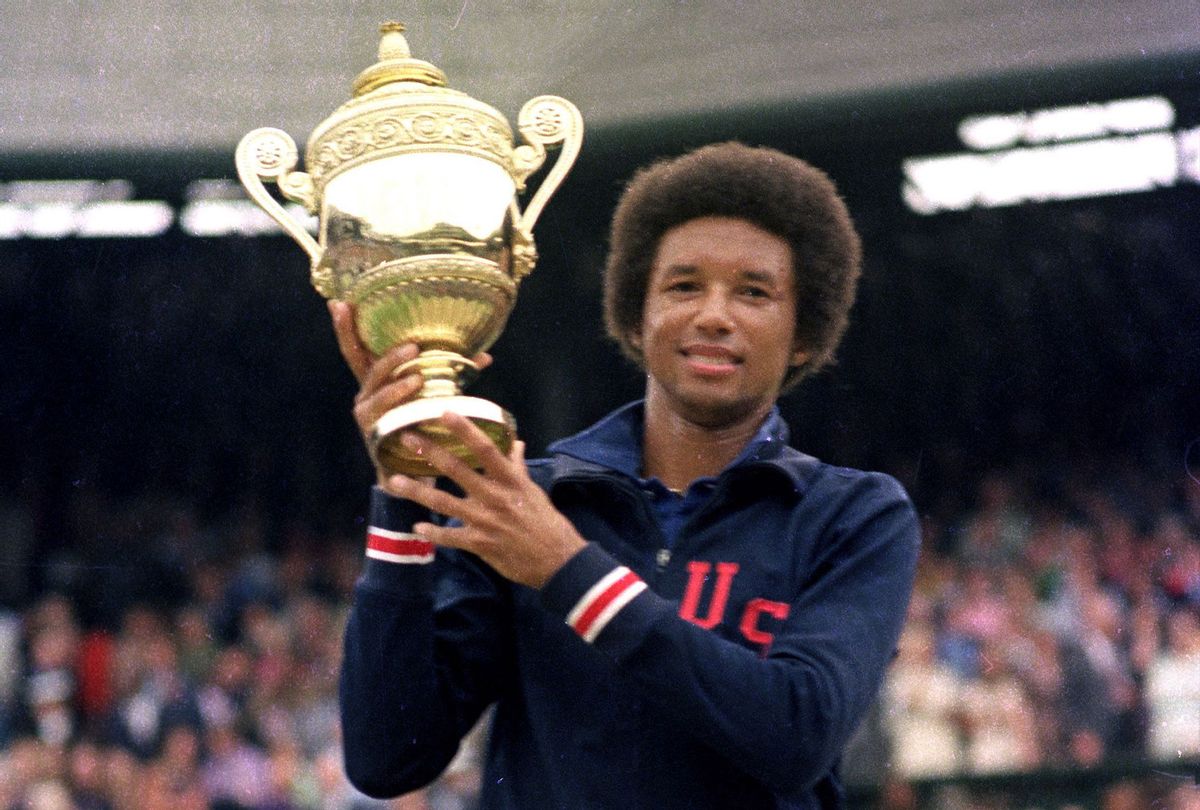 The inspiring new documentary, "Citizen Ashe" is as elegant and as agile as the tennis great it profiles. Directors Rex Miller and Sam Pollard focus largely on Arthur Ashe's evolving political consciousness, which the athlete developed over the course of his life and career. The approach is astute because Ashe's iconic status as the first Black man to succeed in the very white world of tennis not only captures the heroic/role model image of Black athletes, but it punctures the myth of Black athletes being "all brawn and no brains."

The film shows that Ashe was extremely savvy and calculated in his efforts, not just to be the "Jackie Robinson of tennis," but also to speak out against racism and inequality only after he won top prizes and earned respect. There were risks with Ashe doing things "his way," ranging from being called an "Uncle Tom" for not speaking out like other Black athletes — e.g., his contemporary Mohammad Ali — but also health issues from internalizing all of the pressure to achieve in the face of racism. Ashe's behavior throughout his career had to be above reproach; he did not want to be ejected or shame the family name.

"Citizen Ashe" presents a condensed version of Ashe's history. He grew up in Richmond, VA, literally on a Blacks-only playground in the late 1950s. (His disciplinarian father was a caretaker for the playground, so the family's house was there.) He took up tennis eventually getting mentored by Dr. Walter Johnson, who ran a development program (Johnson also coached Althea Gibson) that paved the way for Ashe's career.

But as he was playing in events like the Davis Cup (he was the first Black man to do so), Ashe was reluctant to assert his activist nature and felt cowardice for his behavior — not boycotting games or calling attention to racial discrimination. A montage seen early in the film shows various Black athletes speaking out — or deliberately keeping silent — effectively illustrating the tradition of protest in sports in general, and, more importantly, how these messages are not being fully heard.

Ashe eventually became a spokesperson for social change, and "Citizen Ashe" shows how he was especially motivated in 1968, the year Martin Luther King Jr. and Robert Kennedy were assassinated, which is also the year Ashe won the U.S. Open. There are interesting episodes in the film that recount Ashe's support of Kennedy, as well as Nelson Mandela. Ashe's protesting apartheid in South Africa complicated his efforts to play in Johannesburg; he was repeatedly denied a visa before being allowed to enter the country to play, and not talk politics.

The film includes plenty of footage of Ashe playing tennis, including the South African games, but the best sequence is his 1975 victory at Wimbledon against his rival Jimmy Connors. Ashe had never defeated Connors before this, and making matters worse, Connors filed a libel suit against Ashe in the days before their match. "Citizen Ashe" doesn't reveal that the suit was later dropped; however, the film does shows how Ashe, ever the consummate athlete, changed the way he played in order to beat Connors. It is truly thrilling to watch. What is more, hearing Ashe's brother Johnnie's emotional account of watching Arthur's achievement magnifies a noble sacrifice Johnnie described earlier that enabled Arthur, who was enlisted, to play tennis.

"Citizen Ashe" eventually shifts to its subject's third act, where he develops more sensitivity toward gender equality and meets his wife Jeanne. As he ages out of playing tennis, he coaches the Davis Cup team and 19-year-old John McEnroe. McEnroe's brash style clashes with Ashe's cool demeanor, but as Ashe observes, McEnroe had the "emotional freedom" to misbehave that was denied to him, a Black man. It is a very telling moment.

The documentary ends by addressing Ashe's health issues. He suffered a heart attack in his mid-30s, and developed toxoplasmosis, which lead to his AIDS diagnosis from a blood transfusion. Ashe was "forced to go public" with his status. But he championed AIDS awareness and was an activist for other causes, such as Haitian refugees.

"Citizen Ashe" may present a virtuous portrait of its subject, but the film shows Ashe was always a class act. What is more, his legacy continues. Tennis players including Coco Gauff and Venus and Serena Williams advocate for racial and social justice in sports and the world as do so many other athletes, including Colin Kaepernick, and LeBron James. Ashe's contributions to the sport, as recounted in this spry documentary, show how he left tennis better than it was when he started playing.

"Citizen Ashe" opens in select theaters in New York on Dec. 3, and in Los Angeles on Dec. 10.