Jonathan Rhys Meyers on being a bold boy playing amoral men: "Nobility can be a little bit tedious"

The acclaimed actor on his new film "Hide and Seek," being a gay icon & the movie Hallmark wouldn't want from him 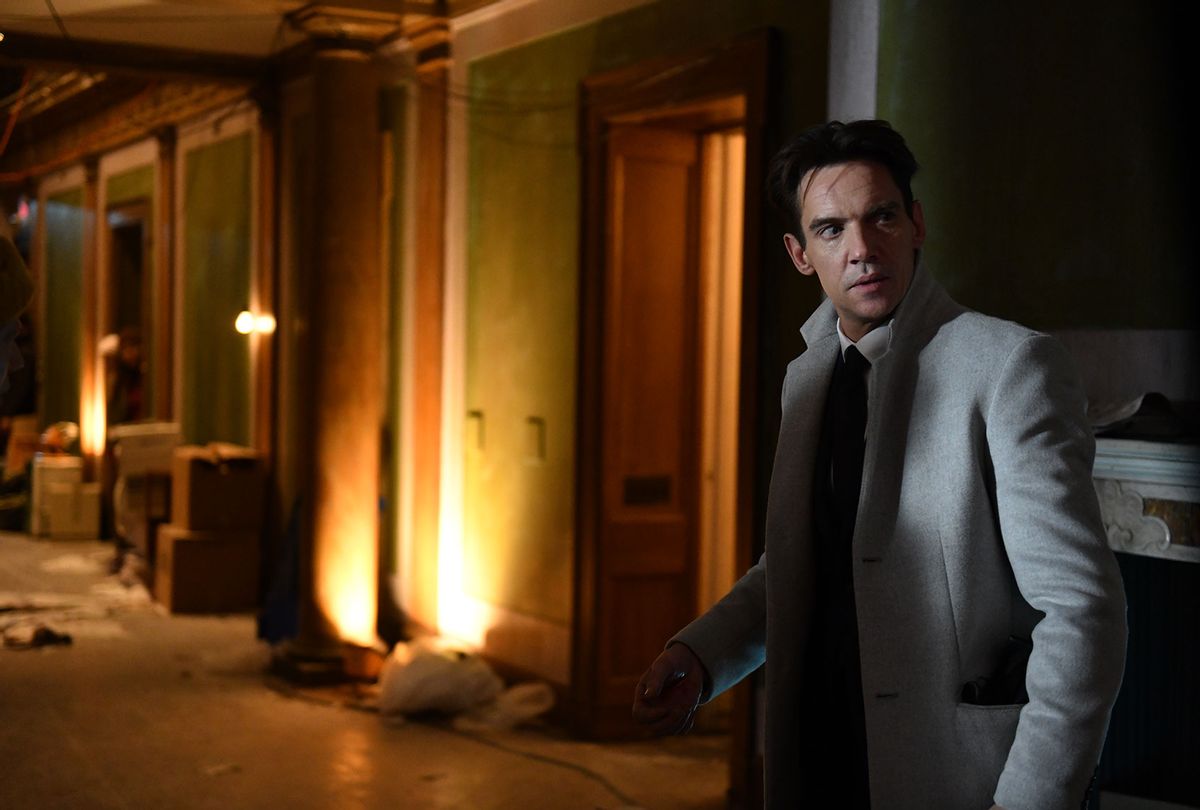 Jonathan Rhys Meyers is great at playing amoral characters. In his latest film, a stylish remake of the 2013 Korean film, "Hide and Seek," he plays Noah, a privileged businessman who searches for his estranged, missing brother in New York City. As he goes deeper down a rabbit hole — his search begins in a decrepit building he inherited from his father — the OCD Noah gets physically grimy. The actor makes this descent into hell credible, as Noah pieces together the puzzle of what is really going on but also questions his sanity.

The film is the busy Rhys Meyers' fifth feature to come out this year, following the terrific period drama, "Edge of the World," (as Sir James Brooke), and the neo-noir, "American Night," as well as the thrillers "Yakuza Princess," and "The Survivalist."

Rhys Meyers' seductive, leading-man looks have secured him key roles in films like Woody Allen's "Match Point," or title character in the series, "Dracula," while his appearances in "Velvet Goldmine," earned him a gay following. The actor may be best known for his work on TV, from his Golden Globe-wining and Emmy-nominated turn in "Elvis," and his Golden Globe-nominated work in series, "The Tudors," to his recent appearance in "Vikings." But Rhys Meyers continues to work in thrillers like "Hide and Seek" and "Damascus Cover" as well as period films like "Edge of the World" and "The Aspern Papers."

The actor chatted with Salon about his new film, his OCD and his career.

What are your thoughts on Noah's character, who tries to maintain control but loses it?

Noah is the prized son who is given everything, and his brother is not. He basically played up to his father's desires and what he wanted in a son. This is a commonality in a lot of wealthy families, where the father is an entrepreneur, who spends most of his time "at business." The kids are left to their own devices. If you are a smart kid, and you want to stay good with your dad, you become a reflection of your father. And if you want to rebel, you become the opposite. Noah is like every wealthy heir — there is an element of slippery with him. But inside, Noah knows he is not his father. He is not confident to run the family business in the same way his father did. He doesn't possess the same callous nature that is required.

You seem to excel as playing mischievous men, who are often amoral. Do you think you are typecast in these roles, or gravitate to playing them?

I kind of do. [Laughs] To an extent, as an actor, you are always typecast — for whatever reason. Your physicality will lend you to be typecast, regardless of what you do. Even character actors are typecast to be character actors. [Laughs] I don't think any human is completely moral or amoral. I think they are all both. Depending on the situation someone is presented with, they can act ethically or destructively. I kind of like that. It is more complex than a straight bad guy or good guy.

Yes, I like films where characters make a series of increasingly bad decisions, as Noah does, because we learn more about human nature. Heroes who are all virtuous and noble are boring.

There is no doubt about that. Nobility can be a little tedious. This is why the best character in "Star Wars" is Han Solo. He has a rough nobility about him, but it is laced with base alloy of mischievousness. That is required. You want your heroes to be heroes with a big streak of rake going through them. That is why Tony Stark in "Iron Man" is so successful. His heart is good, but there is all of this ego and duality, which is something the audience enjoys. A straight villain is boring, too! A villain must always be searching for some kind of redemption, and a hero must always be searching to hang up the good name and get a bit of street cred. [Laughs]

Noah is very OCD, scrubbing out a stain on his coat. This quality makes his descent into the grimy underground world all that more unsettling, especially as Noah is beaten up and covered in blood. Can you talk about getting dirty for your work?

I have [OCD] to an extent that I will go to someone's house for a visit, and I will clean their house while I talk to them. Just sit down, have some coffee, I'm just going to do a few things around here that bother me. [Laughs] I even clean my hotel room before I leave it. I enjoy cleaning. It's very therapeutic. If you feel things are getting too much, it brings a certain amount of "zazz." If you wipe down your counters, mop the floor, and fold everything, by the time you are finished, you have worked out if not the problem the human reaction. Because it's not the problem, but the reaction to the problem that gets you into trouble.

There is a game playing and codebreaking theme in the film with the signs on the door. Are you into puzzles?

No. I'm not very good at them. They dropped the trailer for "Hide and Seek," and people keep asking me, "Is this part of 'Squid Game'? And I was like, "What the f**k is 'Squid Game'?" I didn't know what it was. I do now. At the time I didn't. This film, which is the remake of a Korean film, was made pre-"Squid Game." All of the shapes that you see on the door are pre-"Squid Game," but I think some of the same people involved in "Squid Game" are involved in this.

The original Korean film ["Hide and Seek"] has far less dialogue. It is much more of an atmospheric movie. For the States, we decided to change that up and make it more of an interconnected family than make them isolated — even though Noah isolates himself from his family and the people that he meets. "Hide and Seek" asks, how do you become isolated in a city like New York? It's not that hard actually. When there are so many people living that close to each other in a city where survival of fittest is a predominant theme, it is very easy to be alone. This is what Noah does, he starts with his family and descends into unit of one.

"Hide and Seek," like your other recent film, "American Night," can be seen as kind of a neo-noir. What appeals to you about the genre?  You do convince as a noir antihero and playing privileged tough guys, which is far removed from your period films.

I suppose I [tend] to playing an antihero, and in these morality pieces. I don't choose the work; I get the work I get. Actors do the work we are offered. There are things that I would like to do that I don't get. It's not for me to judge if I'm good at playing a part. It is up to the audience whether they enjoy seeing you in the role or not, or whether the director is in love with you for the role and treats you properly. I have spent 30 years making films but actually I am appearing in other people's films. As a specialty film actor, you are working, but not necessary in your format. Filmmaking is a director's format. You are the paint in a painting. You are on the screen and depending on how good the painter is depends on how many people look at it. Perhaps stage may be more of an actor's medium. Once you do the work, the director is gone, and you are left playing for weeks and weeks. It is very much in the hands of the actors.

You have worked with some amazing talent over the years, from Woody Allen and Oliver Stone to Mira Nair and Julie Taymor, to Todd Haynes, Ang Lee, and Neil Jordan. Now you are collaborating with your wife, Mara Lane, and producing things together. What observations do you have about your career?

It's partially age. My wife was in "American Night." It's fun working with her because I get to have my wife and son, which is very important. I haven't decided yet whether I want to do the other thing, which is take a piece I want to make, and make it. Even though I have appeared in other people's films, I haven't made my own. What I would like to make couldn't get released [Laughs]. I've been around it so long, so I've observed it going well and going horribly. I've had far more failure than success, and it is a great teacher. What film would I like to make? I'd like to make "Blood Meridian," but people are like, "You can't make that today. No one will put the dough up for that movie." [Laughs]. I will always lend myself to the dark, complicated than for the straight up, let's have a giggle. That's not to say I wouldn't do a rom-com, of course I would, but I'd never decide that that's what I want to do.

Christmas movies are the new rom-coms. They have a formula and non-threatening boys.

On that note, you have been a gay icon since your appearance in "Velvet Goldmine." What does this status mean to you?

Period films put you in that [status] because it's fabulous. "Velvet Goldmine" deals with glam rock. I suppose bold boys [laughs] tend to be good gay icons. "He's a rake, but I can change him." I don't know. I lent myself to that androgynous vibe in my late teens/early 20s. I didn't mind it. I'm European, so I don't have a problem with it. I grew up in a very staunch Catholic country, but not in a super religious environment. I lent myself to being able to play with it. I was confident in where I was. When you are immediately at ease in that world, you are more comfortable can play with it. And "Velvet Goldmine" was pretty f**king camp. Todd Haynes is a great artist.

You seem to be making more independent films now. Is that by design?

That's just the way it is. Your director is most important thing, so I would choose to work for a great director over a not great director, but it depends on if they want to work with me. I'm doing independent films now because it's very hard at this moment for people to put a lot of money into films. They can very easily put a lot of money into television, because it's easier to get it back. It's not as easy to get money back for films now. I very much enjoyed making "Edge of the World" with Michael Haussman. We set out to do something with that. I was super proud of what we achieved. And I was proud of "The 12th Man," which I made with Harald Zwart. Those were my more recent passion projects.

"Hide and Seek" is in theaters Friday, Nov. 19. Watch a trailer for it below via YouTube.