The television quack is too awful even for American politics 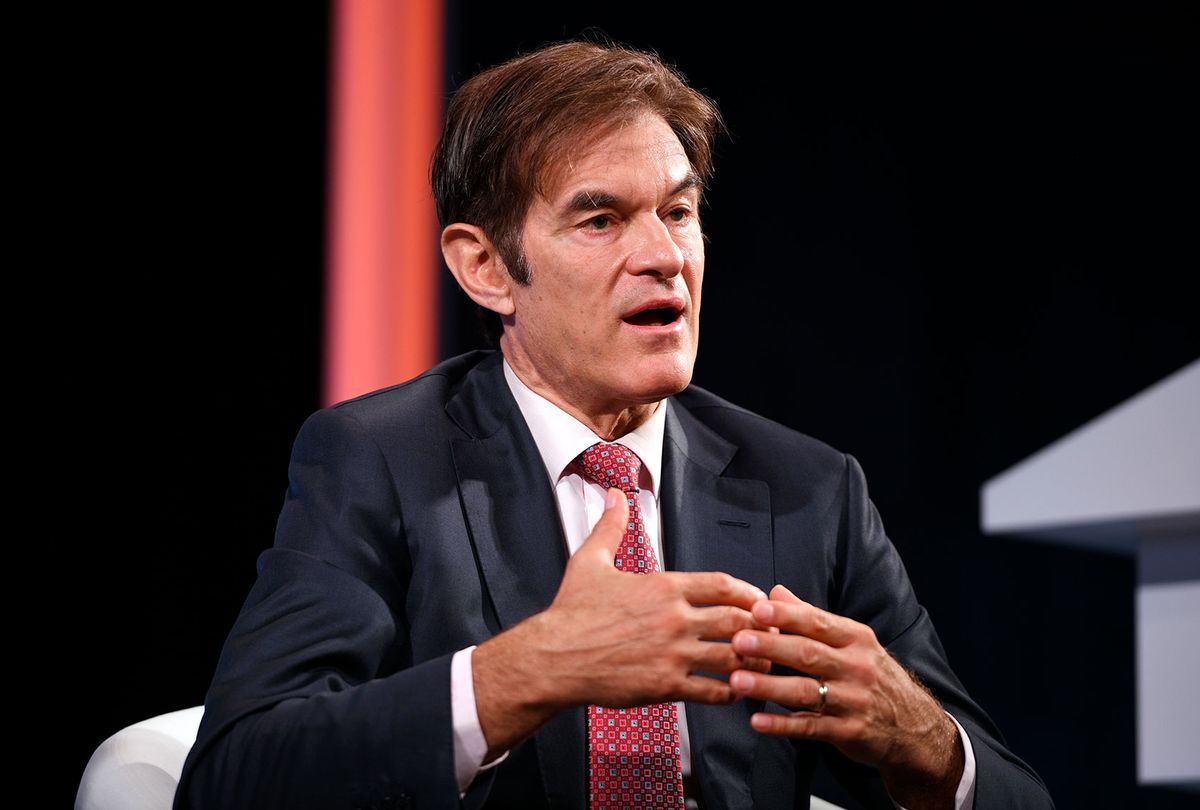 I just can't shake the fear that one day in the not-so-distant future we'll be living under a GOOP administration. It seems weirdly possible, now that physician, erstwhile "Jeopardy!" host and world's biggest fan of unproven medical "miracles" Dr. Mehmet Oz is running for U.S. Senate in Pennsylvania.

Oz, who is running as a Republican, threw his hat in the ring this month after Trump-endorsed candidate Sean Parnell withdrew in the wake of domestic abuse allegations. In his announcement, Oz struck his trademark authoritative tone, writing in the Washington Examiner:

During the pandemic, I learned that when you mix politics and medicine, you get politics instead of solutions. That's why I am running for the U.S. Senate: to help fix the problems and to help us heal. COVID-19 became an excuse for the government and elite thinkers who controlled the means of communication to suspend debate. Dissenting opinions from leading scholars were ridiculed and canceled so their ideas could not be disseminated…. Elites with yards told those without yards to stay inside, and the arrogant, closed-minded people in charge closed our parks, shuttered our schools, shut down our businesses, and took away our freedom.

In his accompanying video statement, he echoed this sentiment, saying, "Washington got it wrong. They took away our freedom without making us safer." And in a move that can only be interpreted as shameless endorsement thirst, he also noted the pandemic's "moments of brilliance, such as the gift to the world of mRNA vaccines made possible by President Donald Trump's Operation Warp Speed."

If it seems strange for a doctor who thinks that mixing medicine and politics is a bad idea would suggest that the solution is for him to run for office, that's the exactly kind of contradiction that has made Mehmet Oz a star. From his earliest breakout stardom as one of Oprah's "experts," to his lengthly run on his eponymous daytime show, he has parlayed folksy charisma into dubious credibility. Oz, after all, has Ivy League cred up the wazoo — educated at Harvard and the University of Pennsylvania, residency and career at Columbia — yet positions himself as an advocate against "elite thinkers" (with yards!). He never lets you forget he's a man of medicine, the director of Columbia Surgery's Integrative Medicine Center, all while gently suggesting that you, average person, are the real expert here. In other words, he's a perfect representation of the overconfidence that characterizes our age of misinformation.

RELATED: Dr. Oz's MAGA campaign: He wants to get "tough on China" — but his products are made there

He's also a classic American success story of failing upward. Long ago, he was, perhaps, just another very smart doctor practicing at a very good hospital. He was even my father-in-law's heart surgeon back when he was still better known for his cardiac work than as one of People magazine's sexiest men alive. But over the years — at least in many legitimate medical circles — Oz's celebrity began to eclipse his credibility. Yet with every controversy, every challenge to his incredibly dubious claims, he seems to become more influential.

In 2012, Oz opened up his show to a "debate" on conversion therapy, asking, "Is there a gay cure?" and welcoming an "expert" from the National Association for Research and Therapy of Homosexuality (now known as The Alliance for Therapeutic Choice and Scientific Integrity). He has in the past also given a platform to quackadoo extraordinaire Joseph Mercola, disagreeing with some of his ideas but praising his penchant for "defying convention and thinking largely outside the box." He has in the past said he's "rethinking tanning beds" after considering "a value of UVB radiation, not just for vitamin D but for other sources as well." Interestingly enough, the show's "gay cure" and Mercola content appear to have been quietly scrubbed from its site, just like the notorious episode on the "miracle" green coffee bean diet. (The "miracle" was based on a study the authors later had to retract. "Dr Oz" guest Lindsey Duncan later agreed to pay $9 milliion to consumers over false weight loss claims.)

His hyperbolic affinity for miracle cures and "the key to feeling decades younger" have landed him, repeatedly, in serious ethical trouble. In 2011, he was called out by the Food and Drug Administration after he claimed that five popular brands of apple juice contained arsenic. In 2014, he appeared before Claire McCaskill, chairwoman of the Senate Commerce Subcommittee on Consumer Protection, who told him, "People want to believe they can take an itty-bitty pill to push fat out of their body. I know you know how much power you have. I know you know that." In 2015, ten of his peers — physicians, surgeons and professors — sent a letter to the dean of medicine at Columbia University expressing how they were "surprised and dismayed that Columbia University's College of Physicians and Surgeons would permit Dr. Mehmet Oz to occupy a faculty appointment, let alone a senior administrative position in the Department of Surgery," asserting that Dr. Oz "has repeatedly shown disdain for science and for evidence-based medicine, as well as baseless and relentless opposition to the genetic engineering of food crops. Worst of all, he has manifested an egregious lack of integrity by promoting quack treatments and cures in the interest of personal financial gain."

Yet Mehmet Oz never stops, never slows down. He may sometimes have to stop touting one particular piece of questionable information, but there's always plenty more where that came from. To that end, the pandemic has been a real jackpot for him — he's been a vocal promotor of a "self-reported" hydroxychloroquine clinical trial, and in 2020 shocked viewers when he said on Fox that if "the opening of schools may only cost us 2 to 3 percent in terms of total mortality… it might be a trade-off some folks would consider." (He later claimed he simply "misspoke.")

His role as the darling of the conservative, medical freedom-fighting movement was carved out for him back in 2018, when Donald Trump gave him an appointment on the President's Council on Sports, Fitness & Nutrition. But it's one thing to have a standing invitation on Fox News, it's another to actually get elected to political office. And while America has never lacked for physicians in government — or physicians pretty much unqualified for public service — Oz may find himself caught between an ideological rock and hard place now that he will have to answer to voters on his seemingly very fluid beliefs.

In a recent interview for WGAL News, Oz, whose campaign site says "he has literally held a beating heart in his hands. He knows how precious life is and is 100% Pro-Life," qualified his position by saying, "I'm pro-life, with the three usual exceptions, especially the health of the mother, but incest and rape as well." In 2019, he was even more expansive, talking to the Breakfast Club about Alabama's abortion restrictions and saying, "I'm really worried about it… It's two weeks past your last period you'd have to decide by.... This whole thing about heart beating. There are electrical changes at six weeks, but the heart's not beating."

It's a similar story on gun rights. Oz calls himself "a firm believer in the Second Amendment and our constitutional right to bear arms for protection," yet has in the past had guests on his show discuss "Red Flag" laws and had fellow doctors talk openly about the "public health crisis" of gun violence. He claims he's "tough on China," but his merch is made there.

Dr. Oz has, for a very long time, been a source of exasperated fury for multitudes of Americans who care about things like medical ethics and public safety. But it's those moments in his career when he has spoken as someone who understands at least a little about science and humanity that may prove his political Achilles heel. You can't just delete your former statements from the public record. And all voters, regardless of their ideologies, deserve candidates who are honest about their positions — not to mention where they actually live. But Oz, a man noted by his own fellow doctors for his "egregious lack of integrity," has long reveled in his broad appeal, of being an icon to the yoga moms and MAGA hats alike. Now he has to decide, it not who he truly is, who he wants voters to believe he is. And while there is no shortage of charlatans succeeding in politics, "America's doctor" may soon discover that's good enough to be Pennsylvania's senator.