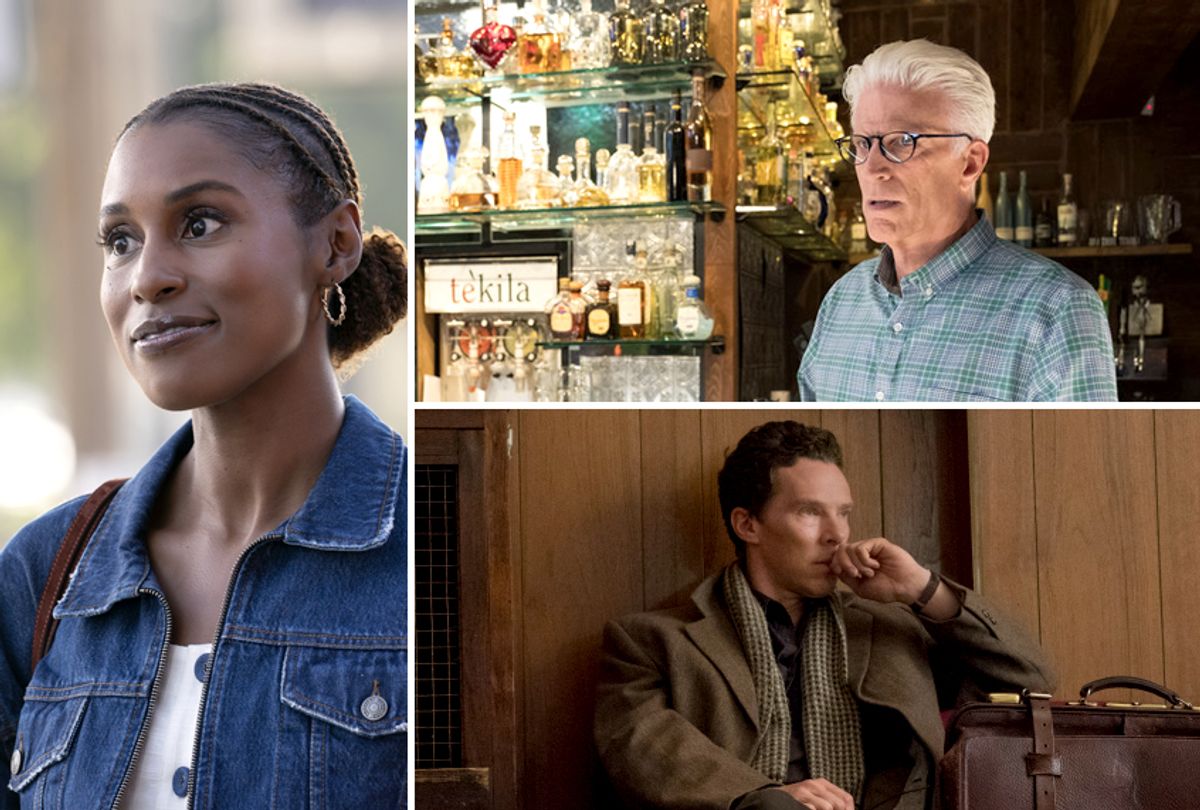 Ninety days from now, when the wind feels sharper and the skies fade from cerulean to slate grey, you may regret not having cavorted in the sunshine on Labor Day Weekend.

But who can say? All we have is today. And on this day, perhaps all you can think about is how tired you are. That fatigue has soaked in to your marrow. Maybe all you want to do is park it on the couch, or in the hammock, or your bed, and dive into hours of TV episodes, moving only to answer nature’s call or hit the fridge.

That is your right! It’s Labor Day, the national holiday devoted to celebrating the working person’s right to do absolutely nothing.

That said, one’s day-off TV binge doesn’t have to be a time waster. Given the sheer volume of television content out there, it’s impossible to have watched some or even one episode of everything. There are a lot of shows, and not all of it is worth it.

Not even every Emmy nominated series is worth subjecting yourself to. That said, the Emmys are coming up soon — on Monday, September 17 — so if there were ever a time to catch up on a few nominated series you’ve been meaning to drink in, this three-day weekend is a great time to do it.

With that in mind, here are our suggestions for the top Emmy nominated series or performances worth binging. A few quick points: One, in calling attention to some series and performances over others, I am not suggesting these specific titles or performers will win or should win. Just that they’re worth watching. Others that I suggest aren’t worth your time may end up with Emmy hardware at the end of the night. The awards deities are capricious like that!

Just as likely, if I don’t expend space writing up shows you’ve likely already seen, that doesn’t mean they’re not good. The average Salon reader doesn’t need to be talked into watching “Game of Thrones,” for example. Also for the sake of maintaining one’s day-off mood, you should steer clear of “The Handmaid’s Tale.” It’s still awards bait, no question.

But save it and other drive-by choices for another time. Winter is coming, after all.  If you’re going to stay out of the sunshine, do it for one of these worthy diversions.

“Barry,” HBO. (Available on HBO Now and HBO Go.) Weird, inky black, funny in all the right ways and devastating in the end, Bill Hader’s dark comedy is one of the freshest offerings on TV this year and leaves no doubts as to his versatility. But the reason to binge this is co-star Henry Winkler’s vivacious drama tutor Gene Cousineau, who clinched a nod in the supporting actor in a comedy category.

“The Marvelous Mrs. Maisel,” Amazon. Streaming now on Amazon Prime. Although the first season’s plot arc accidentally became emblematic of #MeToo, with its story of Midge Maisel’s transformation from supportive housewife to comedic force, its brightness and humor defy the righteous anger of the moment. Credit for that is due to Dan and Amy Sherman Palladino’s writing but more than this, to the glow and crackle of Rachel Brosnahan’s whip-smart delivery and singularly assured onscreen presence.

“The Americans,” FX. Available on the FX Now app or using the FX+ add-on. When most top dramas end (not all, but most) sending them out with a slew of nominations and awards is customary (although not always). Emmy ignored this series in major categories for the first three seasons of its six-season run; besides granting it a drama nod this year, it earned one in 2016.

While “The Americans” is a stellar series through and through, the performances, helmed by Keri Russell and Matthew Rhys, put the finale season into the realm of the year’s best series – not to mention among the best shows of this decade.

Honorable mention: “Westworld,” HBO. (HBO Now and HBO Go) Yeah, you probably watched this. Even more likely, you may have stopped watching it. But if you have watched it, this weekend is a great time to watch it again and notice the visual cues that we may have overlooked on the first pass.

You’re probably already watching these, but also bingeworthy: “Stranger Things” and “The Crown,” Netflix; “This Is Us,” NBC (Hulu)

Do you really need to watch this again?: “Game of Thrones,” HBO

“Patrick Melrose,” Showtime (Showtime Anytime). A limited series that begins with one of the most dizzying excursions into drug-induced madness soon calms and transforms into a damning, heartbreaking examination of abuse, recovery and the quiet endeavor to stay straight in a twisted world. At the center of it, Benedict Cumberbatch leads the viewer through the different and divergent stages of the title character’s life, invigorating Edward St. Aubyn’s lacerating prose with a sense of endurance and empathy. With only five parts to watch, this series is an agile binge, and not necessarily an easy one, but certainly worthwhile

Outstanding Lead Actor in a Limited Series or Movie

Jesse Plemons, “Black Mirror: USS Callister,” Netflix. In a break from its usual modus operandi, this episode consciously leaned into overt classic sci-fi to tell a story of incel rage from two perspectives, starting with Plemons’ seething perpetrator before transitioning midstream to Nanette (Cristin Milioti), his unrequited crush who he seeks to control by removing her agency, and her genitals, in the virtual reality where he traps his co-workers. While it’s longer than most “Black Mirror” episodes, it’s still a very digestible 76 minutes and includes the satisfying moment of Nanette screaming, “Stealing my pussy is a red f**king line!”

John Legend, “Jesus Christ Superstar Live in Concert,” NBC (Hulu). Everything about this telecast is incredible, from the sets to the fashion-forward costuming, but Legend is, well, something beyond divine here. If he scores an Emmy, he’ll enter the rare ranking of getting an EGOT. Surely you’ll want to understand why he deserves it if that happens, or be righteously indignant if it doesn't.

Ted Danson, “The Good Place,” NBC (Hulu). If you enjoy happiness, laughter and ethical quandaries, then you’re already watching this one. And if that’s the case, watch it again with an eye on Danson, whose demon-in-an-angel’s disguise Michael smoothly vacillates between impish evil and wide-eyed innocence. When he’s bad, he’s really, really good; but no matter his moral alignment, few actors are more watchable.

Anthony Anderson, “Black-ish,” ABC (Hulu). Throughout the series, Anderson’s Dre has played the know-it-all dad who ends up learning important lessons about how the world works from his wife Bow (Tracee Ellis Ross, also nominated) and his kids. But this season, when Dre and Bow’s marriage drifts apart, Anderson has a chance to explore different emotional tones than we’re used to seeing on this show.

Ed Harris, Jeffrey Wright, “Westworld,” HBO (HBO Go and HBO Now). For the reasons cited in the above write up, these two characters, and the actors playing them, danced through dramatic subtleties and shifts in their characters that one may best appreciate during a re-watch. Wright, in particular, is terrific in season 2.

Matthew Rhys, “The Americans,” FX (FX Now app or FX Plus). See the above write-up.

You’re already watching this show, but marvel at the splendid performances of: Sterling K. Brown and Milo Ventimiglia in  “This Is Us,” NBC (Hulu). Brown is a favorite to repeat in this category, and Ventimiglia made a nation weep when we found out that he was killed by a bum crockpot.

Outstanding Lead Actress in a Limited Series or Movie

Regina King, “Seven Seconds,” Netflix. King is a frequent flyer in awards nominations categories for good reason, and that’s certainly clear in this series, where she plays a mother fighting tooth and claw to get justice for her son, who’s hit-and-run manslaughter by the cops is covered up by his brothers in blue. King’s anguish slices like a knife, but amazingly, this series is far more gripping than depressing.

How much do you enjoy screaming? Sarah Paulson, “American Horror Story: Cult” (FX Now app or FX Plus)

Pamela Adlon, “Better Things,” FX (FX Now app or FX Plus). Over the past two seasons of this series, Adlon’s performance has become more muscular and satisfying, even in the quiet moments, of which there are many. Few series capture the wonder, worry and strength of being a grown woman in 2018 as well as this one. Adlon deserves credit for making this so.

Issa Rae, “Insecure,” HBO (HBO Now and HBO Go). Rae’s Issa can be selfish, unwise and aggravating at times, but the actress and creator always makes her the kind of person viewers don’t merely relate to but want to have in their lives. It’s hard to think of better ways to spend a three-day weekend than catching up on her exploits with Molly and their other friends.

Sandra Oh, “Killing Eve,” BBC America. Honestly, if you haven’t succumbed to the seductive wiles of this series by now, I’m not sure there’s hope for you. There’s still time, of course, and once you’ve enjoyed Oh’s frazzled, funny and dogged intelligence agent in the first episode, you’ll be hooked. At the moment, “Killing Eve” is only available for purchase on iTunes and Amazon, but trust us and buy the entire season. As ferociously as it begins, the ending will simply floor you . . . and leave you wondering why Emmy snubbed it in the Outstanding Drama category.

Keri Russell, “The Americans,” FX (FX Now app or FX Plus).  See the above write-up.