"They don't like him as a person, so what they have to do is deny that he's done anything at all good for America" 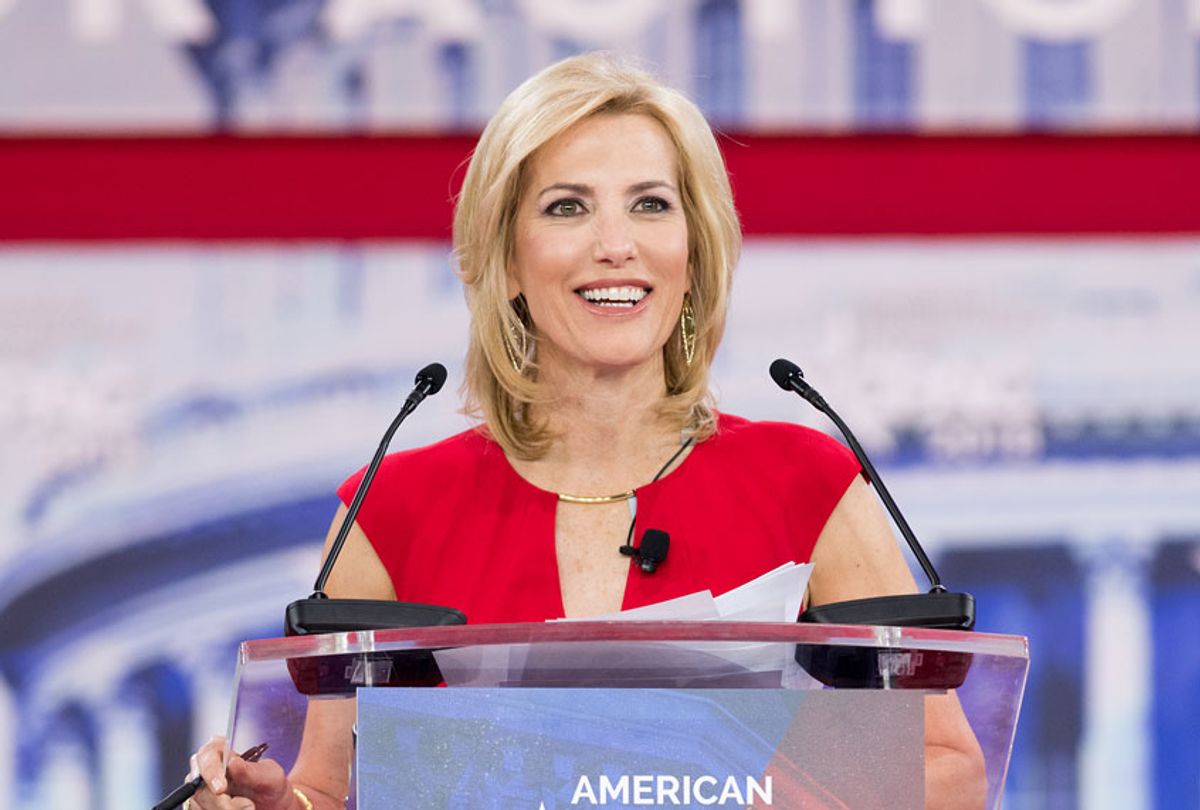 Fox News host Laura Ingraham — who has been called a "white supremacist" by Rep. Joaquin Castro, D-Texas; a "Neo-Nazi fan favorite" by Rep. Alexandria Ocasio-Cortez, D-N.Y.; and a "racist" and a "monster" by her own brother — told her viewers this week that Democrats who call President Donald Trump have "zero evidence."

"Their next trick is to launch a desperate campaign to cast President Trump, though, as the villain who threatens us all. They don't like him as a person, so what they have to do is deny that he's done anything at all good for America," Ingraham claimed on Tuesday. "And, of course, they need to call him 'racist' with zero evidence."

Ingraham then played a choppy edit of Rep. Jim Cyburn, D-S.C., responding to questions from her Fox News colleague Brett Baier earlier that day about Trump's record on race relations.

"But you're not giving the Trump administration any credit for the things Tim Scott has said it should get credit for," Baier said, referencing the lone Black Republican senator.

"Absolutely not," Clyburn responded. "I'm not, because he doesn't deserve it."

Ingraham, who appeared to give the Nazi salute when she endorsed Trump at the 2016 Republican National Convention, commented: "But again, pay no attention to Trump's actual accomplishments — the outcomes. None of it — just ignore it all. Instead, stick with this twisted fantasy that President Trump is really, in his heart of hearts, wants to work against people of color."

But there is ample evidence that the president is, in fact, an inveterate racist who consciously enables racists, racist ideology and racist violence.

Ingraham's claim of "no evidence" is itself a trope commonly repeated by conservatives.

The Fox News host then played a clip of Ja'Ron Smith, one of Trump's Black campaign surrogates who criticized Democrats for playing the race card, before turning to the president herself.

"You could tell today in watching President Trump that he was extremely moved today in meeting with the families of men killed by the police," she claimed.

Those victims were not all men. But they were all black, which Ingraham — who, again, has been called a "racist" by her own brother — neglected to mention.

Ingraham played an excerpt of Trump reading his speech on police reform from a TelePrompTer surrounded by law enforcement officials in the Rose Garden. The president told the same families — who, following a "contentious" White House meeting, did not attend the Rose Garden speech — that he "cannot imagine your pain or the depth of your anguish."

Trump then signed an executive order partially banning chokeholds and incentivizing police departments to do a better job training their forces.

Ingraham juxtaposed the speech with a TV interview of one of the family members, who said that the president had been "very compassionate" and showed "amazing concern" in the private conference.

"It was really good for President Trump to meet with those families," Ingraham told her mostly white audience.

"And, by the way, no camera in the room," she added. "Just a chance to listen to them."

Though the families did not attend the Rose Garden event, Trump did parade uniformed law enforcement representatives in front of the cameras at the signing. They surrounded the president as he put pen to paper.

"I think we sometimes forget in the bitterness of today's politics, and I'm sure I'm guilty here," Ingraham, who has mocked teenage climate activist and Time "Person of the Year" Greta Thunberg on more than once occasion, said.

The Fox News host then concluded: "We're all human."

"President Trump should be judged by his commitments, and his actions and his results that he's delivering to all Americans, especially the most disadvantaged," Ingraham, who once said that the cages, cells and holding centers that hosted migrant children during Trump's family separation policy at the southern border were like "summer camps," asserted.

"So there's only so much of the love you can spread around when your own family, an American citizen or an American veteran on a street is having trouble," she said.