Calling out the saddest sacks of 2021, a reckoning by Nicki Minaj's cousin's friend's ... friends

Before the ball drops on 2021, a tasty listicle of those who lacked the bollocks to listen to science or sense 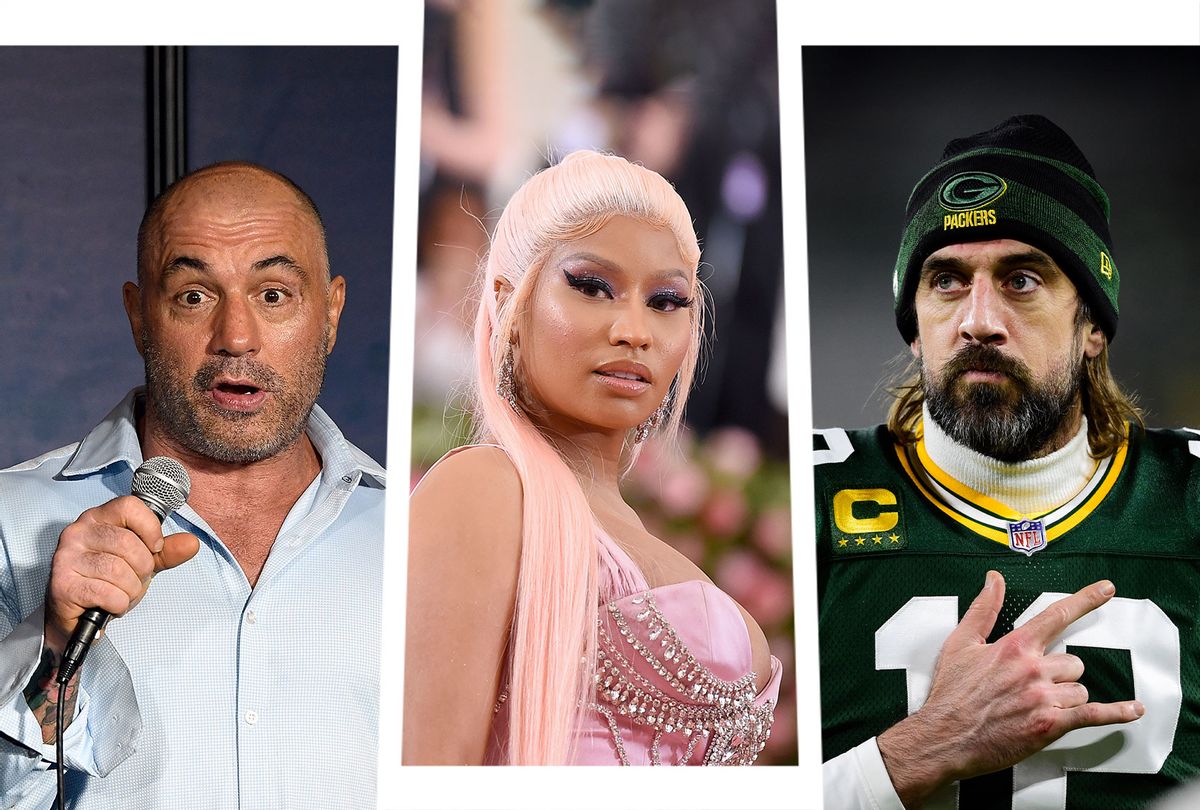 How's it hanging? Me, I've been dragging since September.That's the way 2021 has rolled for all of us – we swung into it with great expectations only to leave it shriveled and deflated, like the saddest pair of raisins you ever saw.

Nobody could escape this feeling – not even me, and I'm an absolute recluse. Despite spending most of my life tucked out of sight –  a Trinidadian Thomas Pynchon of the pants, I am intentionally difficult to track down – my friend's famous cousin took it upon herself to blow me up. Maybe you recall this diva Nicki Minaj churning up some noise back in September about me gettin' swole in a bad way, as an excuse to refuse The Met Gala's vaccination requirement.

Typical. Everybody loves to claim their under-brain is the seat of all their misfortunes instead of examining the one between their ears. You'd think I'd be used to that, but remembering the whole affair pains me even now. What can I say? I'm sensitive.

Realizing that my story is but one entry on 2021's extensive list of celebrity inanity restored my fortitude. Thus, I decided to slide out of my cotton cave to air out four more examples of famous people bollocksing things up on the pandemic and social progress fronts, either for themselves or for all of us, in the hopes that a short end-of-2021 listicle written by testicles will amuse you.

After you have read these stories of great misfortunes and greater stupidity, perhaps you will accuse me of wild exaggeration and flights of fancy. But rest assured, the tragedies listed here are not fiction.* All of it happened, or continues to happen. All of it was easily avoidable.

Hollywood is awash in conservatives, and kooks, and conservative kooks. Some we know about, but many we don't hear from because they're smart enough to hire a publicity machine that keeps their conkers under wraps. Not so with Carano, a rising action star before she landed the plum role of former Rebel trooper Cara Dune in "The Mandalorian."

Fans loved Cara Dune, positioning Carano to score her own series in the expanding "Star Wars" universe. Then people checked out her social media feed and, well, that changed. A wise man* once said "the stupidest man will often, under the stress of passion, achieve heights of eloquence, in thought if not in language, and seem to move in some luminous sphere."

Carano . . . did not do that. In February she likened her plight as a non-mask wearing Trumplican to being Jewish in Nazi Germany, on top of previous transphobic, anti-Black Lives Matter and anti-masking posts. The last antisemitic straw marked the end of her "Star Wars" story.

Meghan McCain's departure from "The View" made the social mediaphere tumescent with joy last fall, but let's not forget what happened to Sharon Osbourne, one of her counterparts on "The Talk."

After Oprah's exclusive interview with Harry and Meghan, the Duke and Duchess of Sussex, delivered a kick to the Windsor family's crown jewels in the court of public opinion, royalist Piers Morgan crowed doubts about Meghan Markle's painful confession about engaging in suicidal ideation. Since this was part of a sustained, frequently racist attack on the Duchess that's lasted since she married Harry, the public sided with Meghan.

Pricked by this reminder that he holds less power than Oprah and the Sussexes, Morgan resigned from his British daytime TV job.

Take it from me: if your famous friend publicly stepped on his own slappers, maybe you'd call him in private and offer some consolation. Not Osbourne, who took to Twitter (what is it about famous people not understanding how social media works?) to defend Morgan for "speaking his truth" before metaphorically dropping her trousers on "The Talk" and tearing into the Black co-worker Sheryl Underwood on live TV.

"I feel even like I'm about to be put in the electric chair because I have a friend who many people think is a racist. So that makes me a racist," she opines. "And for me, at 68 years of age, to have to turn around and say, 'I ain't racist.' What's it got to do with me?" Later she yells at Underwood, "Educate me!"  Now she has plenty of time to rock out and educate herself, since she split from "The Talk" after this debacle. She won't, though. Instead she's writing a book and working on a podcast.

Joe (Rogan) vs. the (science) volcano

Ordinarily I would have nothing but respect for a dude who takes a "balls to the wall" approach to living life, but that was before vaccine misinformation sullied my reputation, which was previously as smooth and clean as an egg!

Thanks in part to the former "Fear Factor" host who has made a fortune hawking supplements, millions of people believe that cocktails of said supplements and ivermectin – a veterinary de-wormer – are sufficient to battle COVID-19 even though these treatments aren't endorsed by medical and scientific community or the FDA.

In April, after the White House criticized his anti-vaccination comments on his podcast, he covered his jubblies by saying, "I'm not a doctor, I'm a f**king moron. I'm not a respected source of information — even for me."  Rogan could have used his powers for good from that point on, but no. He's since acted as a private horse paste consultant to the stars, with his most recent unofficial client being UFC president Dana White, who contracted a breakthrough case in early December.

He's even offered to fake vaccination cards for fans to help them circumvent vaccine requirements at businesses. The coins on this guy! I mean that literally: Rogan signed a $100 million deal with Spotify last year, where his podcast has become central to its subscriber growth. His fanbase is legion and increasingly difficult to avoid, present in the most neutral and wholesome spaces. That's just nuts.

Aaron Rodgers would like you to respect that he believes "strongly in bodily autonomy," which I get. Part of my role as an organ is to remind the guy to whom I'm attached that he has little say in what me or my brother, the twig to my berries, do as he enters puberty, when he wakes up in the morning or after he's had too much whiskey.

So when Rodgers claimed that right after contracting COVID – which followed his lying to his teammates, the NFL and reporters about his vaccination status – even I was not surprised.

Instead, the part of the Green Bay Packers quarterback's 2021 story that truly burns our fruit basket is knowing that Rodgers was in the running to become the next host of "Jeopardy!" – a TV institution dedicated to celebrating general knowledge of trivia that is based in empirical fact.

Granted, snake oil and goji berry pitchman Dr. Mehmet Oz also received a host audition, which isn't much better. Fortunately, and miserably, we eventually found out that none of the promotional tryouts that dragged through most of the year mattered anyway.

Imagine if it did, though. Rodgers received solid ratings during his tryout week which meant producers may have seriously considered replacing the intellectual, eloquent and pro-science Alex Trebek with a guy who lied to and exposed his co-workers to a potentially deadly illness and consulted Rogan to figure out how to treat his symptoms.

As you may have noticed, I am not deep, but I am very wide* – thanks to man-spreading, not any reaction to a COVID vaccine.

Still I recognize that after being reminded of all these examples of viral foolishness one might ask, what patient can trust the knowledge of a physician without reputation or furniture, in a period when publicity is all-powerful and when the government gilds the lamp posts on the Place de la Concorde in order to dazzle the poor? Oh wait – one* did ask that in, like, the 1800s.

In 2021 physicians have offices with chairs and stuff, and labs and vaccines and the means to end this pandemic, if we'll only listen. Advocates for racial justice are working tirelessly to slow our democracy's slide into oblivion, if only we'd heed what they have to say.

Today, as we wait for that big ball to drop and mark our roll into 2022, those of us with a firm grip on our faculties and our scallops can only hope that this worldwide interruption to our lives and collective sanity will retract at long last in the coming months. Because let me tell you, it hurts to be blue for this long.

*Our acknowledgement and sincerest apologies to the estate and ghost of Honoré de Balzac, paraphrased throughout this piece of work.