Smart Watch: Emmy snubbed "Brooklyn Nine-Nine," "Counterpart" and others. Let's watch them instead!

Emmy passed over a number of brilliant shows. But you don't have to. In fact, they may be more worthy of your time 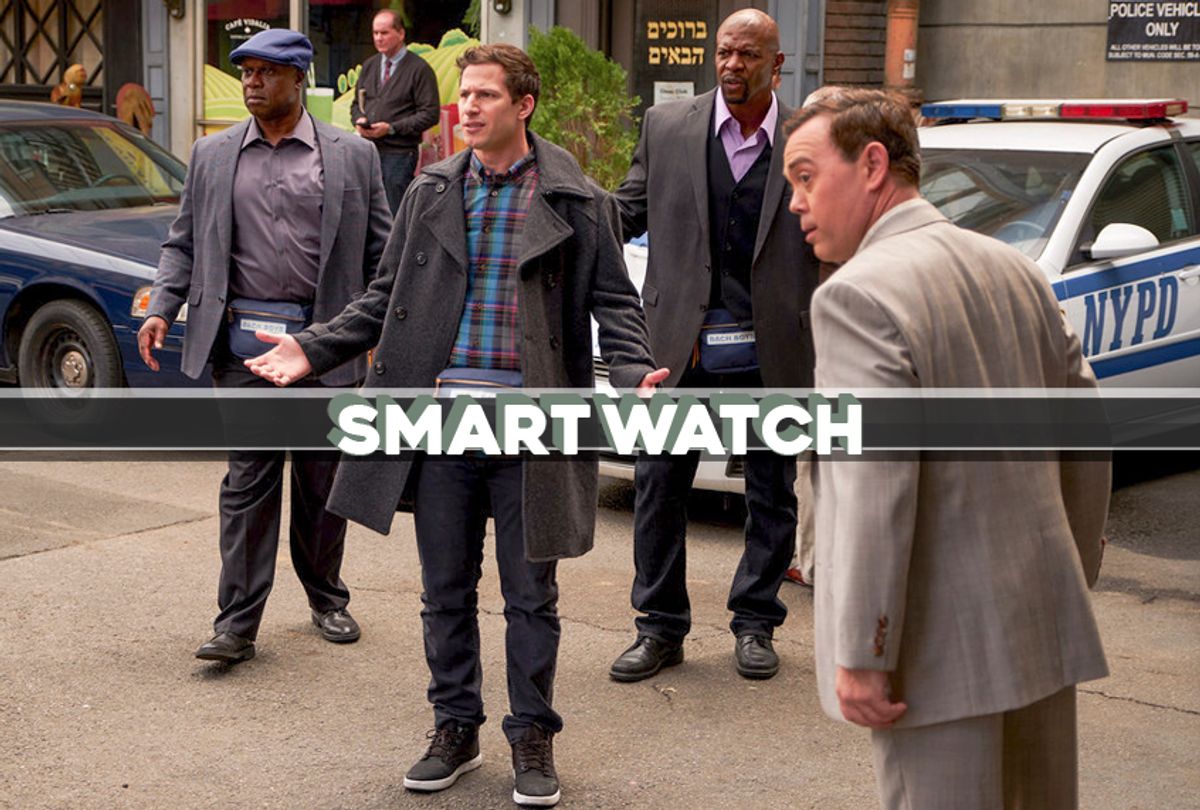 Confession: people like me accept the Emmy awards with the same sense of inevitability as tax day. At best the results confirm that those of us who love television are not alone in adoring the shows and performances that we boost and recommend. At worst they confirm that Emmy voters don't watch much TV, if any.

Regardless of this ennui, when it comes to the nominees, it very well may be the best night of the year. They get to put on nice clothes and borrow some jewelry from an upscale boutique, if they’re connected, and have a night out. It's an honor just be there, right?

But I can't imagine anyone else in their right mind planning so much as a tailgate party for this thing, though, especially since the 2018 Emmys telecast airs on a Monday this year. Specifically, it airs on Monday September 17 at 8 p.m. ET/ 5 p.m. PT, on NBC. Michael Che and Colin Jost of “Saturday Night Live” are hosting. Exciting! . . . No?

Be that as it may, some of the best series TV right now weren’t even nominated in major categories, if at all. May we suggest watching them instead?

Take “The Deuce,” for example, a stupendous drama showcasing some of the finest performances on television, particularly from Maggie Gyllenhaal. Emmy bestowed absolutely zero love upon that show. But it deserves your attention, and its readily available on HBO's streaming service.

Emmy’s account was empty for the outstanding cast of “Billions” too, even though Asia Kate Dillon, Paul Giamatti, David Costabile and Damian Lewis each poured themselves into their second season performances. Dillon, in particular, turned in some next-level scene chewing, which you can enjoy on Showtime Anytime.

We could go on and on, listing show after show denied the kiss of Emmy's glowing aura. But instead of lamenting how many series and performances were snubbed — this is not one of those pieces — let’s just pay some attention a select view you can reward with your attention.

There’s about a week before the regular 2018-2019 season officially kicks off, which is plenty of time to visit or reacquaint yourself with these series before the schedule jams up with premieres.

“An Emmy for Megan.” Technically this is a web series, but it’s extremely entertaining.  Just importantly, for the purposes of covering a lot of ground in a small amount of time, you can enjoy the entire thing in a single sitting since it’s just over 28 minutes long.

As you may have guessed from the title, “The Good Place” writer Megan Amram’s fictionalized spectacle was created specifically to land an Emmy nomination for Outstanding Actress in a Short Form Comedy or Drama Series, which she actually scored. After all, as she observes, “Acting is just writing with your mouth!”

Proving this, Amram turned in a winning performance as a fictionalized version of herself in which she weeps, sings, hosts celebrity guest stars, frets about her weight, and checks the diversity box, basically hitting all of the minimum requirements to put her in the running for the award.

Alas, she did not take home the golden guy at this year’s Creative Arts Emmy Awards. However, IFC has seen fit to laud her anyway with a linear television broadcast of her shameless attempt to score TV's most illustrious shelf ornament by airing all of “An Emmy for Megan” on the same night as the awards, Monday at 11 p.m. ET, 8 p.m. PT — i.e. by about its halfway point.

Just kidding, I hope and pray.

“Brockmire.” Speaking of IFC, did you know that the entire first season of Hank Azaria’s crude, wild, inebriated baseball comedy is available on Hulu? There, I just hipped you to a wonderful alternative to aching your way through Emmy night. The entire season can be gorged upon in under three hours, and handily that’s about as long as most awards shows tend to last.

Jim Brockmire, a baseball announcer whose epic meltdown leads him to become a meme as well as a legendary debauched drunk, somehow manages to remain a lovable sort of loser even in this era of men who feel entitled to dominate the world around them, and that is quite feat. Make no mistake, Brockmire would kill to be famous again, but he’s not an abusive jackass. He sleeps around and can’t commit and is a raging drunk but somehow manages to avoid coming off as a pig to the woman he can't admit that he loves, Jules (Amanda Peet). Imagine that!

The darker second season can be streamed with purchase at Amazon or iTunes.

“Counterpart.” Maybe on the other version of Earth featured in Justin Marks’ mind-bending spy thriller, J.K. Simmons is writing his acceptance speech on cards, along with the rest of the cast and producers, in preparation for the big night.

In this existence, neither the show nor its star (who plays dual roles as different versions of the same person — harder than one might suspect, since one is an office worker and another is a highly trained spy) were denied any recognition by Emmy voters. Starz apparently still has a ways to go to break the hypnotic hold its premium cable brethren have over the Television Academy's voters.

The first episode of "Counterpart" can be viewed for free on Starz’s website. But nothing’s stopping you from streaming the season via the channel’s on demand service. And that’s worth it, if only for a short time, to enjoy one of the most profound long-form ruminations on conflict, whether internal and individual or external and caused by the government.

Do it now and you’ll be well prepared for season 2, which we’re simply positive will score nominations next year. Well, we hope.

“Brooklyn Nine-Nine.” To be honest we’re just happy that NBC rescued this fantastic, underappreciated comedy from Fox’s cancellation. That means it’s going to be in the running for an Emmy next year, no matter what.

For the record, it already won a Golden Globe in 2014 for best television series, comedy, or musical, beating out "The Big Bang Theory," “Girls” and "Modern Family" and "Parks and Recreation." (Its lead Andy Samberg also scored an individual award that year). This does not mean it doesn’t deserve Emmy’s love; that it does, both for its unique and reliably solid humor in general and for several episodes that portrayed the coming out experience of Stephanie Beatriz’s Rosa Diaz with warmth, honesty — the brutal kind, in one respect — and sensitivity. And the fact that Emmy passed over Andre Braugher for his flawlessly deadpan (and, when called for, hysterically explosive) comedy performance is simply criminal.

The good news is that the entire series is available to watch on Hulu, which is sufficient to keep us sated until new episodes return in (alas!) midseason.

“American Vandal.” Not enough credit is given to creators Tony Yacenda and Dan Perrault for turning a dick joke into a legitimately funny season-long parody of the true crime genre. That takes skill. But the fact that said joke remained funny even after the rage of #MeToo exploded, a movement rife with stories about dicks exposing themselves to women who never gave their consent, is a testament to how strong the writing, directing and performances on this show are.

The second season of “American Vandal” is in full swing on Netflix and continues the toilet humor theme, only now the quest to absolve another high school weirdo revolves around a crime of gastrointestinal distress on a massive scale, earning the mystery perpetrator the nickname of the Turd Burglar.

Awareness of the conceit means season 2's are telegraphed more clearly than they were the first season, which mutes a bit of the joy and makes it even less likely that the second round of “American Vandal” will get a nod next year. But it's still highly entertaining thanks to its clever take on crime docs and devoted elevation of juvenile yuks.

But hey, its snubbed status puts it in the same realm as Netflix compatriot “BoJack Horseman,” a deceptively raw and emotionally unsparing drama often dismissed due to the fact that it’s an animated series about an anthropomorphized horse. That show's fifth season also rolled out on Friday, and between its new episodes and "American Vandal," and everything else on this list, that's more than enough content to keep your eyes peeled and brain entertained well past Tuesday, when the last Emmys post-mortem has had its run.

Just be careful not to sleep on the rest of the good stuff. With the fall TV floodgates on the verge of opening, who knows when you’ll have time to get to them otherwise?

The man behind the icon character Omar discusses how he masters the craft.