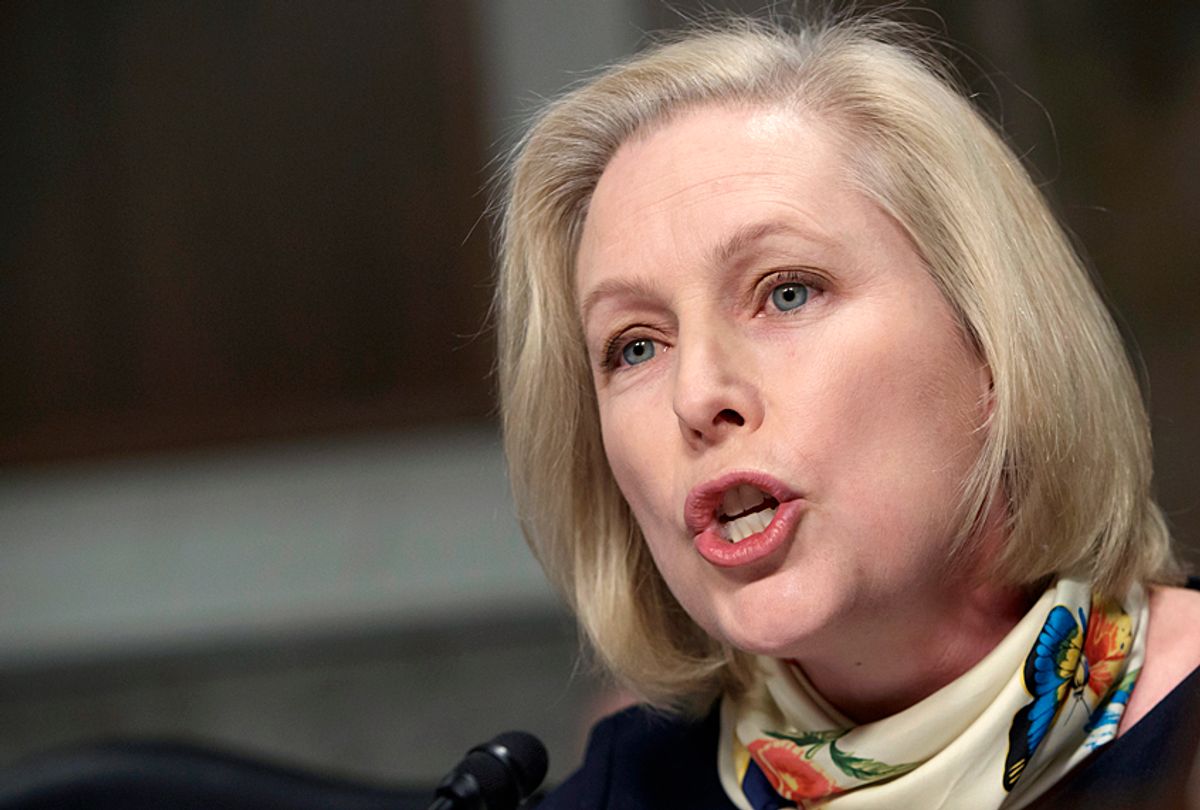 Sen. Kirsten Gillibrand (D-N.Y.) is expected to throw her hat in the ring to challenge President Donald Trump within days by forming an exploratory committee, the Associated Press reports. The New York Democrat will likely announce her intentions ahead of a trip to Iowa this weekend, a source told the news outlet, which also noted that Gillibrand is set to be a guest Tuesday night on CBS' "The Late Show with Stephen Colbert."

During her time in the Senate, the outspoken lawmaker has emerged as the face of Washington's reckoning with the #MeToo era. In 2017, Gillibrand was the first Senate Democrat to call on Sen. Al Franken of Minnesota, a fellow Democrat, to resign after multiple allegations came out of forcible kissing and touching, along with a viral photo of him as a comedian "jokingly" groping a sleeping colleague. “He groped me, without my consent, while I was asleep,” the radio host Leeann Tweeden said when she came forward.

Gillibrand has also said President Bill Clinton should have resigned from the presidency following revelations about his affair with White House intern Monica Lewinsky and has called on Trump to resign over sexual assault allegations. Even before #MeToo, Gillibrand introduced sweeping legislative reforms and protections for victims of sexual assault in the military and on college campuses. The senator's reputation of fighting the problems of sexual assault and harassment on Capitol Hill and beyond led "60 Minutes" to favorably brand her as "the #MeToo Senator" earlier this year.

Before leading the charge on issues around women and sexual harassment in the Senate, Gillibrand represented New York's 20th congressional district.  She was appointed to the upper chamber in 2009 to succeed Hillary Clinton, who left Congress to became President Barack Obama's secretary of state. Gillibrand swiftly won re-election, most recently in November, and, according to the AP, has "$10.6 million in her campaign fund, which can be used to jump-start a presidential bid."

Throughout her time in the Senate, Gillibrand has taken a number of positions favored by the progressive wing of the Democratic Party. She has come out in favor of a single-payer health care system, "Medicare for All," and a $15 minimum wage. In June, Gillibrand became the first U.S. senator to publicly call for the dismantling of U.S. Immigration and Customs Enforcement (ICE). She has also taken some version of a no-corporate-money pledge and said she supports a tax on financial transactions in the stock market — a proposal that would have once been unthinkable for a senator from New York.

While Gillibrand's outspokenness have drawn national attention, she is just one of names being floated as a potential challenger to Trump in what is expected to be a crowded Democratic field in 2020. Former Obama cabinet member Julián Castro and Rep. Tulsi Gabbard (D-Hawaii) have both formally declared their intention to run. Should Gillibrand decide to run, she would likely face further competition for the Democratic nomination from fellow Sens. Cory Booker (D-N.J.), Kamala Harris (D-Calif.), Bernie Sanders (I-VT.) and Elizabeth Warren (D-Mass.). Former Vice President Joe Biden and former Rep. Beto O'Rourke, who fell short in his campaign against Republican Sen. Ted Cruz in the Texas Senate race during the 2018 midterm election cycle, have also hinted that they are weighing a White House bids. Former Secretary of State John Kerry also recently alluded to mounting a presidential campaign — and these names are far from the complete list.

Still, Gillibrand appears to be moving aggressively to forge a 2020 presidential bid. This weekend, she is scheduled to lay the groundwork in Iowa, which holds the first-in-the-nation presidential nominating contest, and has "been in touch with some Iowa Democrats and enlisted the help of Lara Henderson, who was finance director for Fred Hubbell, the 2018 Democratic candidate for governor," the AP reported.