"The Problem with Jon Stewart" has a few issues, but nothing that a little tough love can't fix 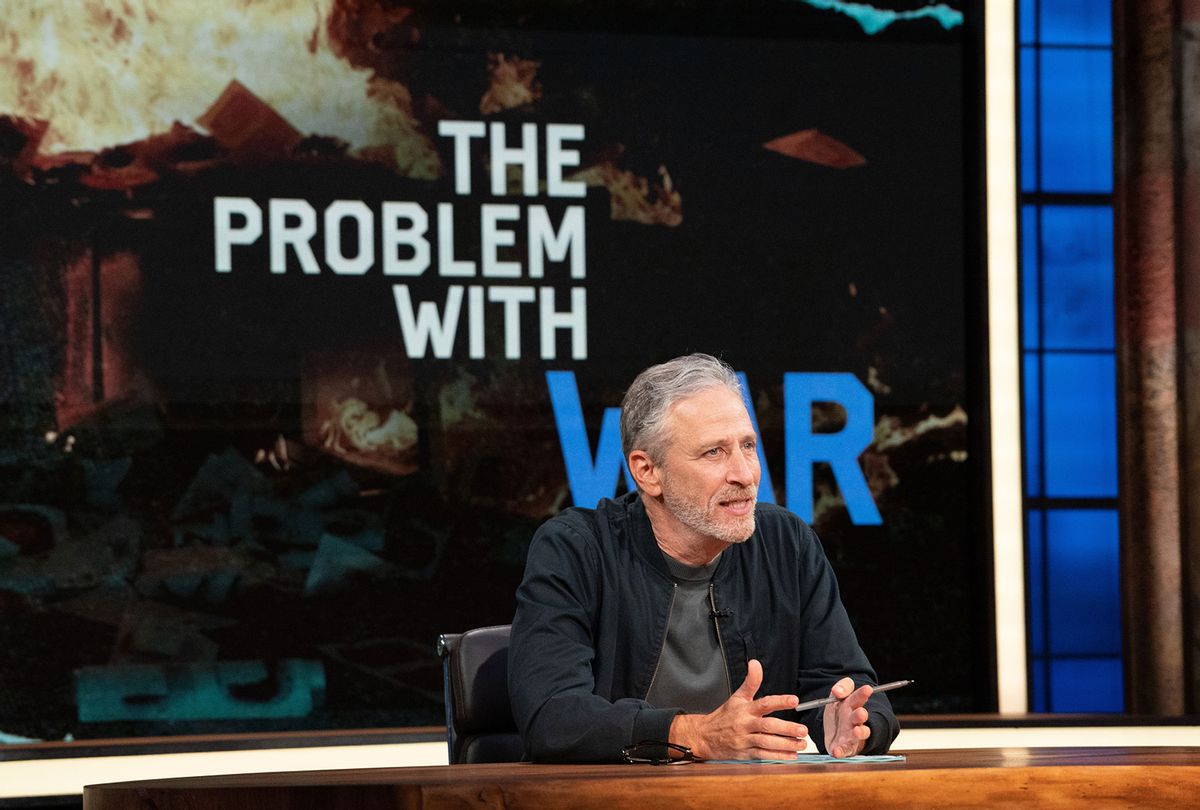 It is tough to resist the opportunity to go for the cute, simple sentence when pointing out that "The Problem with Jon Stewart" has, shall we say, issues to overcome.

Topmost is the host's refusal to let go of the "Daily Show" format he may not have originated, but definitively and successfully innovated.

More than six years after his final "Daily Show" broadcast, Stewart's method of blending cogent current events analysis with satire carries on through "Full Frontal with Samantha Bee," "Last Week Tonight with John Oliver" and "The Late Show with Stephen Colbert." Current "Daily Show" host Trevor Noah took what Stewart built and broadened his views to take in the world, not just the U.S., while speaking with authority to issues of race, class, and LGBTQIA+ rights.

You can even credit Stewart's successful "Daily Show" run for inspiring NBC to construct "Late Night with Seth Meyers" around political headlines instead of punchlines – acknowledging, of course, that Meyers is mainly playing to his strengths as a former "Weekend Update" host.

The field may not be full, but it is amply populated, to the point that other excellent topical comedy shows by "Daily Show" alums including Wyatt Cenac, Hasan Minhaj, Michelle Wolf and Larry Wilmore have come and gone.

Knowing all of this, what on Earth could Stewart possibly add to the whole "comic takes on news" gig? Why would he think that after his successors improved upon his means of punching up the news that he could bring something even fresher to the fray?

The answer may be a single word that begins with the letter H and ends with . . . OK, it's hubris. However, burying "The Problem" and scooting Stewart back to his farm and animal sanctuary shouldn't be the goal here.

Instead, let's borrow a conceit Stewart used often in his day and invite this audience of readers, which probably doesn't include him (but who knows?), to meet me at the imaginary equivalent of camera two. You know, for some real talk.

Asking because the first episode of your show is out there, and while it's great to have you back, it is not your best work. Even you acknowledge this when the live studio audience doesn't laugh at one of your brainier opening punchlines. Maybe the crowd is tougher. Maybe the joke didn't hit the mark as well as it did in rehearsal. It's probably a bit of both.

And we empathize with your situation. The world has changed since you raised "The Daily Show" from a toddler into a rebellious teenager. While you were semi-retired, your former co-workers and inheritors refined that style you perfected to stake out their own territories on the talk variety landscape, each familiar yet unique.

In the same way they have specific passions and areas of expertise, so do you. Just as the last five years have weathered all of us, they've also shifted your priorities. Semi-retirement has changed you, Jon, and not in a bad way.

Acknowledging that change is the key to solving "The Problem," if Apple grants you the space to do so and, more to point, if you choose to continue with it. Hopefully you will. People should realize by now that few series are the best versions of themselves in their first episodes, and that's doubly the case with news-comedy hybrids. With a few tweaks, what ails "The Problem" can quickly be cured.

The first is probably the most extreme suggestion: dump the guy-behind-a-desk schtick. Sure, the set is new, and that style is a genre standard, although Bee busted out by ditching the desk completely. Bill Maher's continued success with the panelist roundtables on "Real Time with Bill Maher" may have inspired you too.

But you're not Maher, or Oliver, or Bee, or any of those folks. That is not a quality judgment; it's a reminder of brand identity. Your brand has changed in the five-plus years since you've done this on a regular basis. Now you're the beloved older brother who drops by "The Late Show" to comfort and thrill the audience. More people know you as the passionate voice of reason who shamed Congress into extending funding for the September 11th Victim Compensation Fund through 2090.

"The Problem" clashes that Jon Stewart against the Ghost of Stewart Past.

You even acknowledge this, sir, in a production meeting segment featured in your series opener "War."  The episode looks at the disconnect between our public support for the men and women who serve in the military and our government's failure to provide adequate healthcare for them once they return to civilian life.

To illustrate this, you zoom in on the problem of toxic burn pits, the main means of large-scale waste disposal on military bases in places without existing infrastructure. In these pits, the episode shows, soldiers burn everything from equipment to body parts to feces – and the men and women serving breathe in the foul air that results. It is shocking.

You look closely at health risks they pose to men and women who serve, and the government's failure to adequately care for veterans who develop diseases, by soliciting the views of those who served and family members who watched their loved ones' health deteriorate.

And we see all of this before that production meeting snippet, where we see you and your writers bouncing relevant questions off one another before you interrupt. "This is the problem with the hybrid comedy shows," you say. "The whole time we're talking about this, I'm just looking at No. 1 with an asterisk" – referring to the list of ideas on a nearby white board – "snake penis."

See how you've unintentionally hit on what's doesn't feel right? You've anchored your episode in a real, painful issue with human cost, and brought a few of those humans in front of the camera with you.  This doesn't mean you can't insert some jokes at the grim absurdity of it all in there, but jamming skits into unnecessary act breaks is not the way to do that. (One of them, "Ken Burns Presents Ken's Burn," is embarrassing for both the PBS filmmaker and "The Problem."  Burns is clearly doing you a favor here; now, you owe him.)

Luckily by calling attention to this problem you have stumbled upon a better solution.

Once you've gotten rid of the studio audience, the stagnant set and the urge to shove jokes where the sun don't shine, embrace the Jon Stewart of Today.

This means acknowledging that you are an elder statesman in the comedy world.

Perhaps you find that term uncomfortable. Get over it.

The very fact that "The Problem with Jon Stewart" exists is evidence that you've attained that status. Throw in the respect you've earned as a First Responders advocate and all those old credits in the trust bank from back in the day when Gen Xers and millennials were supposedly getting their news from you, and guess what? You've more than earned your right to do serious interviews that aren't rolled in sugar.

David Letterman showed the way with his Netflix show "My Next Guest Needs No Introduction" which, in its first season, uses celebrity guests as Trojan horses to enter discussions of larger social and political issues.

But it's not as if you need some instructive pattern to guide you, Jon.

That first episode interview with Veterans Affairs secretary Denis McDonough demonstrated your ability to ply a respectful amount of skepticism in harmony with unfiltered B.S. detection. Surely viewers who are closer to the details of the topic will take issue with your argument, but that only works in your favor. It'll get people talking about the take instead of the host, you, which is what you want.

And if you can find away to blend that type of gravitas with the lively energy sparking throughout the second episode's conversation with dissidents from Egypt, Venezuela and the Philippines, that's a wonderful means of bridging your classic approach with something different, if not entirely new.

That second episode, "Freedom," contains hints of how that can might manifest even though it bears an closer resemblance to a version of old "Daily Show" that borrowed "The Nightly Show" table from a storage room. Leading off with classic Stewart rants about anti-mask, anti-vax hypocrisy reminds us of what we loved about you back in the day. Those kicked life into the studio audience, but at a cost: the comedown diverts some of the vitality away from the poignant conversation that followed about how dictatorships rise out of democracies.

"The Problem with Jon Stewart" is a work in progress, and there's absolutely nothing wrong with that. We've also only seen a few episodes. But one hopes that your and your creative team can find a way to emphasize the art of that equation. Wilmore, Cenac and Minhaj created brilliant work with "The Nightly Show," "Problem Areas" and "Patriot Act" by blending news and comedy that was perhaps ahead of their respective times. They left us too soon.

But you, Jon, are afforded a level of privilege they don't have, which Cenac brutally pointed out when your show was announced in April.

Don't be mad. Use your platform to elevate necessary conversations in ways that are distinct from what your peers are doing.

It matters little that your hair is silver and, to quote your own very harsh joke back at you, that you look like an anti-smoking poster. You don't, by the way, but you have returned to walls and furnishings that have a whiff of nicotine-stained staleness about them. Move out, move on, and don't be afraid to drop the old bits to spend the wisdom points you've gained. We're betting that if you do that, more people will be glad to listen to what you have to say.

"The Problem with Jon Stewart" premieres with two episodes on Thursday, Sept. 30 on Apple TV+, with new episodes released every other week.