I've gobbled up my favorite shows, and it left me feeling hollow. This year I'm reclaiming my time from streaming 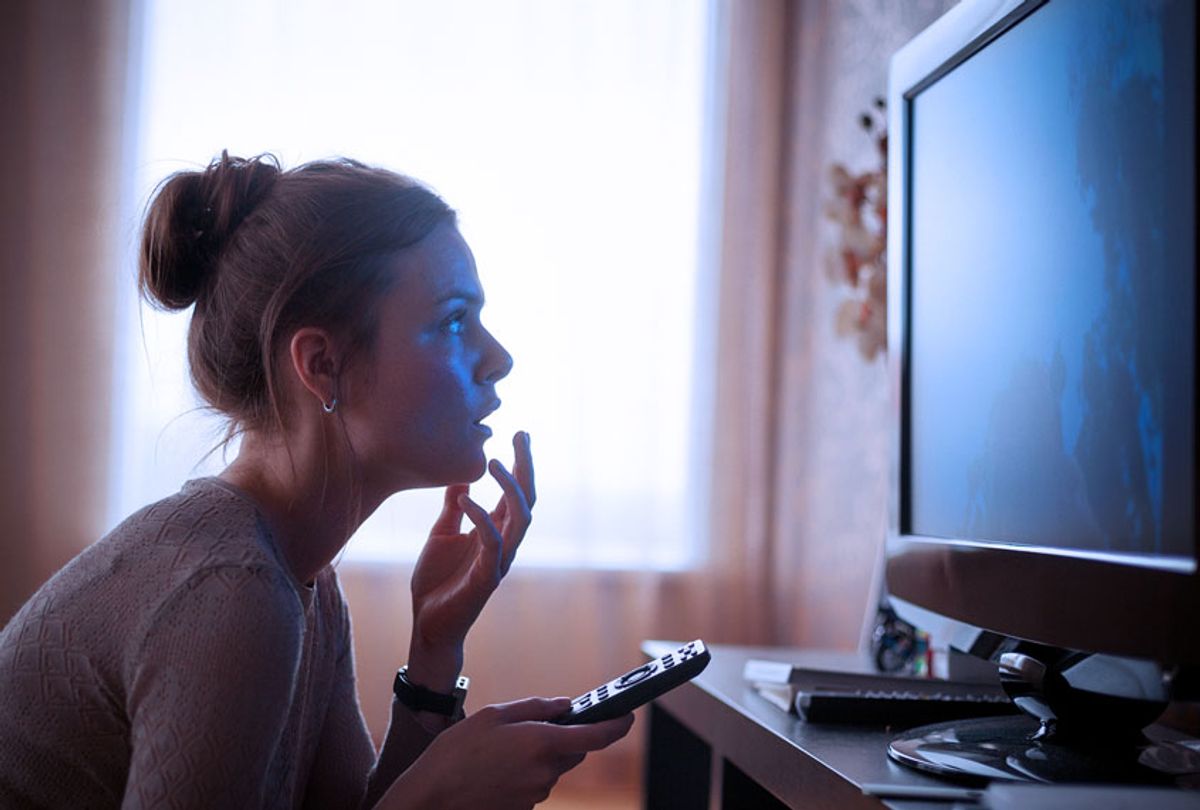 Woman up close to the TV (Getty Images)
--

Have you watched the second season of "You" yet? Seriously? It dropped a full eight days ago and it's only ten hours long, what's the holdup? You should have gobbled it all down by Tuesday, at the latest. Me? Oh, I've never watched it. But I've made up my mind that when I do, I'm going to take my sweet time.

"House of Cards" and "Orange Is the New Black" didn't invent the binge — movie marathons and "24 hours of..." syndicated sitcom blocks have been a staple of television for decades. And anyone who's ever stayed up till three in the morning glued to an impossible-to-put-down novel knows that the binge isn't confined to the screen. But when Netflix boldly dropped the entire first seasons of both shows at once in 2013, it entirely recalibrated the contemporary viewing experience. It offered high quality content in a fast food experience, like getting a Wagyu burger at the drive-through.

Five years earlier, "Dr. Horrible's Sing Along Blog" ushered in a new era of online entertainment, teasing out three episodes over three Internet-breaking days. Netflix — and then every other streaming service in its wake — took the model further, creating a string of drop-everything-and-just-watch-it hits as varied as "Dear White People," "Transparent" and "Stranger Things." Racing to consume and then discuss an entire season's worth of narrative became a new pastime and competitive sport. And the binge has never been just for groundbreaking new shows. It's also ideally suited to an end-of-the-day collapse in front of old episodes of "Friends," when the thought of physically pressing a button to watch the next episode feels too taxing.

It's not like the traditional week-to-week format has withered and died; maybe you've heard of a little show some people enjoyed called "Game of Thrones." Breakout series like "Killing Eve" and "The Good Place" have benefited from their traditional cliffhanger formats, and "The Handmaid's Tale" requires at least a week to recover from before each new episode. But the binge undeniably changed television, and it changed us.

A study out of the UK Journal Scientific Reports last year found that individuals who watch more that 3.5 hours of television a day experience a higher rate of verbal memory decline that those who watch less. But who can watch less when the content just keeps autoplaying? In a study out of Rowand and Temple Universities published in "Convergence" in 2018, the authors sagely note that "Stating that you are a binge-viewer . . . is less a confession of weakness than it is a proclamation of your cultural and technological bona fides." But they also reported that their subjects "used terms associated with addiction (compulsion, withdrawal, overdose, habit, functional binger) to describe their binge-watching" and that several "admitted to being less productive or missing work because of long binges."

And in a 2017 NBC News report, clinical psychologist Dr. Renee Carr explained it simply. "When engaged in an activity that's enjoyable such as binge watching, your brain produces dopamine," she said. "Your body does not discriminate against pleasure. It can become addicted to any activity or substance that consistently produces dopamine." Which is why it's so hard to stop and you feel so gross when you do.

I know those highs and lows, and I have known them often and well. On a deadline — and frankly enjoying the immersive, all-in experience of the show — I plowed through most of the third season of "The Marvelous Mrs. Maisel" in a single recent weekend. The series itself was a delight, but the transitions made me anxious and jumpy. Each episode, I'd sink into a few beats of whatever anachronistic pop hit was unfolding over the end credits, and then blam, Elvis Costello or John Lennon would abruptly cut off as the next episode launched. Yes, I could have gone back and watched the credits in full; yes, I could have closed my laptop and walked away altogether. But the undertow was strong and I was weak. And now, not very long after watching all eight episodes, I realize I didn't really digest them very well. Where was it that Susie learned to swim? Why did that house have to burn down? The whole season blurs together in my mind, much like Anderson Cooper's New Year's Eve probably did after that Jäger shot.

It's a familiar sensation, one I experienced again and again over just the past year alone. New season of "Fleabag" at last? Chug! "GLOW"? Chug! "Russian Doll"? What is it? Never mind, chug! I have lapped up my entertainment like a goldfish who's just been sprinkled with a whole container of Tetra flakes. Then, bloated and confused, have I found myself going back and rewatching episodes I hadn't fully grasped the first time — usually while simultaneously bidding for boots on eBay. I truly love all of those shows. I also couldn't tell you honestly that I've fully and attentively watched any of them.

In contrast, I somehow managed to spend the past fall languorously savoring the first and second seasons of "Succession" on Amazon. I'd watch an episode, rapt, spend several days thinking about it and then return to the next one. The charge of anticipation far outweighed the gratification of frenzied consumption. It was the same pleasant, sustained enjoyment I'd experienced earlier in the year, watching "Pose" week after week. I didn't want to hurry through a moment of it, and then, I wanted to not hurry some more.

The incessant deluge of information we all take in every day is overwhelming, and it is not great for the ever increasing numbers of us who are living with anxiety and depression. The saturation is addictive; it's also distressing.  No wonder, then, that the past few years have seen a meteoric movement toward decluttering, whether it's tidying up a home or pruning down a closet. I've lately found myself longing to declutter my entire life, looking for spaces in my time and making an effort to avoid frantically filling them. Books like Jenny O'Dell's "How to Do Nothing: Resisting the Attention Economy" (read an excerpt here at Salon) and Celeste Headlee's forthcoming "Do Nothing: How to Break Away from Overworking, Overdoing, and Underliving" have become my bedside guides, helping me learn again what used to be instinctive. The art of backing off. Slowing down.

I used to think of binge watching as my reward for overworking; now I see it as part of the same dysfunctional relationship with time I've had all along, and another set of obligations to tether myself to. I  never feel rested and nourished after binging through a season of a show I love; I feel at best momentarily successful. So I'm trying to change that. I quit social media in 2018, and though it took me months to stop thinking in tweets, I love the parts of my life and my brain that breakup cleared for me. Similarly, right now, it's hard for me to watch an episode of "The Crown" — yes, I'm still watching "The Crown" — and not immediately start another one. But I think about how much I adore going to the movies, and the joy of a darkened theater and a set time limit. I want more of that. Quitting binging may seem like a small and strange resolution, but it represents a reclaiming of the time I currently passively hand over to my streaming services. It's a chance to take a step away from immediate gratification and cultivate a measure of patience, even when I'll have to use all my restraint not to charge through the final episodes of "BoJack Horseman." But I think this way, the odds are better I'll actually remember it when I'm through.