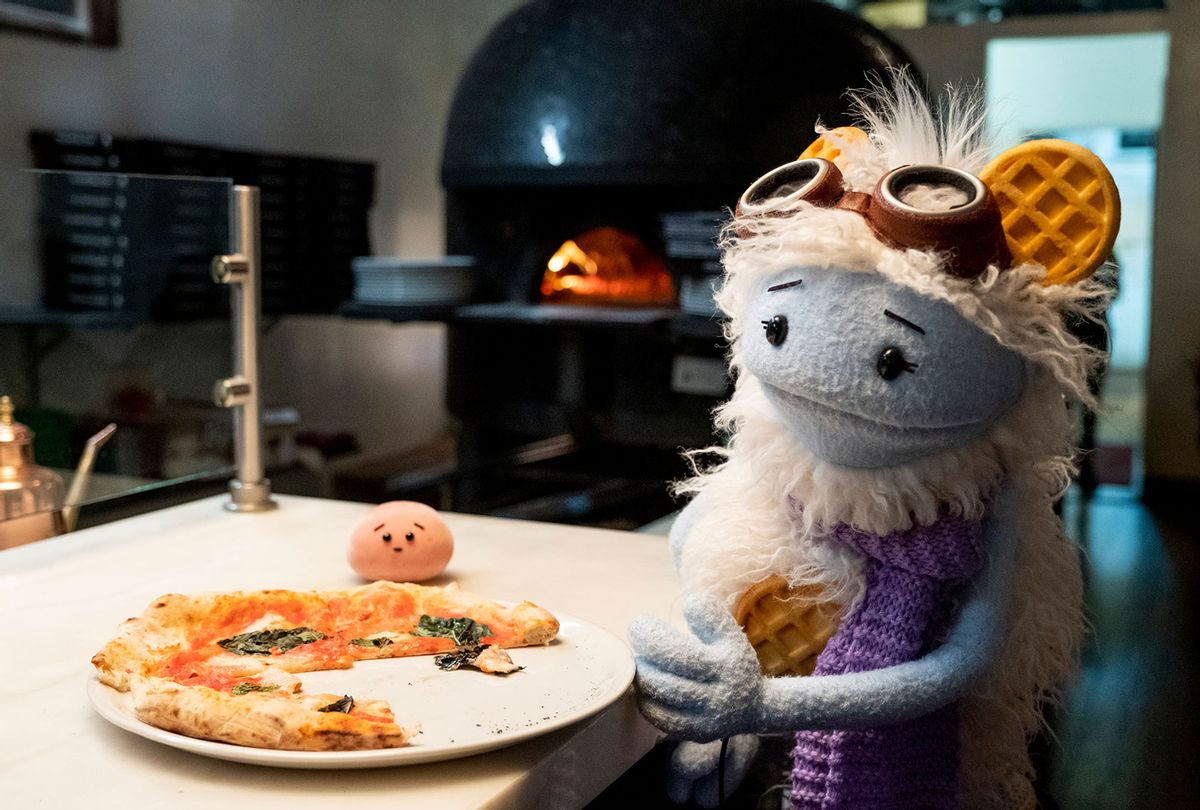 Of all the unsung heroes of the pandemic, I never expected to find inspiration in two zany, food-obsessed puppets. Netflix's new show, "Waffles + Mochi," follows the journey of the hyperactive Waffles and meeping Mochi as they leave the Land of Frozen Food for a stranger and more colorful new world: the American supermarket.

Part travelogue, part children's education program, "Waffles + Mochi follows" the eponymous puppets' journey as they learn about food: where it comes from, how to prepare it, and the stories it holds. As the newest (and certainly most unqualified) employees of the supermarket, Waffles and Mochi whiz around the world to tackle culinary mysteries: Is a tomato a vegetable or a fruit? What makes a potato magical? What exactly is umami?

Although the show follows in the wake of influential children's television programming like "Mister Rogers' Neighborhood" and "Sesame Street," it takes a decidedly trippier stance. Magical realism threads each episode — there are psychedelic dance parties, animation interludes, and a bubbly maelstrom of puppet chaos. The owner of the supermarket, Mrs. O (the stately Michelle Obama), is the perfect foil to the slapstick comedy of Waffles and Mochi. She also acts as the larger voice of reason, ending each episode with a tidy platitude. "Family comes in all shapes, sizes and colors," she says in the "Rice" episode, her voice rich with wisdom. "It's not always the people who are born into your family, but the people who make up your community."

Since its release, "Waffles + Mochi" has been met with critical acclaim, particularly for its inclusivity. Produced by Higher Ground, Barack and Michelle Obama's media production company, the show displays the family's trademark diplomacy by breaking from the Western-centric tradition of food. Instead, "Waffles + Mochi" emphasizes the broader intersectionality of identity, ancestry, and food. In Japan, Waffles and Mochi visit a mushroom farm; in the high mountains of Peru, they cook potatoes in a huatia; in Savannah, Georgia, they learn about rice plantations during chattel slavery. As Jen Chaney noted in her Vulture review, "even the occasional heavy moment is handled with a light and openhearted touch."

But what's most striking about "Waffles + Mochi" is the puppets' sheer curiosity about food. Hailing from the Land of Frozen Food, where they only ever ate ice cubes, Waffles and Mochi literally start from a culinary ground zero. In other words, everything is brand spankin' new: A tomato! A potato! Six different types of salt! For this eccentric duo, the world is full of delicious intrigue, and they explore it without judgment or shame. The idea that food is neither inherently good nor bad seems revolutionary, radical even.

It's here I should confess: I struggle with an eating disorder. I started starving myself in sixth grade. The occasion itself was nothing special — I was just another chubby girl tired of fat jokes. To lose weight, I created a list of rules: no meat on weekdays, no snacks, three hundred sit-ups a night. Within a month, I'd lost five pounds. People started noticing. "What's your secret?" a friend's mother asked in a conspiratorial whisper. I shrugged, trying to contain my smile.

A curious thing happens when you have an eating disorder — you become unduly obsessed with the very thing you're trying to avoid. I started daydreaming about meals I'd never consume:  chicken pot pie, fried rice, Doritos drizzled with spinach artichoke dip. I memorized the calories of every snack in my pantry. I kept Roald Dahl's "Fantastic Mr. Fox" by my bedside table, and on nights where hunger rattled my ribcage, I read passages with a deep, shameful pleasure that bordered on pornographic. "Get any thinner and you'll disappear," my father joked, but he started to wake up early to cook me lavish breakfasts: waffles, eggs, pancakes, bacon, skim milk and orange juice.

By high school, I was hospitalized with anorexia. Although my teenage self pitched a holy fit, I was secretly relieved to be committed under professional care. Starvation mode was a full-time job, but a particularly s**tty one, without any benefits or pay. Not to mention it was deadly — anorexia has the second highest mortality rate of any psychiatric disorder, after opioid abuse. Hitting rock bottom meant that finally, after all those years of restriction, my only solution was what I craved all along: to eat.

Over the past decade, my recovery has waxed and waned. This is not uncommon — like grief, recovery from an eating disorder is not linear and may take a lifetime. In my mid-20s, I discovered a passion for cooking, transforming my relationship to food once again. I read "Salt, Fat, Acid, Heat" cover to cover and wrote notes in the margins; I stocked my refrigerator with grass-fed butter and farm-fresh produce; I spent long winter evenings simmering and stirring beans over the hot stove. Finally, I reckoned, my relationship to food was healthy. My body no longer felt like a trap.

But the pandemic changed all that. For many Americans, the stress of isolation, restricted exercise, and working from home has led to weight gain. One study found that nearly 22% of Americans had put on weight in the past year — hence the popularity of "at-home workout videos" and the infinite variations of "COVID-15" memes. For most people, pandemic-induced weight fluctuation is just an annoyance, fodder for a New Year's resolution.

But for folks with an eating disorder, the fear of weight gain is a constant, traumatic trigger. A study in the International Journal of Eating Disorders found that over 60% of people with anorexia are experiencing increased symptoms during the pandemic, and the National Eating Disorder Association hotline is fielding an unprecedented number of incoming calls. If you felt trapped in your body before the pandemic, just imagine what it feels like now. It's no wonder that people are reaching for whatever sliver of control they can find — like food.

During this past year, I've relapsed into my eating disorder. I avoid mirrors at all costs. I wear baggy sweaters. When I wake up to pee in the middle of the night, I start hyperventilating about the size of my thighs. I still love to cook, but now I fear eating. The cruel logic of an eating disorder poses an impossible paradox: to love your body is to make it disappear. Amidst a global pandemic, racial inequity, and climate disaster, the last thing I should be worrying about is the size of my jeans, but alas. Here we are.

Which is precisely why watching "Waffles + Mochi" has been a healing experience. As the puppets waltz through the aisles of the supermarket, asking silly and important questions about food, I find myself on the edge of my seat, eager for the answers. Silly as it may seem, I'm inspired by the way Waffles unpacks her fear of fungi and how Mochi falls in love with a potato. They tackle the mysteries of food with the courage and gusto a recovering anorexic can only dream of. Witnessing their unabashed enthusiasm for food feels like a catharsis, a reconciliation for all my years of restriction, rules, and shame.

To be clear, "Waffles + Mochi" hasn't magically "fixed" my eating disorder. But things have started to change, little by little. Wandering the grocery store no longer induces panic. Rather than eat alone, I now sit down to communal meals with friends and roommates. I've joined a virtual eating disorder support group where people share their own struggles with body, identity, and shame. And sometimes while cooking dinner, I break out into spontaneous dance parties.

Still, I know that recovery from my eating disorder will probably take a lifetime. In all likelihood, I'll continue to examine my stomach from multiple angles and an innocent slice of cake will fill me with dread. But "Waffles + Mochi" has given me something I haven't felt in a long time, especially during this lonely stretch of pandemic: hope.

Bethany Kaylor is a writer and illustrator in Berkeley, CA. Her essays and short fiction can be found at CrimeReads, DIAGRAM, Mid-American Review, Hippocampus Magazine, LitHub (forthcoming), and elsewhere.