What to watch on Netflix in January, from a "That '70s Show" spinoff to a nonlinear heist adventure 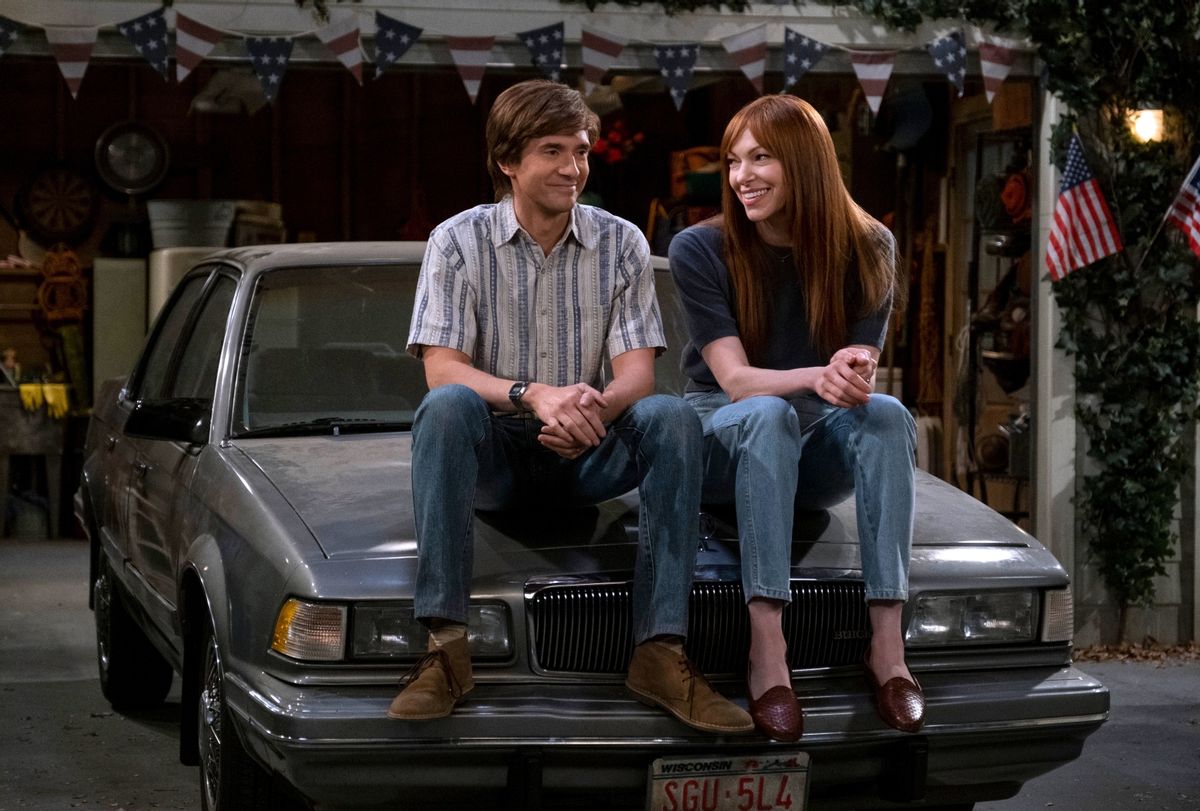 When it comes to New Year's resolutions, making them is a piece of cake but actually keeping them is a challenging feat. Sometimes a goal is too vague or too unrealistic, which makes it all the more difficult to accomplish. Thankfully, Netflix is here to help in that arena, especially if one of your 2023 resolutions is to binge more good shows, movies and documentaries.

This month, the streaming giant is releasing international reality TV, thrilling documentaries, family-friendly showcases and plenty of literary adaptations. For fans of the self-proclaimed social experiment reality series "The Ultimatum: Marry or Move On," be sure to check out the second part of its French rendition, which is out on Jan. 6. If true crime content is more your cup of tea, you don't want to skip "The Hatchet Wielding Hitchhiker," a documentary on Kai the Hatchet-Wielding Hitchhiker's 2013 murder conviction. Of course, there's also more lighthearted entertainment available, including the second season of "Kung Fu Panda: The Dragon Knight" and the 2010 rom-com "Leap Year."

What to watch on Netflix in December, including Letterman's Zelenskyy interview and a new Pinocchio

Here's some of the new and must-watch entertainment coming to Netflix this January:

This is not your typical heist drama — like "Money Heist" or "Lupin" or "The Great Heist" – in which a linear narrative if provided from the assembling of a team to the heist and then the aftermath. Instead, "Kaleidoscope" is a nonlinear series that randomizes the order the episodes play for each viewer, meaning they may to watch in a different order from their friend. Regardless of the sequence in which the series is watch, each viewer should be able to piece together the timeline of the heist – leading to the ultimate finale.

Tatsu, a former-yakuza-boss-turned-househusband, is back for a second season of household chores and domestic living. Despite his bad-boy appearance and intimidating persona, Tatsu takes his job quite seriously so he can support his wife Miku, the breadwinner of their household.

Called "Gokushufudo" in Japanese, "The Way of the Househusband" is based on a manga series of the same name, written and illustrated by Kousuke Oono.– Joy Saha

03
"MADOFF: The Monster of Wall Street," Jan. 4
The four-part series explores Bernie Madoff's infamous $64.8 billion global Ponzi scheme, in which he defrauded thousands of investors out of tens of billions of dollars over the course of approximately 17 years. Madoff, who was the former NASDAQ chairman, was charged with money laundering, securities fraud, and several other felonies and sentenced to 150 years in prison on June 29, 2009. – Joy Saha
04
"The Lying Life of Adults," Jan. 4
Based on Elena Ferrante's 2019 novel of the same name, the six-episode Italian-language series follows a sheltered teen named Giovanna who befriends her estranged aunt in an attempt to learn more about herself and her family's fallout. Set in 1990s Naples, the series stars Giordana Marengo as Giovanna, Valeria Golino as her aunt Vittoria and Alessandro Preziosi and Pina Turco as Giovanna's father and mother. – Joy Saha
05
"Ginny & Georgia" Season 2, Jan. 5
Buckle up peaches! Ginny and Georgia, the dysfunctional mother-daughter duo, is back for more drama in the idyllic town of Wellsbury. Season one ended on a major cliffhanger, with Ginny — along with her little brother Austin — running away from home after learning that her mother murdered her ex-husband with poison from her beloved wolfsbane plant. Georgia's plant has also been burned to smithereens, leaving her more mad than sad about her childrens' disappearance. Antonia Gentry and Brianne Howey reprise their titular roles alongside Scott Porter, Felix Mallard, Raymond Ablack, Katie Douglas and Sara Waisglass. – Joy Saha
06
"The Pale Blue Eye," Jan. 6
The mystery thriller, based on Louis Bayard's 2003 novel of the same name, follows veteran detective Augustus Landor (Christian Bale) who investigates a gruesome murder at the United States Military Academy with help from a young cadet named Edgar Allan Poe (Harry Melling) Set in 1830 West Point, New York, the film also stars Gillian Anderson, Lucy Boynton and Robert Duvall.– Joy Saha
07
"The Makanai: Cooking for the Maiko House," Jan. 12
Director Hirokazu Kore-eda of Cannes-winning "Shoplifters" fame and the recently acclaimed "Broker," turns to television with this live-action adaptation of the award-winning manga series "Kiyo in Kyoto" by Aiko Koyama. It's a good fit as Kore-eda can bring his contemplative style and unhurried pacing to tell the story of Kiyo (Nana Mori), a young woman who – with her childhood friend Sumire (Natsuki Deguchi) – moves to Kyoto to become maiko, geishas in training. However, Kiyo soon realizes that her skills do not lay with that art but with cooking delicious, soul-warming meals for her friend and the other maiko. Have comfort foods like omurice or curry on hand because you're bound to get hungry watching this charming series. – Hanh Nguyen
08
"Break Point," Jan. 13
From the creators of "Formula 1: Drive to Survive" comes "Break Point," a 10-episode docuseries that focuses on one thing and one thing only: tennis. It follows a new generation of tennis players, both on and off the courts, as they fight to fill in the top spots that were left behind by the sport's legendary yet retiring athletes. Being a young and professional tennis player is not an easy career, and the series proves exactly that through intimate footage of the players competing in tours, recovering from injuries, coping with emotional heartbreak and celebrating personal victories. – Joy Saha
09
"That '90s Show," Jan. 19

With Netflix's spinoff, the gang's next generation of offspring take us back to Wisconsin, but this time to 1995. Eric and Donna's daughter named – what else? – Leia (Callie Haverda) is spending the summer in Point Place with her grandparents Red and Kitty Forman (Kurtwood Smith and Debra Jo Rupp reprising their roles) where she befriends Jay Kelso (Mace Coronel) the son of Jackie and Michael, among other teens.

While the series will no doubt go hard on '90s nostalgia, that means the majority of the "That '70s Show" original cast of friends will turn up (sans Masterson of course) as guest stars. Also joining in the fun will be Don Stark, who had played Donna's dad Bob, and original pothead Tommy Chong, returning as Leo.– Hanh Nguyen

10
"Bake Squad" Season 2, Jan. 20
Hosted by Milk Bar founder Christina Tosi, the second season of Netflix's "Bake Squad" will see the return of four bakers: cake decorator Ashley Holt, pastry chefs Christophe Rull and Maya-Camlle Broussard and chocolatier Gonzo Jimenez. The group will take part in some light competition, meaning there's no prizes or elimination rounds, to see whose elaborate dessert will be chosen for a client's special day, be it a celebration, wedding or birthday.– Joy Saha
11
"You People," Jan. 27
The buddy comedy examines "modern love and family dynamics amidst clashing cultures, societal expectations and generational differences," as described by Netflix. Directed by "Black-ish" creator Kenya Barris and co-written with Jonah Hill, the film stars Eddie Murphy, Hill, Julia Louis-Dreyfus, Lauren London, Sam Jay, Molly Gordon, Mike Epps, Nia Long, Deon Cole, Rhea Perlman and David Duchovny.– Joy Saha
12
"Cunk on Earth," Jan. 31
Do you miss Charlie Brooker and "Black Mirror"? Too bad because this isn't it. Brooker does, however, return to familiar ground for his British fans with Philomena Cunk, the silly and somewhat dim-witted investigative journalist played with zeal by Diane Morgan in many of Brooker's UK projects. In this BBC-produced mockumentary, she travels the world to probe the wonder of the pyramids, which she calls "bricks in a triangle" and ask the hard questions like whether or not China also has a roof to go with its wall. Similar to Sacha Baron Cohen's faux interviewer Ali G, Cunk will sit down with various celebrities like Hugh Grant and Tracey Ullman, along with academics who may or may not be in on the joke. – Hanh Nguyen
13
"Pamela, a love story," Jan. 31

The highly anticipated documentary, released in conjunction with her memoir, finally sets the record straight on Pamela Anderson's story. Per a Netflix synopsis, "Pamela Anderson is ready to tell her story in a new documentary. In her own words, through personal videos and diaries, Pamela Anderson shares the story of her rise to fame, rocky romances and infamous sex tape scandal."

The documentary comes after Hulu's "Pam & Tommy," which encouraged Anderson to break her silence and finally come forward with her story herself. As for whether Anderson will watch her showcase, she told The Hollywood Reporter, "The documentary I haven't seen, and I have no intention of seeing. I gave full access to my archives and diaries, and I hope that through full transparency, it makes sense to somebody."

about what to watch on Netflix: